Kawira Mwirichia see her work as “an act of love.” 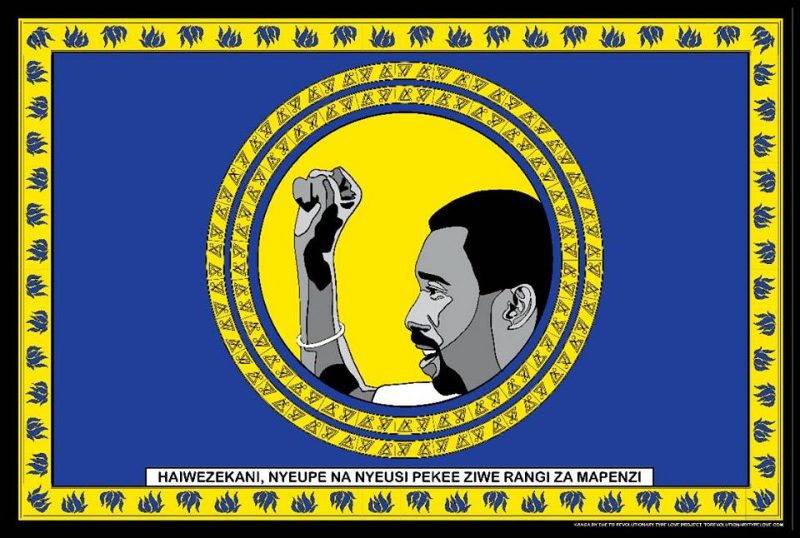 The “kanga,” the vibrant East African textile featuring Swahili proverbs, is widely known as “the cloth that speaks.” For centuries, women have exchanged them as gifts, often to communicate messages that would be otherwise taboo.

The Kenyan visual artist Kawira Mwirichia took the power of the kanga to a new level in a recent exhibition at the Goethe Institute in Nairobi, Kenya that ran from May 17-June 3, 2017. Entitled “To Revolutionary Type Love,” the show celebrates queer love and condemns homophobia by amplifying the messages of queer leaders from 35 different countries through original kanga designs.

Each of the kanga on display represents a country’s unique history regarding the struggle for equal love. For Mwirichia, inspiration struck while attending a friend’s wedding in 2013, where she witnessed the “laying out of kanga for the bride to take to her new family — a gesture that the Kenyan queer community wouldn’t receive,” she explained.

Seeing that Kenya is a very homophobic country, that’s something that really touched my heart and I wanted to create something that would celebrate our love.

Mwirichia puzzled over ways to use the kanga to “lay down and create a path to queer love.” Troubled by her country’s religious and patriarchal repression of queer expression as an illegal and immoral practice, Mwirichia wanted to make a statement through the kanga: Queer love, and queer stories matter. She asked members of Kenya’s LGBTQIA (Lesbian, Gay, Bi-Sexual, Transgender, Queer, Intersex, Asexual) community to submit quotes about love which she later matched to her kanga designs.

Mwirichia partnered with Tindi Amadi to conduct extensive research on each country’s history of sexual identity politics. For Mwirichia, the process affirmed the urgency of amplifying the voices of queer leadership around the world.

Access to information on the history of queer activism varied according to each country's culture and context. For example, Mwirichia and Amadi struggled to capture Bahrain's queer history due to its repressive stance on LGBTQIA politics; while in Andorra, where the LGBTQIA community experiences relative freedom, there has been little need for activism aside from the fight to allow gay men to donate blood. Mwirichia and Amadi gathered each country's symbols and stories and used them to produce a vibrant collection of unique kanga, each dedicated to a single country, featuring motivational messages of hope, courage, and love.

On May 17, as the world celebrated IDAHOBIT (International Day Against Homophobia, Transphobia, and Biphobia), Mwirichia held a “To Revolutionary Type Love” (#TRTL) launch party, creating a “safe space where love was celebrated with art, music, and conversations.”

The exhibition received an outpouring of praise from the over 250 guests who attended throughout the two-week period, which extended into Pride Month in June. In tandem with the show, Mwirichia and her team continued the celebration of queer love on social media with daily shout outs to queer music, fashion, and creative culture.

A unique space here at the #TRTL, honoring the spirit of #IDAHOBIT2017
A #diverse group of queers and allies
https://t.co/BRJa4Kv5qQ

Of the 35 kanga on display, Mwirichia dedicated nine to countries on the African continent, including Kenya and Uganda. Of Africa's 57 nations, at least 37 currently criminalize homosexual acts.

The Uganda kanga quote submitted by AFRA (Artists for Recognition and Acceptance) states: “Twapenda Mahaba, Wala Hatuombi Msamaha” which translates from Swahili as “Because we love ‘love’ and make no apologies for it.“

The central image features activists Kasha Jacqueline Nabagesera and the late David Kato, who was bludgeoned to death in his home just weeks after attempting to shut down a local tabloid for outing gay people. The kanga honors the two activists as the “mother” and “father” of Uganda’s gay rights movement as well as FARUG (Freedom and Roam Uganda) and SMUG (Sexual Minorities Uganda), organizations they founded together. 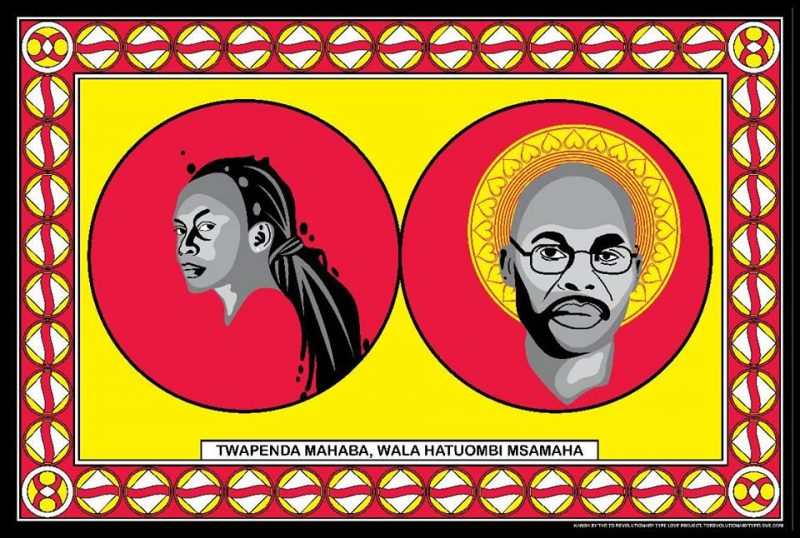 ‘Uganda,’ by artist Kawira Mwirichia, ‘To Revolutionary Type Love,’ 2017, permission by the artist.

The Kenya kanga quote submitted by Ivy Gatibaru reads “Penzi Langu Halali,” meaning “My love is valid” in Swahili. According to the exhibition catalog, its design was inspired by the band Art Attack and their cover of the song “Same Love,” which sparked a national conversation about queer love in Kenya.

The design is also a shout-out to the National Gay and Human Rights Commission (NGHRC) for their work in confronting the Kenyan government's institutionalized homophobia and The Nest Collective for sharing powerful multimedia queer stories, including the critically acclaimed queer anthology film “Stories of Our Lives.” 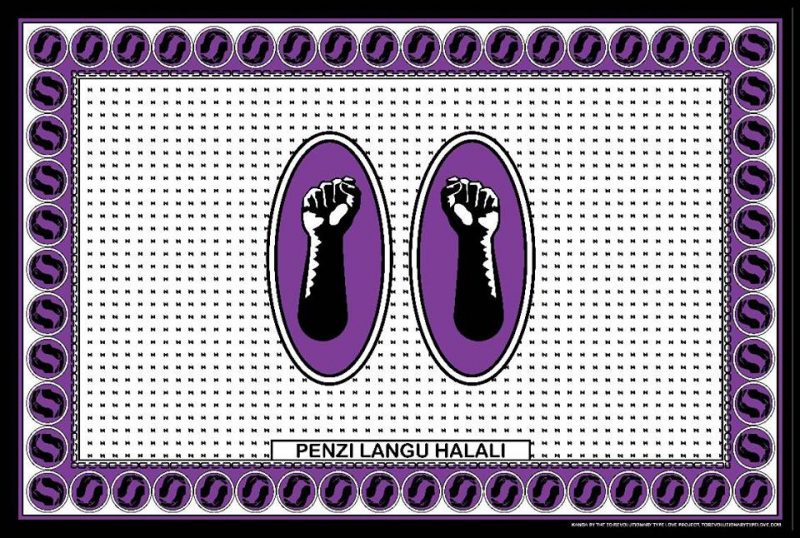 ‘Kenya’ by artist Kawira Mwirichia, ‘To Revolutionary Type Love,’ 2017, permission by the artist.

While the East African LGBTQIA movement has made significant strides toward equality, activists still struggle daily against oppression, humiliation and human rights violations. Ugandans face life in prison under the Uganda Anti-Homosexuality Act, 2014, and LGBTQIA citizens have no legal protections. Kenyan law also fails to protect its LGBTQIA community. In a 2011 study by the Kenyan Human Rights Commission, 89% of people who came out reported that their families disowned them.

Even in places like South Africa and the United States which have long-standing and hard-fought LGBTQIA movements, the struggle continues. US President Donald Trump recently banned transgender people from serving in the military, and the US Justice department announced that a major federal civil rights law does not protect gay people from workplace discrimination.

At this critical moment in LGBTQIA history, the impact of Mwirichia’s revolutionary project has reverberated across a wider platform.

The company We Transfer launched the ‘Championing Diversity’ initiative online, identifying nine leading LGBTQIA creatives who were then asked to nominate the top emerging LGBTQIA creatives to curate We Transfer’s online wallpapers. The multidisciplinary art group, The Nest Collective, which represents African diversity of all kinds, selected Kawira Mwirichia for this unique honor, explaining that “Mwirichia’s kanga collection speaks to “those still in the shadows, whispering their love to each other. The project also hopes to spark self-love, pride, and well-being in our queer community here in Kenya as it reaches out to the world.” 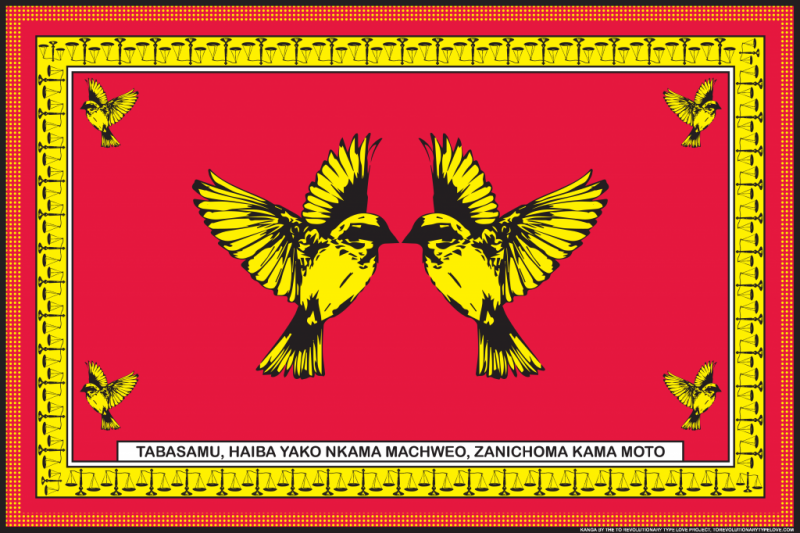 Mwirichia intends to complete kanga designs for all 196 countries of the world by the end of 2018 to mark the anniversary of #TRTL 2017.

She also hopes to register “To Revolutionary Type Love” as an NGO, to launch an annual pride celebration, and “create a platform to invest in and showcase queer culture in Kenya.” Supported by AFRA Kenya along with the Astraea Lesbian Foundation for Justice Global Arts Fund, the Heinrich Böll Stiftung East & Horn of Africa and the Goethe-Institut Nairobi, Mwirichia sees this work as “essentially an act of love” that has the potential to reverberate around the world.

In addition to the 35 kanga, “To Revolutionary Type Love” featured the works of six queer Kenyan photographers and a unique exhibition soundscape created by collaborating DJ's. Mwirichia says:

I don’t think Kenyans are hateful. … I think they are influenced by hateful people. We need to open up a space to talk more about sex, and then artists like me want to open that up even more, to talk about queerness.