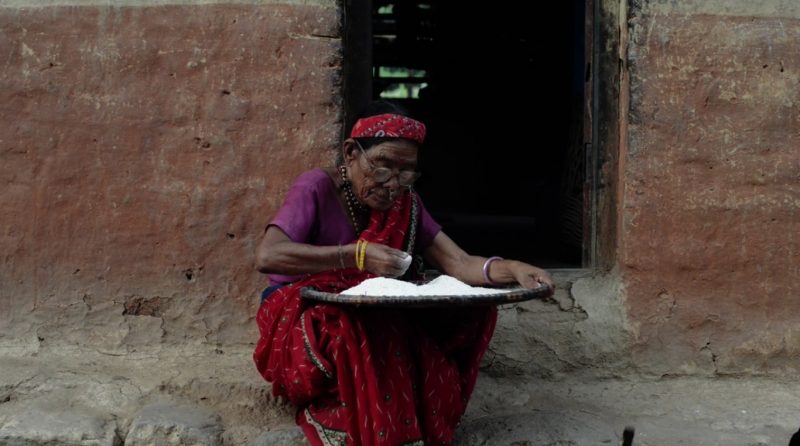 Gyani Maiya Sen is one of the two fluent Kusunda language speakers. Screenshot from a video by Felix Gaedtke.

A newly launched book-cum dictionary of the Kusunda language, one of several endangered languages in Nepal, is helping prevent the language from dying out with a whimper. The origins of the isolated language, which bears no obvious relation to any other spoken language in the world, continues to be a source of bafflement to linguists.

Gyani Maiya Sen is one of the two fluent Kusunda language speakers. Screenshot from a video by Felix Gaedtke.cZv”>https://t.co/OFcXajCcZv pic.twitter.com/g6mt1fOejq

It took five years of effort to compile the Kusunda dictionary

Though the 2011 Census shows the population of Kusunda people in Nepal as 273 and indicates 28 people speaking the Kusunda language as their mother tongue, field studies suggest there are actually only 150 Kusundas of which only two people are fluent speakers of the language.

Kusunda language is an oral language without any script and there are no written records, documents or books available. The living Kusundas dispersed to different parts of the country and they do not get the opportunity to speak in their mother tongue. They had to assimilate in ways of life and cultural practices of the places where they live now. As a result, the Kusundas do not even speak their mother tongue at home.

According to Uday Raj Aale, the author of the book, the only two fluent speakers alive are Gyani Maiya Sen Kusunda, 81, from Deukhuri, Dang and Kamala Sen Khatri, 48, from Rolpa. Currently, Kusundas live in the Kapilvastu, Arghakhanchi, Pyuthan, Rolpa, Dang, and Surkhet districts of Nepal. 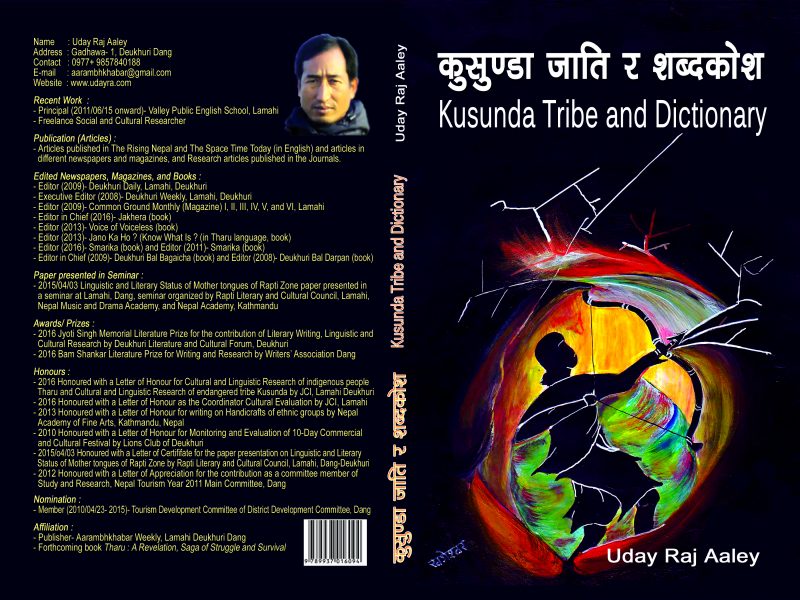 Jacket of the book on Kusundas. Used with permission.

The Kusundas, known as Ban Raja (kings of the forest), led a nomadic hunter-gatherer lifestyle in the hill forests of Nepal’s central and mid-western development regions until only few decades ago. Their lifestyle, patterns of habitation, and the distinct and unique Kusunda language suggest that they have been living in Nepal since ancient times.

The Kusundas also refer to themselves as ‘kings of the forest’, albeit in the Kusunda language, rendered Gilangdei Myahak and claim equal status and relationship to the Thakuris, the ruling clan in Nepal. According to the Kusundas, the Thakuris are kings of cultivated land, while they have dominion over wooded lands. Kusundas have typically taken Thakuri surnames such as Shahi, Sen, and Khan.

The book by Aaley talks about the history, language, culture, and tradition of the Kusundas and has a collection of more than 2,500 words from the Kusunda language. However, Aaley is not the only person studying the Kusundas. Brian Houghton Hodgson, Johan Reinhard, David Watters, B.K. Rana and Madhav Prasad Pokharel are among the other academics that have worked to shed light on the mysterious language.

This video made by Felix Gaedtke and Gayatri Parameswaran features interviews with Gyani Maiya Sen, her son and Professor Pokharel from Tribhuvan University’s Central Department of Linguistics.

This year’s local elections brought some good news for Kusundas. Dhan Bahadur Kusunda, founder of the Nepal Kusunda Development Society, was selected as a representative for the executive committee for the municipality of Ghorahi, Nepal’s seventh largest city, under the marginalized community category quota.

While the Kusunda language is still effectively facing extinction, the representation of Kusundas in local government and efforts like the compiling of the Kusunda dictionary will help to preserve the Kusunda culture and tradition as well as the language itself.