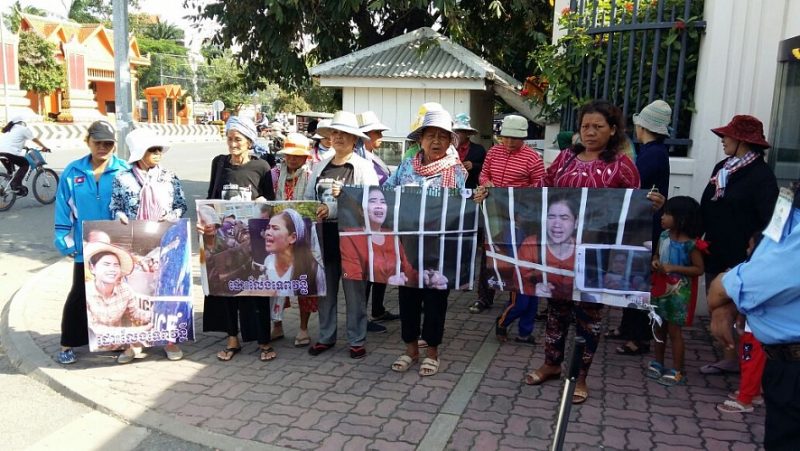 Tep Vanny's supporters calling for her release. Photo from LICADHO, a human rights group in Cambodia.

At least 65 civil society organizations (CSOs) and non-government organizations (NGOs) from across the world have already signed a unity statement urging the Cambodian government to release land rights activist Tep Vanny, who has been in detention for the past 12 months.

Tep Vanny is a prominent human rights activist who has been campaigning on behalf of marginalized farmers and displaced small landholders in Cambodia. She was arrested last August 2016 for leading the ‘Black Monday’ protest which was organized to call for the release of five human rights defenders accused of interfering in a government case involving an opposition leader.

The court convicted Tep Vanny of “insulting a public official” and sentenced her to six days in prison. But during her detention, the government revived a 2013 case against her when she led a protest in front of the prime minister’s house over the eviction of Boeung Kak Lake residents. A government reclamation project in Boeung Kak Lake, located in the capital city of Phnom Penh, has displaced thousands of residents living around the area.

On February 23, 2017, Tep Vanny was found guilty of committing “intentional violence with aggravating circumstances” during the 2013 protest, and she received a prison sentence of two years and six months.

On August 8, 2017, the court affirmed the decision to convict Tep Vanny. It was also reported that Tep Vanny could face a third trial for another revived case related to a 2011 protest in a Boeung Kak Lake community.

“Even though I am in jail, I am handcuffed and I am wearing prison uniform, the reality is that I am forever innocent.” #FreeTepVanny https://t.co/PCXixwZSFR

Tep Vanny’s prolonged detention is seen by some activists as part of a government plan to silence the opposition and spread fear among the people in time for the 2018 general elections. Cambodia’s ruling party has been in power for the past three decades, but it lost a significant number of seats in the 2013 elections.

The joint statement signed by 65 CSOs and NGOs warned that Tep Vanny’s detention “contributes to creating an atmosphere of fear for human rights defenders throughout Cambodia.” It also emphasized that dissent and peaceful activism should not be criminalized:

The fabricated charges against Tep Vanny and her arbitrary detention are politically motivated attempts to silence and restrict her activism as a human rights defender. The trial itself did not meet international standards for a fair trial.

Aside from local human rights groups, activists and residents in Boeung Kak Lake have been petitioning the offices of UN agencies and various embassies in Cambodia to seek help in pressuring the Cambodian government to release Tep Vanny.

Cambodian social media users are also encouraged to replace their profile photos with icons of the campaign.