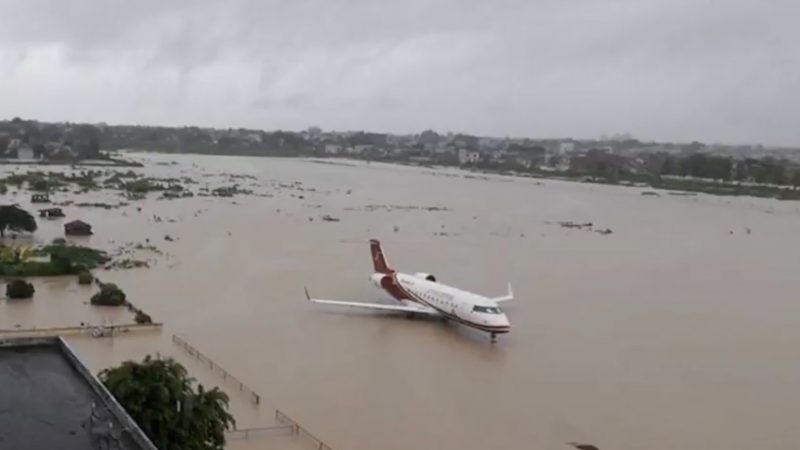 A series of terrible floods in Bangladesh, India and Nepal are disrupting lives of hundreds of thousands of people, displacing them and causing serious damage to property and infrastructure.

Heavy monsoon rain in southern Nepal and northern India caused flash floods and landslides, and the flood waters swept across downstream rivers in Bangladesh, killing at least 175 people in these three countries.

At least 6 million people were affected by the floods in Nepal's Terai region and more than 48,000 homes were submerged. A section of the Mahendra Highway, the most important east-west connection in Nepal, was washed away by torrential rains. Several villages and settlements were without help or relief as rescuers found it difficult to reach remote areas. The telecommunications and electricity services were down and connecting roads had been washed away.

People are sharing images and videos of the devastation on social media.

A man carries his cattle on his shoulder as he moves to safer ground in Saptari,Nepal,12 August 2017. #nepalflood #epaphotos pic.twitter.com/Cb6iOMOE3p

Father & son try to protect their goats after flood water gushed into their settlement in Sunsari, #Nepal (? by Madhav Ghimire) #NepalFlood pic.twitter.com/bOUqPjEnlh

Terai in trouble! Flood everywhere!small help can bring big change in their lives!lets help! @iamsrk u r the reason behind this unity! Thnx! pic.twitter.com/TSeo6H7BDu

Some are trying to crowdsource funds and relief goods to help the Nepal flood victims:

Meanwhile, In India, continuous rainfall triggered landslides in Uttarakhand and Himachal Pradesh and caused flooding in the eastern and northeastern states of Assam and parts of Bihar and West Bengal. At least 99 people died and over 2 million people were affected across 21 districts of the Indian state of Assam. At least 41 people died and 180,000 people were evacuated in the Indian state of Bihar after flooding in 10 districts. This is the third wave of flooding since the start of the 2017 monsoon.

Downstream in Bangladesh, water levels in most of the major river systems sharply rose, caused by the overflow of flood water from India and Nepal and some heavy monsoon rain. More than 1 million people had been affected by flooding after rivers burst their banks following days of heavy rain in Bangladesh. Experts predict that the country is headed for a major flood, similar to the one in 1988.

#Flood situation worsened in 20 districts in #Bangladesh. It might get even worse. https://t.co/UqngoQWHNo pic.twitter.com/0iF2nngAhx

This YouTube user posts a video showing the extent of floods in Dinajpur, a northern Bangladeshi district: