Paraguay's family farmers fight for their land and livelihood. 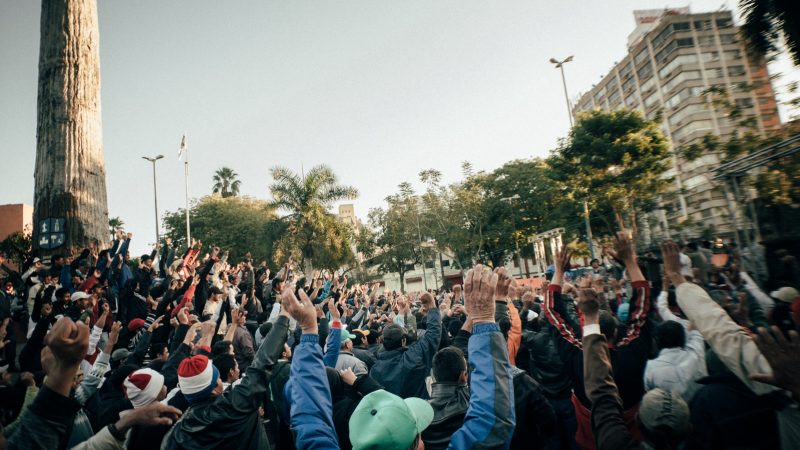 Photograph from the “En sus zapatos” (In their shoes) collection, taken from Kurtural's website. Photograph used with permission.

In Paraguay, thousands of farmers have been marching in the streets of Asunción since early July. As small producers, they decry the failure of the government to meet an agreement signed in April 2016, which promised the refinancing of agricultural debts of approximately 18,000 producers. A year later, labourers have returned to the streets claiming the agreement has failed.

In Paraguay, approximately 2.6 million people currently live in rural zones, accounting for over 30% of the total population. Residents struggle against rising levels of land concentration in the countryside as one of their biggest problems. Agricultural businesses use 94% of arable land which produces food for exportation, while family farmers only use 6% for family farming, according to Oxfam's report Yvy Jára: Los dueños de la Tierra en Paraguay (“Yvy Jára: The owners of the Land in Paraguay”).

The government's inadequate agricultural policies and a lack of information created by businesses linked to land concentration groups aggravate the situation:

The farmers have captured Paraguay's attention and solidarity is pouring in:

But some government members have referred to demonstrators as ‘cavemen‘ and the police have repressed the demonstrations:

#Urgent The police are getting ready to suppress: pic.twitter.com/l4tK0f8Afo

How did the Farmers’ March begin?

It is not the first time farmers have organized marches to fight for farmers’ rights. This year's marches are the result of an unfulfilled 2016 agreement signed by the government which aimed to solve labourers’ debts allegedly incurred from a series of state scams.

The farmers complained that the Ministry of Agriculture and Livestock distributed damaged seeds, promised technical assistance never arrived, and when selling their harvest, market prices were higher than expected. This made it impossible for many farmers to pay off their public and private debts.

In 2016, after nearly a month of demonstrations, President Horacio Cartes’ government reached an agreement with the farmers consisting of panel discussions to hear farmers’ complaints and the creation of new laws to support rural farming. During these talks, the government promised firm support of the farming sector.

Farmers now complain that the agreement has not been honoured and small producers from other sectors are in similar situations, strained by a lack of public policy, growing inequality in the countryside, and the absence of markets and government assistance in times of flood and frost.

In Paraguay, the state must promote rural farming as detailed in the national constitution. It expresses the need for agricultural reform consisting of ‘the effective incorporation of the farming population into the economic and social development of the nation.’ Moreover, it promises to commit to taking measures that ‘stimulate production, discourage land concentration and guarantee the development of small and medium-sized rural properties.’

Many farmers face losing their land and livelihoods to pay off their debts if they don't find a solution to this crisis soon, and fear they will become part of a growing poverty epidemic in Paraguay.

But farmers face more than just problems of debts and subsidies.

One farmer's statement shared by the group Ápe Paraguay on Facebook reveals many of the limitations of working on the land in Paraguay:

Local produce doesn't interest them because they can import everything. For example, these providers, who are millionaires, import peppers and tomatoes from overseas. They declare a few of them but sell like 20 thousand kilos every week. […] I produce roughly 3 thousand kilos and I can't sell it at the market. So they screw us over because they sell things from overseas and our own national production becomes worthless. The government should see this and help us. In our country, money is what matters, so smuggling isn't punished. I know this, because I once brought 5 thousand kilos of national produce and they detained me and kept me there for three days asking for papers [which spoiled] a lot of my produce; then another load came that was smuggled in and they paid two or three million [Paraguayan guaranies] and passed by. I had to wait there for three days because I supposedly didn't have documents. Imagine, bringing produce all the way from Concepción, the cost that represents…

Debt relief as a viable solution?

Farmers demand a ‘write-off’ of their debts under a financial rehabilitation law designed to protect vulnerable populations from abusive lending practices. The Ministry of Agriculture and Livestock is responsible for creating a list of potential beneficiaries who meet specific criteria. They must own less than 30 hectares of land and possess debts no higher than 51 million PYG (approximately 9,170 USD), the equivalence of 25 monthly minimum wages.

Only debts linked to agricultural activity will be recognized, limiting a significant number of potential beneficiaries. Debt-relief could affect at least 17,000 of the 196,000 small agricultural producers on the National Register for National Farming, the database used to determine beneficiary eligibility, though the exact number is unknown.

Paraguay took on Azucarera Iturbe's 15 billion PYG debt, considered by President Cartes to be ‘the biggest in the history of Paraguay.’ Complaints in newspapers lament the subsidy of Petropar's diesel fuel to soy producers has reached 140 million USD, a group who received economic support even before the beginning of democracy in 1992. Similarly, the Paraguayan government has subsidized new buses for public transport and continues to subsidize fares.

Parliament passed a decision to subsidize farmers on the 2nd of August, but President Cartes vetoed it two days later, dismissing the farmers’ demands. He justified the veto by saying the decision countered the appropriate application of the financial rehabilitation law. Cartes also argued that the cost of the subsidy ‘could be more than 3.2 billion USD, approximately 25% of Paraguay's budget.’ However, a careful look at the numbers behind Cartes’ statement proves the president wrong.