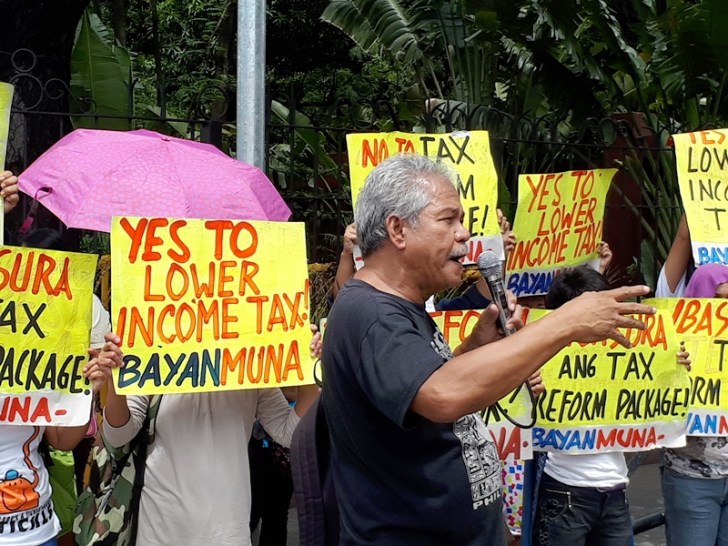 The Computer Professionals’ Union (CPU) has launched a website that aims to inform Filipino taxpayers about the additional expenses they will have to pay based on the proposed new taxes of the Philippine government.

While the government of President Rodrigo Duterte has touted the proposed tax reform measure as a boon to the poor, who would supposedly benefit from the changes in the income tax rates, various groups have opposed the measure for imposing higher taxes on essential consumer items that would affect the poor.

If approved, the reform will mean a ₱6 (US$0.12) per liter additional excise tax on petroleum products beginning January 2018. This will come on top of the 12 percent value-added tax already being collected from petroleum products. Sugar-sweetened beverages will have a ₱10 (US$0.2) per liter excise tax. Apartments, houses, and other properties rented out at ₱10,000 (US$200) a month and lower will also be levied taxes.

CPU’s Dagdag Gastos (Additional Expense) Calculator is a modification of the online tax calculator released by the Department of Finance early this year to popularize the government's tax reform measure. CPU explains their objective in launching the website:

We hope that with the Dagdag Gastos Calculator, more Filipinos will see that the promised relief offered by the tax reform is effectively narrowed down by DOF’s insistence on value-added tax (VAT) and excise taxes that impacts everyone regardless of income. Ultimately, more Filipino families will have to shoulder added expenses to their already gravely inadequate incomes.

But the similarity ends here. CPU's calculator also asks for one’s monthly expenses in terms of food, house rental, and utilities to calculate the additional household expenses resulting from the imposition of new taxes.

Additional expenses for the poor

Let's look at an example. If a poor head of household with four dependents in the Philippines earning a monthly income of ₱5,000 ($100) uses the Department of Finance tax calculator, their results will show that they are not affected by the tax reform package at all. They are not levied any income tax under the current tax scheme and will still not be burdened with any under the new scheme. 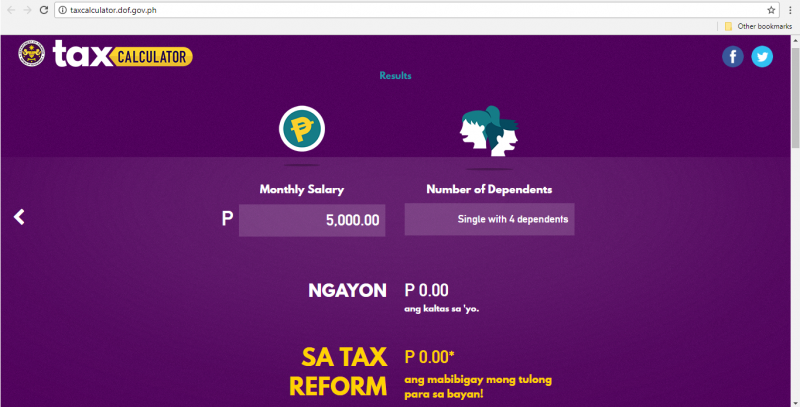 The Department of Finance tax calculator shows poor people — as defined by government think tank Philippine Institute for Development Studies (PIDS) — to be the least affected by the tax reform. According to the government institute, the poor are those who live on less than the official poverty threshold of ₱7,890 (US$157.8) per month or ₱263 (US$5.26) a day.

However, this doesn't take into account the added burden that additional taxes would impose on those living below the poverty line. According to the government’s 2015 Family Income and Expenditure Survey (FIES), families with an annual income of ₱60,000-99,999 (US$1,200-1,999) spends 58.8 percent of their income on food, 9.6 percent on house rental, 7.6 percent water, electricity, gas, and other fuels, and 3.9 percent on transportation. 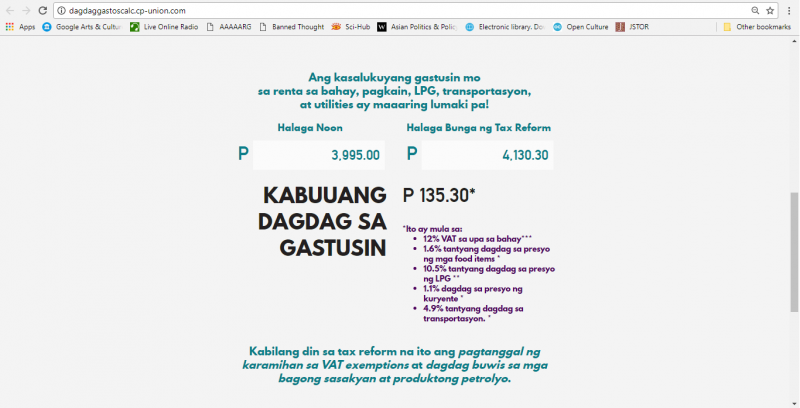 The tax reform also includes the removal of most VAT exemptions and additional taxes on new vehicles and petroleum products.

Taking with the right hand what is given with the left 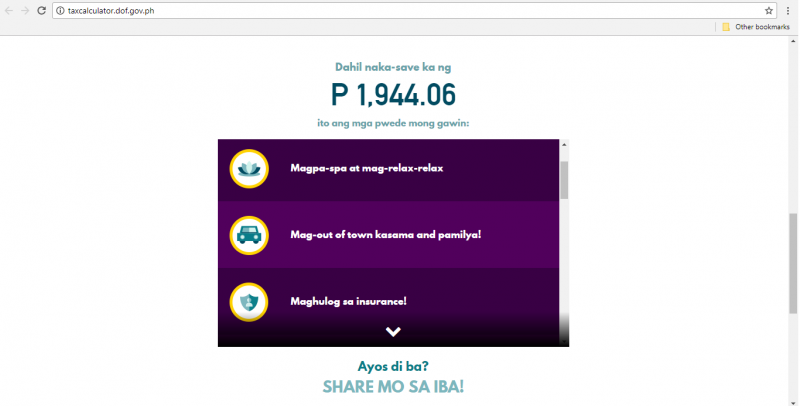 Go to the spa and relax!

Go out of town with friends and family!

Save for your insurance!

But like the previous examples, the Department of Finance tax calculator does not show the additional expenses entailed by the new taxes. According to the 2015 FIES, families with an annual income of over ₱250,000 (US$5,000) would spend 35.3 percent of their total income on food, 13.2 percent on house rental, 7.9 percent on water, electricity, gas, and other fuels, and 6.9 percent on transportation.

It thus becomes clear in this example that the tax reform takes with the right hand what is given with the left. As independent think-tank Ibon Foundation claims, it is the unemployed, underemployed, the poor, and middle classes who will bear the brunt of the new taxes, while big companies will continue to enjoy tax exemptions and other incentives.

What's behind the tax reforms

The tax reform measure was quickly approved by the pro-Duterte supermajority in the Congress’ lower house with a vote of 246 in favor, nine opposed, and one abstention, awaiting only further deliberation and approval in the upper house or Senate.

This tax legislation aims to generate revenues for Duterte’s “build, build, build” program that will create massive infrastructure projects in a bid to attract more foreign investors to the country. The DOF expects to get up to ₱600 billion (US$11.9 billion) from the tax reform measure by 2019.

As an alternative, critics like Ibon Foundation propose a more progressive tax system that bases collection on a citizen’s capacity to pay rather than an expansion of uniform tax coverage for all, which hits the poor the hardest.