On Anniversary of Nagasaki Bombing, Japanese Government Criticized For Refusing to Sign Ban on Nuclear Weapons 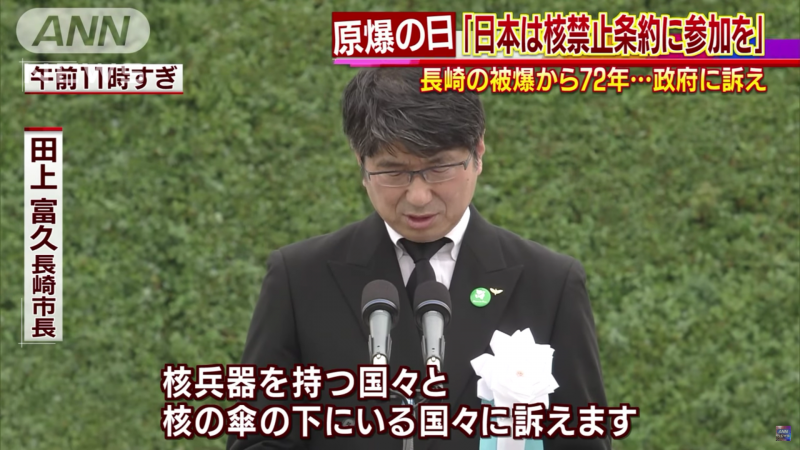 Caption: “On the anniversary of the bombing of Nagasaki, calls on Japan to sign the Treaty on the Prohibition of Nuclear Weapons—72 years since bombing, calls on government to act.” Subtitle: “We call on the countries that possess nuclear weapons and the countries under the nuclear umbrella (to sign the treaty banning nuclear weapons,” Nagasaki Mayor Taue Tomihisa. Screencap from ANN YouTube channel.

Last week the Japanese government was criticized at the annual memorial ceremony commemorating the August 9, 1945 atomic bombing of Nagasaki, while Prime Minister Abe Shinzo was later chastised by a survivor of the attack. On the seventy-second anniversary of the bombings of Hiroshima and Nagasaki, and as the United States and North Korea are threatening each other with nuclear attacks, the chief complaint in Nagasaki last week was that the Japanese government has refused to endorse the new Treaty on the Prohibition of Nuclear Weapons.

On August 9, 1945, an American B-29 bomber dropped an atomic bomb on Nagasaki, just north of the city center. At least 75,000 people died in the blast, and many more were injured.

To commemorate the bombings, each year on August 9 several thousand people, including foreign dignitaries, Japanese politicians like the prime minister and hibakusha–the dwindling number of survivors of the atomic  bombing–gather in the large “peace park” in Nagasaki located on a hill overlooking the epicenter of the bombing in the suburb of Urakami.

The ceremony is typically broadcast live on television. Hibakusha survivors are asked to speak, and politicians, including the Prime Minister of Japan, lay wreaths and make their own remarks on the bombing. The mayor of the city also leads the ceremony, and makes a speech, delivering Nagasaki's annual Peace Declaration.

This year, with Prime Minister Abe Shinzo sitting in attendance, the mayor of Nagasaki Taue Tomihisa used the 2017 Nagasaki Peace Declaration to directly criticize the Japanese government for essentially turning its back on the principle of nuclear disarmament:

Despite the fact that the Japanese government has clearly stated that it will exercise leadership in aiming for a world free of nuclear weapons, and play a role as a bridge between the nuclear-armed states and the non-nuclear-armed states, its stance of not even participating in the diplomatic negotiations for the Nuclear Prohibition Treaty is quite incomprehensible to those of us living in the cities that suffered atomic bombings.

While the English-language version of the 2017 Peace Declaration can be read here, Taue's statement is based on Japan's refusal to acknowledge the United Nations Treaty on the Prohibition of Nuclear Weapons. Signed in July 2017, the treaty has been described as the first legally binding treaty to abolish nuclear weapons. The treaty was endorsed by 122 UN-member countries, although countries that wield nuclear weapons, as well as many countries that either come under their protection or host weapons, such as Japan, boycotted the negotiations. 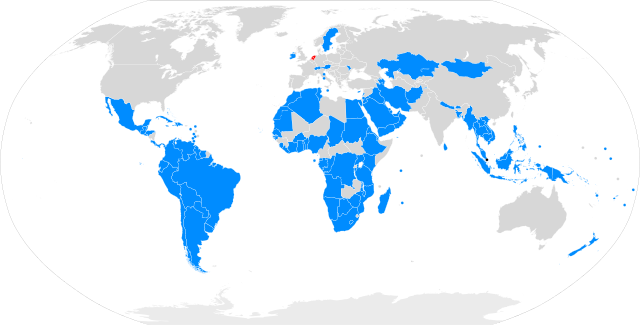 Vote on the final draft of the Treaty on the Prohibition of Nuclear Weapons, 7 July 2017. Blue = Yes, Red = No, Black = Abstain, Grey = Did Not Vote. Image by Wikipedia user NordNordWest. License: CC BY-SA 3.0 de.

The main criticism against the Treaty on the Prohibition of Nuclear Weapons is that it is unrealistic. Writing for the Bulletin of Atomic Scientists, Masako Toki, a research associate in the Nonproliferation Education Program at the James Martin Center for Nonproliferation Studies notes:

Opponents of the Nuclear Ban Treaty—including nuclear-armed states and allies under their extended nuclear deterrence—not only boycotted the negotiations (with the exception of the Netherlands) but also criticized the treaty for deepening the division between nuclear weapons states and non-nuclear weapons states. These nuclear-armed states—especially the United States, the United Kingdom, and France—indicated no willingness to join the treaty. In fact, in their joint statement they reiterated their position that they do not “intend to sign, ratify or ever become party to it.” They asserted that the Ban Treaty “clearly disregards the realities of the international security environment.”

While Nagasaki Mayor Taue Tomohisa was expressing his incomprehension that Japan, the only country to ever have suffered nuclear attacks, would ignore an international agreement that would formally work towards abolishing those weapons, Japan has still called for a stronger Nuclear Non-Proliferation Treaty to deal with what the country considers an emerging North Korean threat.

Besides the city's mayor, some attendees at the August 9 memorial ceremony in Nagasaki were also confused and even angered by the Abe government's refusal to sign the 2017 ban on nuclear weapons. In one exchange that went viral over social media, a hibakusha survivor of the bombings berated Prime Minister Abe in a face-to-face meeting, asking “Whose country are you leader of anyway?”:

“Whose country are you leader of anyway?” — representative of hibakusha group lashes out at Abe Shinzo

“Finally, our prayers are bearing fruit! The ban on nuclear weapons was passed!”

Although we are the sole country to ever have been attacked by nuclear weapons, listening to Abe in Hiroshima yesterday and in Nagasaki today, when he opened his mouth he was very skillful with his words:

That's enough to make anyone mad.

Others observed that Prime Minister Abe, in his remarks, did not really understand the significance of the annual memorial ceremony in Nagasaki:

Despite that, in his address to the Nagasaki memorial, Prime Minister Abe declared “we vow to create an everlasting peace without nuclear weapons.”

On television you could see the families (of the hibakusha) assembled together all tilting their heads in puzzlement.