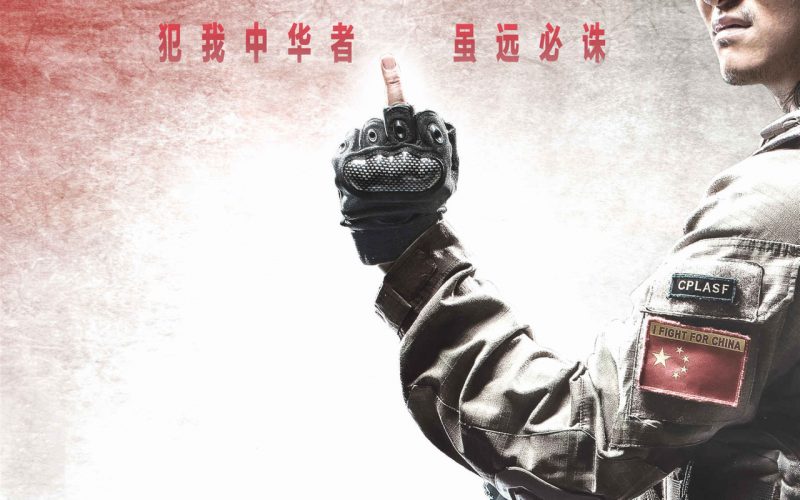 Widely circulated poster for “Wolf Warriors 2″ with the movie tagline: “Whoever offends China will be terminated no matter how far away they are.” Via Twitter

Chinese action movie “Wolf Warriors 2″ has dominated the summer box office, setting a country record with 3.5 billion yuan (approximately 525 million US dollars) in ticket sales in just 13 days since it opened on July 27.

Directed by and starring Wu Jing, the movie is a sequel to 2015's “Wolf Warriors.” It tells the story of Leng Feng, a Rambo-like soldier played by Wu, who ventures into an African war zone and saves hundreds of lives from Western bad guys.

The plot will feel familiar to anyone who has seen a Hollywood action movie, but this time it's a Chinese man upholding justice and keeping the world safe, a formula that has won the film praise — but also criticism. Numerous moviegoers have complained that the Chinese nationalism in the film is heavy-handed and comes at the expense of the story.

“Wolf Warriors 2″ was privately funded and has outperformed “The Founding of an Army,” the much-hyped state propaganda film about the establishment of the People's Liberation Army. A participant of a online roundtable hosted by in the investigative journalism platform, the Initium, argued that the movie’s huge success was not organic, but the result of authorities’ careful manipulation:

According to the film rating from [online ticketing platform] Maoyan, “Wolf Warriors 2″ is an OK movie. It's a blockbuster war movie that caters to popular tastes and more easily becomes a talking point. Moreover, the quality of domestic movies during the same period [it was released] is not high… In addition to that, this month in the domestic movie protection period [or the so called Hollywood movie blackout period – during the six to eight weeks foreign movies are barred from mainland theaters in order to open up more screen time for Chinese movies], so it is predictable that “Wolf Warriors 2″ would have high ticket sales. What was not anticipated is the military parade that took place [on July 30 to commemorate China's Army Day on August 1] just before the movie was released. The parade stirred up people’s nationalistic feelings. It is a huge government-funded advertisement for the movie, the box office surged like rocket. The box office record set by “Wolf Warriors 2″ is a reflection of a distorted Chinese film market. Nationalism advocated by the government has affected the movie industry, promotion from the film's production team and the entire film industry has further boosted the box office and created a legendary success, which is not a result of the market, but government administration…

In fact, a large number of government and army-affiliated media outlets have published positive reviews about the movie, claiming that the protagonist who appears unbeatable represents soldiers of the People’s Liberation Army and that the movie elevates Chinese nationalism to a new level. The tagline of the movie poster is “Whoever offends China will be terminated no matter how far away they are” (犯我中華者 雖遠必誅).

Netizen reviews of the movie vary. On Weibo and WeChat, social media platforms which are heavily censored in China and occupied by patriotic discourse, the majority of the comments are positive. For example, under one of the most popular film review threads on Weibo, the following two comments have more than 10,000 likes:

After watching “Wolf Warriors 2,” you feel very fortunate that you are born in China.

My god, the film is so good. My heart was burning while watching it. Wu Jing is so cool and you must watch it. This is a super film among domestic films.

While on Douban, a popular art consumption and rating website, there are also critical reviews alongside comments that praise the film:

Watched the premiere. This movie is horrible and unreasonable, a dream of idiotic patriotism. A display of military equipment, jeopardizing all physical logic. I have to say those who have the money can act recklessly.

Wu Jing’s [style of hyping] is awkward. The purpose is to push the main theme and trigger [nationalistic] feelings. It makes people feel that he is pretentious. The movie is not as good as “Operation Mekong” — first of all, the flow is not smooth, the story plot is poisonous and the script writing is embarrassing. Secondly, the orchestration with the main theme and the sensational presentation is outdated and excessive.

Leng Feng, played by Wu Jing, seems like Jackie Chen or Jason Statham. But in other films in the same genre, the protagonists represent the value of individualism. So copying the genre to serve the main theme [of nationalistic ideology] is problematic. We used to scorn individual heroism, but binding the all-powerful superhero with patriotism is more repulsive.

Chinese audience like [US-Australian war film] “Hacksaw Ridge” too. The movie shows how religious faith goes beyond politics. But a film that just aims to hail a regime is in a lower league. It is a product of [political reality] and opportunity.

People keep saying that Wu’s combat scenes are excellent. I found the staging artificial. Using a spring bed to catch a rocket-propelled grenade is absolutely a version of the Boxers [from the Boxer Uprising in China], who claimed they could block bullets with their bodies.

It's a movie that is absolutely correct in its politics, with illogical plot lines. It makes the audience feel a burning in their hearts and combines personal heroism and collectivism.

The movie is also showing in overseas markets and we can find more coherent, professional and uncensored film reviews from Western sources. This one from the site TL;DR reviews judged the film as such:

Wolf Warriors 2 brings Chinese propaganda films into the 21st century, however, it fails in presenting a solid story and in the production of many of its effects.

And it looked into how Africans are represented in the movie to prove that China is strong:

So what is the main theme of Wolf Warrior, well the film puts it as ‘China and Africa are friends’, a phrase that gets used so often that I wished I would have taken a tally of the times it was spoken. But it goes further than that, it feels more like China is Africa’s protector, and only hope for the future, and more so it is a film giving the middle finger to America and trying to capture a new future for China. Once again, there is nothing wrong with that, if you can also create an engaging film, but this is where it doesn’t work for Wolf Warrior… the film comes off less as an uplifting narrative of China in Africa, but more of a condescending critique. It treats its audience, as well as the people of Africa as children, it almost revels in the slaughter of civilians, Leng leaves people to be slaughtered because it is inconvenient to the plot, indeed when researching this review I struggled to find any of the African actor’s names.