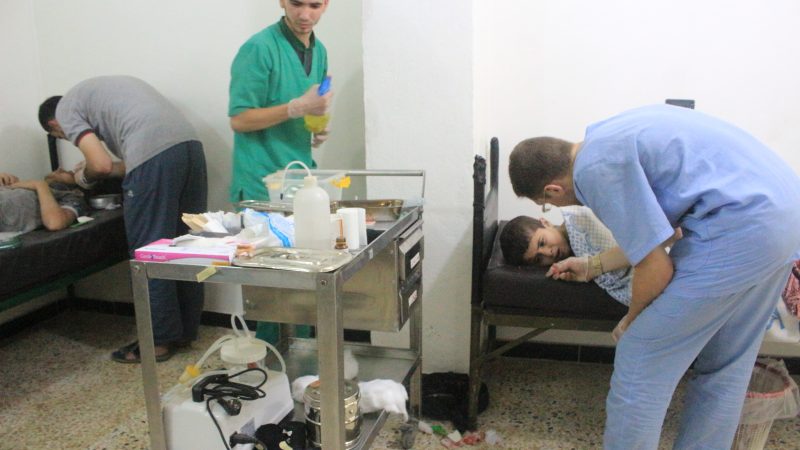 Two of the injured being treated at a hospital in Arbin. Photo taken by Qusay Noor. Used with permission.

Despite a truce, warplanes hit the Syrian town of Arbin, in the countryside of Damascus, on July 24, 2017, killing 11 civilians and wounding at least 30.

The city is a supporter of the revolution that began in Syria six years ago and remains outside of the control of Bashar al-Assad's forces and militant groups like ISIS. Located seven kilometers north-east of Damascus, Arbin is the first village of Eastern Ghouta, neighboring the Damascene neighborhood al-Qaboun on one side and the villages of Zamalka, Harasta, Madyara and Hamoriah on the other side.

According to the Syrian Observatory for Human Rights, the warplanes belonged to either the Assad regime or its ally Russia. A Russian military official, however, called reports of the airstrike “a complete lie”.

Global Voices spoke to Qusay Noor, a citizen journalist and photographer who is based in Arbin and who got in touch shortly after the bombing. He told us that the airstrikes initially hit the city not too long after sunset, around 7:30 pm, causing widespread panic, before hitting again at around 11:30 pm. Residents reported similar information to news agency AFP.

The following photos of the aftermath of the airstrikes were taken by Noor and used with permission. Global Voices received nearly 100 photos but refrained from publishing the most graphic ones as they are available on Noor's Twitter profile. The photos show the destruction inflicted on civilian infrastructure as well as the injured and the dead. An AFP correspondent who visited the town's hospital early on Tuesday saw at least five small bodies laid out on the floor, wrapped in white shrouds. Two of them were toddlers.

Citing the Arbin Local Council, Qasioun News Agency and Aldorar Alshamia Network also reported that one of the air raids was loaded with eight vacuum rockets. 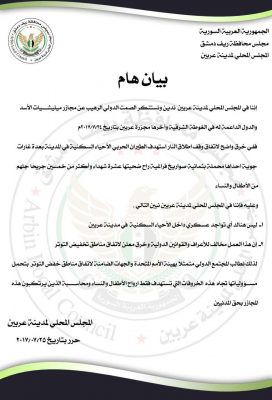 The attack was carried out after Russia announced a ceasefire deal on July 22 between Assad's government and the Local Council of Eastern Ghouta, which includes the Arbin Local Council (councils like these were set up in rebel-held areas to fill in the vacuum created by the government's absence). On July 23, 2017, the Ghouta region was described as being largely “calm” despite two reported violations by the regime.

In a statement, the Arbin Local Council said:

We condemn the terrible international silence regarding the massacres perpetrated by Assad's militias and the governments that support him in Eastern Ghouta, including the latest one on July 24th, 2017.

They also insisted on two points:

1- There is no military presence within the city of Arbin.

2- This act is in violation of international norms and laws, a breach of the ceasefire agreement

The Council also held a press conference on July 25, 2017 denouncing the “massacre” and calling on the international community to interfere as a guarantor of the ceasefire agreement, stating its responsibility to protect civilians.

It wouldn't be the first time that Assad's forces assaulted the town. Indeed, Arbin has been targeted repeatedly by the regime and its allies in the past six years, and has also endured human rights violations by rebel groups.

The “Creative Memory of the Syrian Revolution” project, among others, documented several of these actions committed by the regime against Arbin since 2011, and in particular bombings since 2012. Here are some of them:

According to the Center for the Documentation of Violations in Syria, an estimated 1,139 people from Arbin have been killed as of March 1, 2015.