Collage made from school textbook cover pages. From left to right: ‘With Christ through Life’ (Croatia), ‘Orthodox Catechism’ (Serbia), Ethics of Religions in Macedonian and Albanian (Macedonia), Getting to Know Religions (Macedonia).

Humanists and activists from former Yugoslav republics warn that the expansion of religious education in public schools threatens to undermine the secular character of their countries.

During the period of socialism (1945-1990) Yugoslavia enforced some limitations to the work of religious institutions, including the nationalization of lands owned by churches. However, since for the most part the officials of these churches and Islamic communities cooperated with communist authorities, the state tolerated and sometimes even supported the work of the religious sector. But religious education was confined to religious institutions, similar to the concept of Sunday School in the U.S.A.

During the period of transition towards democracy after 1990, the political influence of religious institutions became stronger. Most Balkan nationalist ideologies [1] considered having a particular religious identity as an essential element of cultivating a more solid kind of patriotism. This partly explains why surveys in post-communist states showed high levels of religious sentiment among the people.

Except for Slovenia, Albania and Montenegro, Balkan countries have introduced some sort of religious education in their school curriculum. This remains a subject of controversy and sometimes heated debates on social media in Serbia, Croatia, Macedonia and Bosnia and Herzegovina.

For starters, the term for religious education in Croatian, Serbian and Macedonian (“vjeronauk”, “veronauka” and “веронаука” respectively) is derived from combining the word “faith” (vjera or vera) with the word “nauk” or “nauka”, which in the past was applied to “learning”, but in contemporary language chiefly means “science”. Thus it can be translated literally as “religious science.” Critics claim this creates confusion in understanding the differences between religious teachings and the actual scientific disciplines such as physics or biology.

Why do they call it ‘religious science’ when it's not a science, but a subject about beliefs. So it needs to be called ‘religious beliefs.’

Croatia was the first former Yugoslav republic to introduce religious education in public schools during the 1990s. The classes promote the teachings of Roman Catholic Church, the majority religion in the country.

The subject is an elective, but without an alternative – the children whose parents decide to opt out of it usually have to wait out in the empty hallways or school library for the duration of the class. In some cases, due to peer pressure, children of atheists, Orthodox Christians or Muslims attend this class and various related religious activities like Christmas plays.

The Croatian NGO Center for Civil Courage [3] had been publicly demanding educational reforms related to this subject. The group explained why it thinks some aspects of religious education in public schools are not helpful to children. Below is the group's statement sent to Global Voices through email:

The biggest problem of such teachings is reflected in the expansion of hatred and intolerance toward others and toward those who are different – from the attitude toward homosexuals (they are likened to pedophiles), people of other nationalities, other religions, to the attitude towards unbelievers.

For example, in the textbook “With Christ through Life” for the 8th grade, young believers (about 86% of all primary school children) are taught that atheists are people brought up without God and therefore are willing to create something (horrific) like the Auschwitz (despite the fact that Auschwitz was conceptualized by those brought up with the idea that God exists), that atheists are absolutely unacceptable, that they are egoistic fools whose number should be gradually reduced through the imposition of Christian belief, the so-called “civilization of love”.

Auschwitz [4] was part of the network of concentration camps used by the Nazis and Fascists during World War II for the extermination of ‘undesired’ populations in Europe, such as Jews, Roma, Slavs, as well as political opponents, LGBT people and people with disabilities. Historical records show that most members of these regimes publicly claimed they belong to some religious communities, and at times even received open support from some priests.

The Center for Civil Courage has published segments of the textbook on their Facebook page [5], including English translations of the controversial claims. 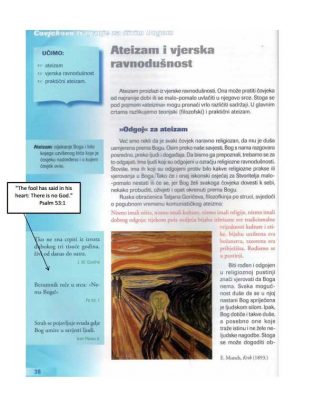 Lesson on atheism from Croatian textbook on religious education, illustrated with the painting “The Scream” [7] by Edvard Munch, with annotations by Center for Civil Courage. Click to enlarge. 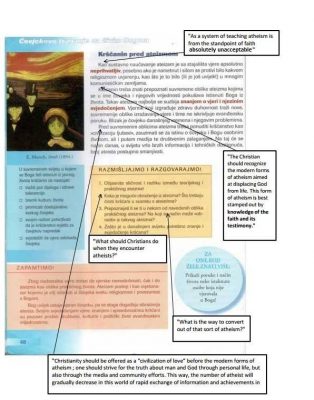 Second page of the lesson on atheism from Croatian Religious Education textbook, illustrated with the painting “Anxiety” [9] by Edvard Munch, with annotations by Center for Civil Courage. Click to enlarge.

The NGO has lodged an anti-discrimination complaint with the competent authorities, but only the Ombudsman for Children recognized the problem and reported it to the Ministry of Education and the Croatian Conference of Bishops three years ago. This didn't result in any reform of the textbook or the curriculum.

The new Minister of Education and Science of the Republic of Croatia, Blaženka Divjak [10], who assumed office in June 2017, stated in her latest interview [11] published August 2, 2017, the the issue of religious education is not part of the reforms [12] that the ministry will be implementing. She said it's up to the schools to review the teaching of this elective in a manner that won't negatively affect the students, as well as to “nurture an atmosphere of tolerance within the schools.”

The right-wing government that ruled Macedonia from 2006 till the spring of 2017 introduced the subject of religious education as an elective in public schools in 2008. It has two versions reflecting the teachings of the two biggest religious organizations in the country: Macedonian Orthodox Church and the Islamic Community. A subject named “Getting To Know Religions” was presented as a secular alternative.

Parents criticized the religious education class because it required the children to declare their religious identity, leading to traumatic experience for kids who found themselves in the minority among their peers.

In 2009, the Constitutional Court struck down the article enabling religious education from the Law on Primary Education for violating the secular character of the state. Authorities replaced it with a subject named “Ethics of Religions” supposedly as an objective introduction to the topic.

However, parents who read the textbook of “Ethics of Religions” discovered that it's the same textbook from the repudiated religious education class, promoting Orthodox Christianity and additional lessons on Islam and Judaism. Jovan Petrov noted [13] that instead of providing a comprehensive historical overview of religions, it promotes indoctrination ‘in a sheep's clothing.’

Using a PDF version of the textbook available online [14], Mr. Petrov identified segments of the text where even the name of the old subject has not been replaced.

Tweet: Just one piece of evidence – consider this screenshot… Is this hardline religious indoctrination of sixth graders or what? They even forgot to replace the word “religious education” with the name of the subject, BTW :)
Textbook text: “With the help of your religious education teacher select and read some segments from the book of Luke the Apostle: Works of the Holy Apostles. Find out how joyful and responsible the apostles were while spreading the evangelical truth about Christ. May such feelings wash over you every time you speak about God.
Image: Map of geographical region of Macedonia with a cross connecting some cities of historical and religious significance.

A word search of the PDF reveals that the textbook “Ethics of Religions” does not mention the existence of atheism at all, nor does it mention other religions with hundreds of millions of followers such as Hinduism or Buddhism, or any other religious practice or belief.

Meanwhile, the textbook [17] for the ‘alternative’ subject “Getting To Know Religions” is written with a more objective language, but has a similar focus on the three monotheistic faiths that have followers in Macedonia. It mentions the term “atheists” once, in the “Glossary of Less Known Terms” at the end of the book. It also has a section about magic as a precursor to religions, illustrated with a photo from a movie about Harry Potter.