Despite Pressure From China, Taiwan Finds Ways to Participate on the World Stage 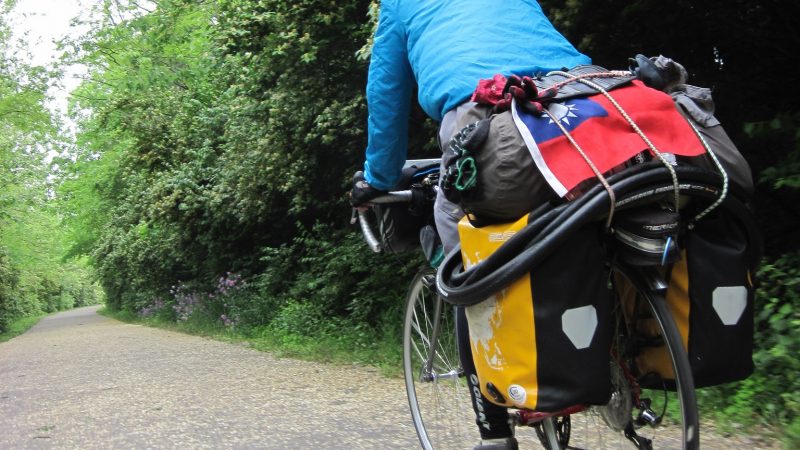 “Light Chang is visiting the US from Taiwan, proudly displaying the flag of Taiwan as he rides his loaded touring bike from coast to coast.” Photo and description credit: Mark Stosberg. Cropped. Originally shared under CC BY-NC-SA 2.0.

Taiwanese who wish to take part in international organizations face an enormous hurdle called the One-China Policy, which China uses to prevent their participation.

So what is it exactly? In short, the One-China Policy means there is only one state called “China”. But there are two countries in the world bearing that name, the People's Republic of China (PRC) and the Republic of China (ROC), so the international community must choose one over the other.

The government of the ROC, which is the official name for Taiwan, ruled the territories of mainland China from 1912 until 1949, when it lost the country's civil war to the communist PRC forces. Subsequently, the ROC relocated their capital to Taipei. They continued, however, to represent China in the United Nations until 1971, when the body forced them to give up their seat to the PRC (Resolution 2758).

Since then, the PRC has regularly leveraged its influence in the world to isolate Taiwanese based on the “One China Policy”.

Over the years, more and more Taiwanese prefer to have one China and one Taiwan instead of two Chinas or one united China. Nevertheless, the PRC is determined to have Taiwan in the near future, so they oppose any moves to formalize Taiwan's self-rule. Beijing even prefers that Taiwan use the name Republic of China as they can then accuse any country who supports Taiwan's independence of interfering with the internal affairs of China.

The PRC has become a non-negligible superpower through its economic and military growth in the last decades, and the country has used its international influence to further put the squeeze on Taiwan. For example, Chinese physician Margaret Chan served as the director-general of the World Health Organization from 2006 to 2017. In 2010, she reaffirmed the Memorandum of Understanding between the WHO and the PRC, a document signed in 2005, which stated that the approval of Beijing is required for any involvement by Taiwan in the organization’s activities. Furthermore, she specifically requested their members to call Taiwan a province of China.

Perhaps it's not surprising, then, that the ROC's application to join the World Health Assembly, the ICAO, and INTERPOL in 2016/2017 were all rejected despite the support from the US and the EU. Moreover, Taiwanese journalists were expelled from the ICAO, and Taiwanese NGO representatives were told that Taiwanese are not allowed to join the World Health Assembly even with a valid observer pass.

“The 23 million people in Taiwan should not be absent”

Despite the tremendous pressure from China, Taiwanese keep finding ways to be involved in the international arena. Taiwan has participated in the Olympic Games since 1984, in Asia-Pacific Economic Cooperation since 1991, and in the World Trade Organization since 2002. And in 2016, the Association of Southeast Asian Nations held its first official dialogue with Taiwan on trade.

In the events listed above, Taiwan participates as a sport entity and an economic entity, since it isn't recognized as a state. Taiwanese hope that in the future they can also participate in other arenas as a health entity (in the WHO) and a cultural entity (in UNESCO).

In 2003, for example, because of the outbreak of severe acute respiratory syndrome (SARS) in China, Hong Kong, and Taiwan, several countries supported Taiwan’s application to participate in the World Health Assembly. In response, China’s diplomat Sha Zukang said during the debate there was no need, since China was taking care of the health issues in Taiwan.

The reality, however, was that during the outbreak, it was the United States’ Centers for Disease Control, not China, that dispatched its experts to Taiwan to connect WHO and Taiwanese officials. Yu-Chen Tsai attended the World Health Assembly in 2003 when he was the vice president for internal affairs in the International Federation of Medical Students. He wrote on his blog:

I have seen the efforts that the Taiwanese government and NGOs make to participate in the WHO. I sincerely hope that no matter what challenges WHO will face in the future, the 23 million people in Taiwan should not be absent.

After Margaret Chan was succeeded by Tedros Adhanom in 2017 as WHO director-general, there is hope among Taiwanese that the Memorandum of Understanding between WHO and the PRC can be reviewed.

“‘The world’ is the water in a fish tank, and we are all fish in this tank”

Taiwan is home to an impressive amount of cultural heritage. For example, in contrast to its size, Taiwan hosts one of the most important museums in the world: the National Palace Museum, which is sometimes referred to as “The Louvre of Chinese Art”. Taiwan’s indigenous culture also plays an important role in Polynesians’ history. And its written language preserves the traditional Chinese characters that the PRC has moved away from.

But Taiwan is not a member of UNESCO, and therefore cannot apply for its World Heritage or Intangible Cultural Heritage designations.

Taiwanese artists and researchers still find ways to work with the world. OISTAT, the International Organization of Scenographers, Theater Architects and Technicians, is an NGO sponsored by UNESCO, and it is one of the rare international organizations that has Taiwan as a full member. Moreover, OISTAT moved its headquarters to Taiwan from Netherlands in 2006.

And the international non-profit World Monuments Fund listed the Rukai tribe’s old settlement, Kucapungane, in Taiwan in their World Monument Watch in 2016.

In a forum reported by Taiwan indigenous TV, Hui-Chen Lin, a professor in the Department of Architecture and Cultural Heritage at Taipei National University of the Arts, said that no matter if Taiwan is a member of UNESCO, Taiwanese should preserve their culture heritage, and maybe someday it can be introduced to the world in a formal way:

Because we are not a member of the [UN], we should preserve this valuable heritage in Taiwan and prepare to make them world heritage someday.

Wan-Jung Wei, the general manager at OISTAT, shared on Facebook her views about Taiwan operating in the international space: