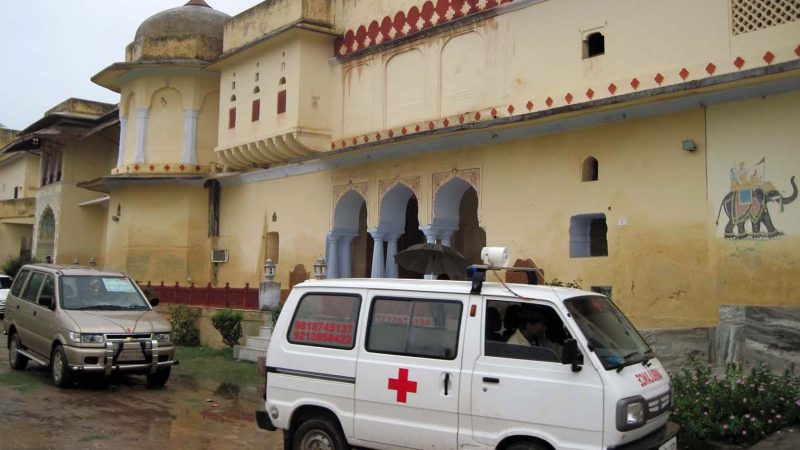 The ambulance availability in India is inadequate. Image from Flickr via user Jenny Mackness. CC BY-NC 2.0

This post was written by Alankrita Anand and originally appeared on Video Volunteers, an award-winning international community media organization based in India. An edited version is published below as part of a content-sharing agreement.

In India, there is tremendous shortfall in emergency medical services (EMS) in urban and rural areas. In rural and remote areas critical patients risk their lives due to the lack of affordable ambulance services. This article tells the story of how a video report by VideoVolunteers community correspondent Bikash Barman depicting the problem made it possible to produce an ambulance at a nearby health facility.

The delay in arrival at a public health facility, in seeking care and the delay in provision of adequate care has been identified as central causes of maternal mortality and need to be addressed to ensure that India meets Goal Three, Target 3.1 of the 2015 Sustainable Development Goals which seeks to “reduce the global maternal mortality rate to less than 70 per 100,000 live births by 2030.” While the World Health Organisation stipulates one ambulance for every 100,000 people in the plains and one ambulance per 70,000 people for more sparsely populated areas, a study conducted by the All India Institute of Medical Sciences (AIIMS) revealed that in New Delhi itself, there is one ambulance for every 144,736 people. Far from the national capital, the condition worsens in India’s rural areas.

In West Bengal, there are 788 ambulances against the ideal number of 913. A study in the Purulia district of West Bengal found that over 60% of pregnant women in the district died in healthcare facilities while 12% were declared dead on arrival, attributing this to the lack and inefficiency of government ambulance services. The lack of ambulance services in Kalpani village of Coochbehar district led to a high rate of home deliveries, which can pose a threat to the life of the mother and child in case of high-risk pregnancies. The village is surrounded by the Torsa river on three sides and boats do not ply in the monsoon. The village does not have a Primary Health Centre either and in the monsoon months, it becomes difficult to get to the nearest hospital, making it particularly difficult for women to access maternal health care.

A Video Made The Difference

On December 11, 2016, Minoti Karji, a resident of Kalpani went into labour. Repeated calls to 108, the ambulance helpline went unanswered and eventually, a private vehicle was hired for 700 rupees, a hefty sum for most residents of the village. According to a UNICEF study on maternal and perinatal death, the high cost of transportation often deters poorer families from accessing healthcare. In cases of emergency, precious time is wasted over deciding whether to spend on a private vehicle or not and the loss of time leads to deaths.

In Karji’s case, the family did manage to take her to the hospital in time but she was told that she still had over a month for her delivery and was discharged the next morning despite being in pain. Karji delivered her baby later that evening. Karji was furious that she still had to give birth at home, which is often risky, despite having spent out of her pocket to get to the hospital in the first place. She didn’t have the money to hire another private vehicle to go the hospital and so, gave birth at home.

After the incident, Bikash Barman took up the issue of maternal health care in the village and decided to first take up the issue of unavailability of ambulances through a video in December 2016.

For the next six months, the community with support from Bikash and White Ribbon Alliance (WRA), a non-profit that is working on addressing the issue of high rate of home births in Kalpani, pursued the case. The video became an important tool for reaching out to stakeholders across the board: it was first screened at a meeting of the gram panchayat (village governance) in the presence of the village headman. Soon, the village headman along with ASHA workers (community health workers) from Kalpani and WRA decided to take up the issue with local member of parliament (MP) Partha Pratim Roy, who asked the gram panchayat to file an application. The panchayat submitted the application in February itself. By March, the village got its own 24/7 ambulance and the service was finally inaugurated on June 2, 2017. Bikash says that buying and registering the vehicle took some time. Nonetheless, the availability of the service is a huge relief for the residents of Kalpani. Minoti Karji is visibly happy that maternal and child care is now within reach.

The story of Kalpani is an example of how a community with support from civil society and a willing state can ensure delivery of maternal health care services even to the most remote areas. While in the case of Kalpani, the state authorities did act; examples from other parts of the country show how communities and organizations have come up with alternatives in the absence of support from the state. In Bilaspur in Chhattisgarh, Jan Swasthya Sahyog (JSS) runs buses connecting villages to health centres at 40 paise (1 US Cent) per kilometre. A public-private partnership model is also being followed in some states; Deepak Foundation is in partnership with the government of Gujarat and provides ambulance services for pregnant women in Baroda. Alternative models range from practical to shocking. In Nandurbar district of Maharashtra, residents have put together the most rudimentary means of transport for those in need of healthcare: a bamboolance or a bamboo stretcher. While innovations of this kind are a boon in remote areas, they cannot replace essential public services. 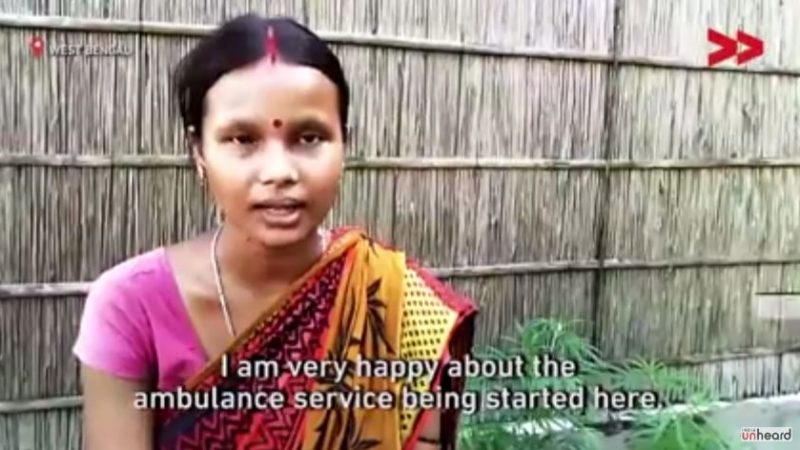 Minoti is relieved that Kalpani now has a dedicated ambulance service. Screenshot from YouTube Video

Moreover, the availability of ambulances is only one part of the problem. In the above video, Bikash reports that the village does not have a private health clinic and the river has no bridge to take the residents to the town either. Even when Karji did make it to the hospital in a private care, hers was a case of medical negligence. Despite the community health workers insisting that she was in labor, the doctor sent her away and asked: “Am I the doctor or you?” A clear breach of medical ethics is evident here, Bikash says that nothing can be done about the way doctors treat patients from poor and marginalized backgrounds.

According to the WHO, five women die every hour in India from childbirth complications and the majority of these deaths are preventable. The example of Kalpani is a success story at the outset but multiple aspects of maternal health care need to be taken care of. Under the government’s MMR reduction programme, the Janani Suraksha Yojna, ambulance services are to be made available to women in need within 30 minutes of their call. This is but the first step and a futile one if the hospital does not have the required facilities or is negligent of the patient’s needs.