Firing His Last Bolt — Jamaica's Superstar Sprinter Comes In Third To An Old, Unloved Rival In His Final Race 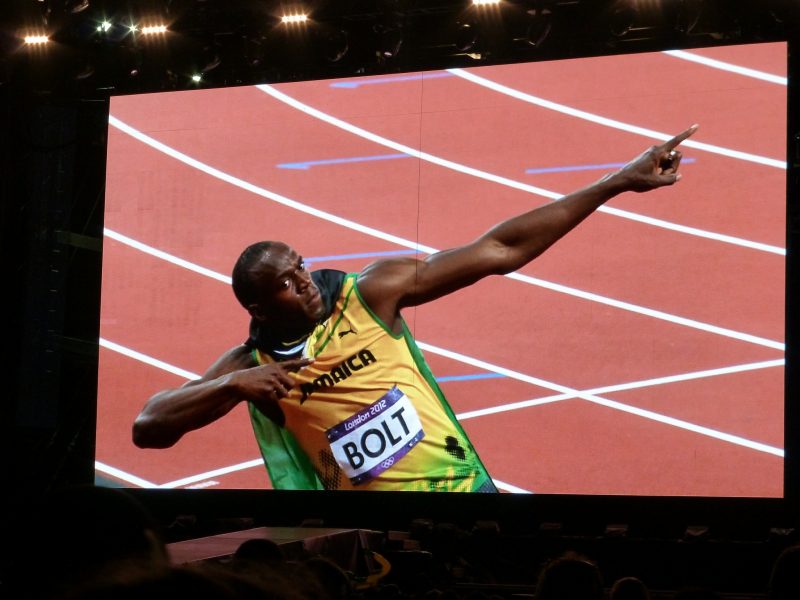 After the excitement of his final race on Jamaican soil at Kingston's National Stadium, Jamaicans at home and abroad were filled with nervous anticipation — and a sense of celebration — as their adored champion sprinter Usain Bolt entered the Olympic Stadium in Stratford, London on August 5, 2017, to compete in his final 100 meter race in the IAAF World Championships.

The result was not what many expected, and feelings were extremely mixed. Justin Gatlin pulled off a surprising win with a season's-best time of 9.92 seconds, and fellow US sprinter Christian Coleman clinched the silver medal, leaving Bolt with the bronze.

This race was preceded by several days of heightened expectations on Jamaica's always vibrant social media. Several leading Twitter users took off for London to show their support in person, and shared their excitement:

Jamaican supporters had their gear carefully laid out before going to the stadium:

While they enjoyed other athletes’ performances, Bolt's race remained the “main event” of the championships. Even Jamaica's prime minister, Andrew Holness, tweeted:

It's almost time to cheer on our home grown legend Usain Bolt as he runs his final race. We are forever proud!#OneLastBolt #TeamJamaica pic.twitter.com/77Xo1IDT7M

Fellow athlete Asafa Powell, who was the first athlete to break the sub-10 seconds barrier in a world record in 2005, tweeted encouragement:

On the eve of the finals, Bolt himself shared an inspiring tweet:

The Finale. Let's do this. #London2017 pic.twitter.com/9joLmLXrve

He also tweeted a photo of himself relaxing in his hotel room and watching another “GOAT” (Greatest Of All Time) on television — quite fitting, since the IAAF chief, Lord Coe, had likened Bolt to boxer Muhammad Ali in a recent BBC report:

Social media personality Ross Sheil followed up on the comparison, even in the face of the unexpected race result:

People compare Ali to Bolt a lot. Ali didn't win his last fight either. Doesn't diminish the legend of either CHAMP.

Emotions ran high as the result of the race sank in. Bolt placing third, behind upcoming young American sprinter Christian Coleman and Bolt's fierce rival over a number of years Justin Gatlin — the American who had failed drug tests not once, but twice — was a lot to for some fans to process. Gatlin is generally unpopular among Jamaicans, as much for his perceived arrogance as for his cheating. Bolt's erstwhile Jamaican training partner, Yohan Blake, ran a disappointing fourth.

Gatlin better gwaan home before them test him. #Stolen

I want this day to start over. I wanted a TOTAL fairy tale ending. ???

Others, reflecting on Bolt's admirable personal qualities, praised his humility and lack of macho posturing:

Usain St. Leo Bolt gives us one last lesson. Never in the face of one defeat lose sight of who you are. Like an elder statesman he remembers the crowd came to bid him goodbye and he shows his respects. No tantrums. No drama. Just take a bow and flash di pose -To Di Werl G.O.A.T!!!! Usain Bolt #champion #class #BigManTing

Our Bolt, gracious in defeat, embraces Gatlin. The fairy tale ending was not to be, but the Legend is secure.

Usain Bolt! A King is deposed but the Global Icon lives forever
I must confess that I had doubts […] I was hiding from seeing the race.
The first place I went to had tv so I left. Eventually I found a place with only a radio blaring some hardcore dancehall music. I felt safe. Secure from hearing the race.
Two guys I knew passed by. I said to them, ‘I am nervous, bout Bolt.’
‘Nervous? Bolt can't lose,’ one said.
At 3:45 the radio station switched into the race. No one in the world hides from Usain Bolt.
His bronze medal proves his humanity. He was, after all, not a machine, a cyborg or something made up in a lab.
He was just our own homegrown son of the soil who made it to the top in a manner that has never before been seen. It is highly unlikely that those of us living now will ever see the likes of him again.
He was, in the end, a human being just like us but, his exploits on the global stage made us feel so much better about ourselves. He took all of us to the stars! Him alone! Him one!
Thank you Dr. Usain Bolt. Your name is etched in the cosmos.

Some social media users didn't quite get the tone right. Jamaica's attorney general, Marlene Malahoo Forte, for instance, posted a tweet filled with quirky humour that not everyone appreciated:

As Jamaicans wrestled with their disappointment and a sense of anti-climax, radio broadcaster Dionne Jackson Miller tweeted:

There's nothing wrong with saying we're disappointed someone didn't medal. These aren't babies. They are world class athletes.

Although Bolt — as most athletics fans have come to expect — did not clinch the gold this time, the fact remains that he did win a medal. Some people attributed his final performance to the personal challenges Bolt faced this year — especially the death of one of his best friends, athlete Germaine Mason, in a motorcycle crash:

Sorry Mason,my Bolt really wanted to do it for u but he gave it everything he had on the day.He missed 3 wks of training crying & not eating

However strongly they felt, Jamaican fans were slightly shocked at one BBC headline, which read, “Drugs cheat Justin Gatlin beats Usain Bolt in the 100m. Is this a bad day for Athletics?” Still, some thought it hit the nail on the head:

The British Media including the @BBCSport, @DailyMailUK and @TelegraphNews going in on the two time American doping offender pic.twitter.com/cpsKq8KyQe

Bolt's sportsmanlike behaviour after Gatlin's win — when he immediately embraced Gatlin, then went on an extensive tour of the stadium, posing for dozens of selfies and hugging friends, family and fans — earned the Jamaicans icon great praise and admiration. Bolt's natural charm and friendly demeanour (minus the swaggering of some of his competitors) once again endeared him to all:

Nothing is yours forever. It is what it is. This doesn't diminish him. See how generously he greeted #Gatlin . @usainbolt a giant human ??

You never made me proud to be Jamaican, that was never in question, you made me glad to be alive. #USAINBOLT #London2017 #loveJamaica pic.twitter.com/g84XcXeAxM

Some of us should be guided by #USAINBOLT in how he reacted to Gatlin after the race. He hugged him & spoke with him. #Bolt teaches decency.

In an interesting postscript, award-winning sports blogger Zaheer Clarke shared a 2015 post, suggesting that Gatlin, even more than Bolt, had helped keep track athletics in the public eye, with the controversial comment:

The Greatest Of All Time

In the end, a more philosophical, grateful emotion prevailed as Jamaicans realised there will never be another Usain Bolt. Private sector leader William Mahfood shared a celebratory video, commenting simply:

Thank you @usainbolt for making history. Every step was incredible. #incredibolt. https://t.co/xMKahIpH09

Prime Minister Holness tweeted his thanks:

Thank you @usainbolt for a decade's worth of performances that kept the world on its toes. #Legend #OneLastBolt
??

Not to be outdone, Mrs. Holness added:

Benevolent in both victory and defeat.
Usain Bolt will forever be a legend, the World's greatest sprinter, ever! #OneLastBolt #ThankYou pic.twitter.com/KuC6e2MmVu

Ultimately, Bolt was easily forgiven for not winning gold with ease — something to which Jamaicans had become accustomed:

#Bolt tells Jamaicans "sorry about that". But, no, sir, nothing to sorry about. We can't thank you enough! You have nutten fi sorry bout!

It seems that the rest of the world agreed:

A world beater ☑️
An electric personality ☑️
One of a kind ☑️

Why there will never be another Usain Bolt https://t.co/wESGP1Jf8S pic.twitter.com/UjBfy2cEbI