"I want them to recognize that the Brazil of today exists because black people died..." 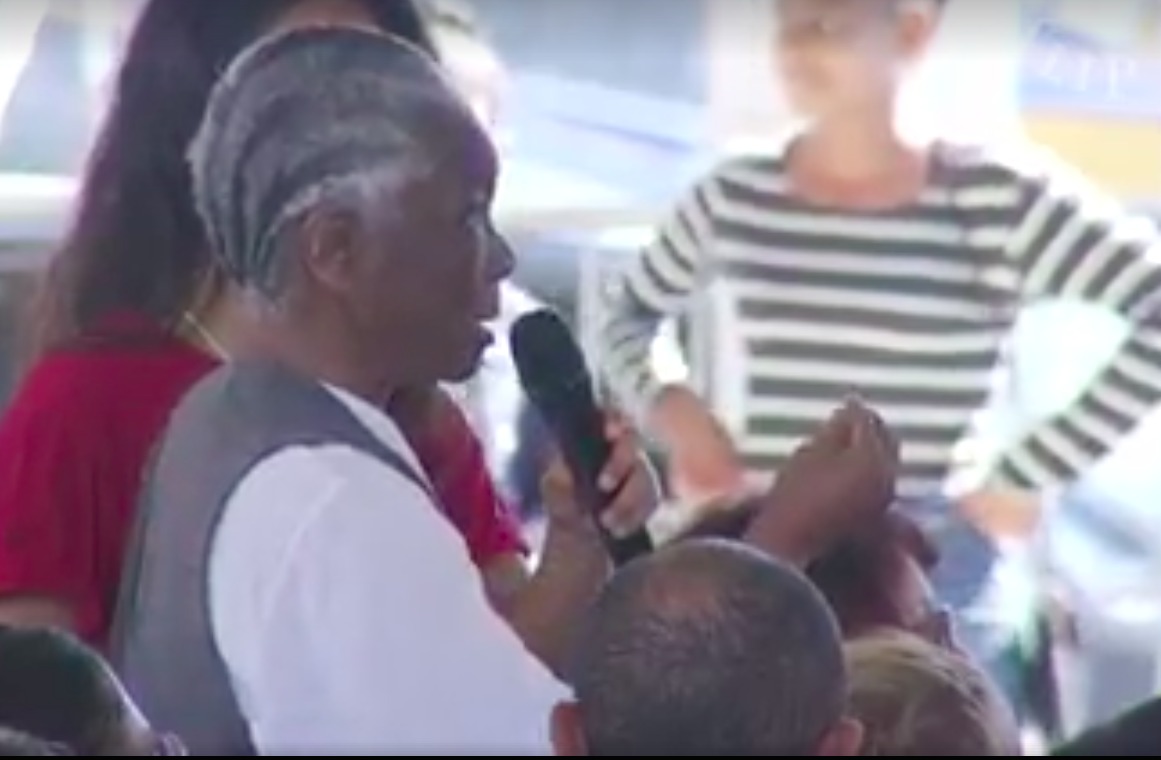 The account of the teacher on how it is to experience racism in Brazil went viral. Screenshot of video via Facebook.

Diva Guimarães was not a name known to Brazilians until 28 July. The 77-year-old retired teacher, who is black, became the star of the country’s largest literary event when, during a discussion on racism in Brazil, she rose from her chair to explain her own personal experiences.

After a few minutes, her emotional account — her voice was strong, but broke at times — got a standing ovation at the Literary Festival of Paraty (FLIP), which is held every two years in the city on Rio de Janeiro state’s coast. She said later:

Yesterday, I set myself free. I want to make it clear that I did not feel like a victim, I did not feel miserable at all, despite everything I’ve been through, and that when they thought they were hurting me, they helped me with the suffering to get to where I have.

Diva was born in the city of Serra Morena in Paraná state in southern Brazil. According to her, the place now has a little over 200 houses. A granddaughter of slaves, she said that her mother endured all types of humiliation to ensure that her children received an education. This was how Diva, still a child, came to the state capital Curitiba — a city where only 2.8% of the population identify as black — and then become a teacher.

During her talk, which went viral on social media, she said she was taken to a religious school at the age of five to study and work, and recalled the racism she encountered there:

I am going to tell a story that marked my life. I matured at the age of six. The nuns told the following story: Jesus created a river and told everybody to wash, to bathe themselves in the blessed water of that cursed river. The people who are white are so because they were hardworking, intelligent people and came to this river, bathed, became white. We, as blacks, are lazy – which is not true, because this country lives today because my ancestors provided for everybody – but then we, as lazy blacks, arrived at the end, when everybody had bathed and the river was only mud. So, we only have the palms of our hands and soles of our feet clear. Because we only managed to touch our hands and feet [to the water]. The nun explained this to tell the whites how we were lazy. This is not true, because otherwise, we would not have survived.

This year, Diva travelled to Paraty to meet Conceição Evaristo, a writer and activist in the black movement, who is someone of reference in Brazil. She told a TV outlet at the festival that she always dreamed of participating in the event, but was unable to as she uses her salary to support three other people. She ended up, though, coming in the very year that the person honoured was writer Lima Barreto, who was also the grandson of enslaved people.

In the same video, Diva explained what made her ask for the microphone to speak:

The teacher, who became a celebrity and was asked for selfies at the festival, asked today’s young black people to study and read to help undo the prejudiced myth that their people are “lazy”.

Soon after giving her account, which already has millions of views, she said experienced racism once more. The episode was recounted to the newspaper Folha de São Paulo, and it shows the prejudice that so marks Brazil, but which the country resists acknowledging: Diva was walking through the Literary Festival fair when she was approached by an angry salesperson, who harassed her to clean up the excrement of a dog a few metres away. Aside from her not being the dog’s owner, she was also not the only person in the area that he could have approached. Even so, the man chose her out of all those passing by. She remarked: “I know why”.

With over half the population identifying as black, Brazil denies racism

A survey by the Brazilian Institute of Geography and Statistics (IBGE) highlights that black people represent 53.6% of Brazil’s population today. However, they make up only 17.2% of the country’s richest 1%. In May at the UN Council of Human Rights, African and black-majority countries called for the Brazilian government to take measures to combat racism in the country. According to the BBC:

These nations asked for measures from the Brazilian government to reduce homicides of young black people, to guarantee freedom of religion, to improve access to quality education for the African-Brazilian population, to protect and guarantee the rights of black women and more access to policies of poverty reduction and access to social programs.

At the same discussion which made Diva famous shortly before she spoke, actor Lázaro Ramos also gave an account of how racism has a ripple effect on all Brazilian society. Brazil was the last country in the Western world to abolish slavery, doing so in 1888. “It is a central question what is happening today in Brazil with the black youth. Many people with potential are being assassinated”, he said before going to the reading of one of his texts:

Yes, we are racist. We believe and fight to not be. Yes, we are classist. Here, who studies more, that is, who had more opportunity, has the right to a special cell [in prison]. We like to celebrate and privilege the special. A bad cell for black and poor. Throw them there and take them out of our way.

Independent journalist group Mídia Ninja met with Diva in Paraty and asked, “What message would she give to today’s young black women?” Her response was: