‘The Turkmenator': Turkmenistan's President Plays Up His Gun and Knife Skills on State TV 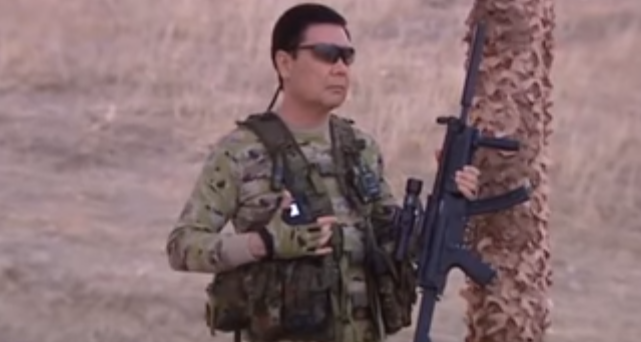 Turkmenistan's president is at it again.

Just few days after Global Voices highlighted Gurbanguly Berdimuhamedov's high-profile talents, which include singing and biking while his country falls into a deep financial crisis, a new video of the president started to circulate.

This time, Berdimuhamedov is dressed in fatigues and showcasing how well he can shoot guns and throw knives at military exercises, to the applause of his generals.

The scenes was first shown on Turkmenistan state TV. There is no free media at all in Turkmenistan, but the overseas Chronicles of Turkmenistan, an independent news outlet, was quick to download the state TV footage and re-edit it into a Hollywood-style action sequence:

The video went viral, grabbing the attention of world media and inspiring social media users to share funny captions. Berdimuhamedov, who is only the second president in the country's independent history, holds the official titles of “Leader of the Nation” and “Protector”, and now in light of the video Facebook users have bestowed upon him another: The Turkmenator (a play on the science-fiction franchise “Terminator”).

However, it also resulted in a very serious massive DDOS attack against Chronicles of Turkmenistan:

Our website (www.chrono-tm.org) is under a large-scale DDOS-attack. In connection with this, there are difficulties with accessing the website.

Probably, this is a kind of reaction of the Turkmen authorities to the video that was widely spread on social networks featuring President Gurbanguly Berdimuhamedov demonstrating his great skill shooting firearms and throwing knives.

The context in which the country finds itself isn't so funny, either. Turkmenistan, once named a “social paradise” for its range of services such as free gas and free electricity for its population, has recently endured a harsh financial crisis and as a consequence has had to stop providing many benefits to its people. The country has also drawn comparisons to North Korea for its heavy restriction of freedoms.