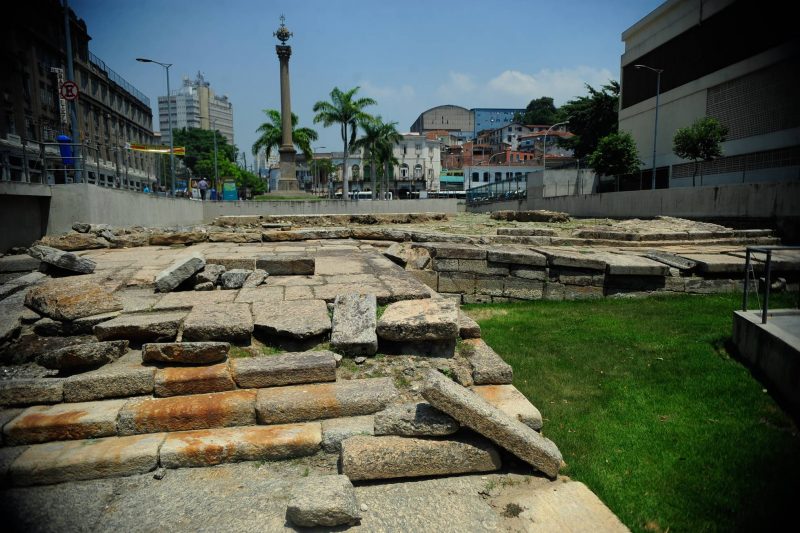 Cais do Valongo, the site that used to be the main slave trade port in the three Americas in the 1800s | Image: Tomaz Silva/Agência Brasil/CC BY-NC-SA 2.0

The remains of what was once the largest slave trade port in the Americas came to the surface in 2011 after almost 200 years buried, when construction work on Rio de Janeiro's port area began as part of the city's preparations ahead of the Olympic Games it would host five years later.

In July 2017, UNESCO certified the place as a World Heritage Site, with the purpose of turning the long-lost stones of Cais do Valongo into a memorial site.

The recognition from the United Nations’ educational, scientific and cultural arm forces Brazil to recognize a period of its history that the country still struggles to fully confront. Brazil was the last country in the Americas to abolish slavery, doing so in 1888. The slave trade, however, became illegal in 1843 and Valongo lost its purpose. According to the online historical database Slave Voyages:

Brazil was the center of the slave trade carried on under the Portuguese flag, both before and after Brazilian independence, in 1822, and Portugal was by far the largest of the national carriers. Brazil dominated the slave trade in the sense that Rio de Janeiro and Bahia sent out more more slaving voyages than any port in Europe […] Over nearly three centuries between 1560 and 1850, Brazil was consistently the largest destination for slaves in the Americas.

Valongo’s Quay was created in 1811 — three years after the arrival of Portugal's royal family, who were escaping Napoleon's army in Europe — and soon became the main destination for ships bringing enslaved people to the Americas. Historian Lilian Moritz Schwarcz, who is a scholar in São Paulo’s University and a Global Scholar Program participant at Princeton University in the US, explains that it was located only a few steps away from the royal palace and during their walks, the monarchs would often watch traders preparing “their products” — separating families and rubbing whale oil on the enslaved Africans’ bodies to cover any wounds:

Brazil received more than 4 million Africans, during the (almost) four centuries the country had a regime of enslavement. That number is equivalent to a little less than half of [all the Africans] who left their continent of origin, forcibly, and managed to arrive at the Americas alive, after a long journey full of adversities. From this absolute number, nearly 60% docked at Rio de Janeiro and about 1 million entered by Valongo’s Quay.

Which means that in 32 years of operation, Valongo not only became the most trafficked slave port, but also received a quarter of all enslaved Africans who ever entered Brazil throughout the centuries that the system endured. When Brazil's National Historical and Artistic Patrimony Institute (IPHAN) presented the site as a candidate to UNESCO, its then President Kátia Bogéa explained that Valongo was “the only [site] representing millions of African people who were enslaved and worked to build Brazil as a nation, creating the largest black people population outside of Africa”.

As Schwarcz puts it in her recent article about the heritage title, in Brazil’s case having this historical site recognized is more than a matter of memory. It’s about “closing the door on oblivion”:

It’s not about condemning these populations to their past, especially because no one was a slave by origin or birth. But it’s about remembering and elevating the Africa that lives in us. As Alberto da Costa e Silva, our greatest Africanist, beautifully defines: ‘Brazil is an extraordinarily Africanized country. And only someone who doesn’t know Africa can escape how much of it there is in our gestures, in how we live and be, in our esthetic sense. [….] With or without remorse, slavery is the longest and most important process in our history.