Even the Best Dancer Leaves the Dance Floor: African Strongmen and Political Transition 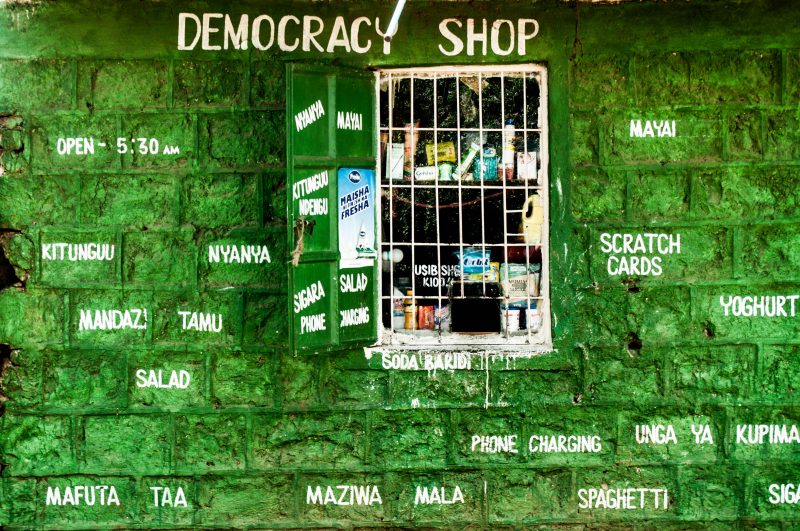 Today, August 4, Rwanda goes to the polls to elect their next president. There are four candidates contesting the election—including the incumbent, Paul Kagame—but there is little doubt who will triumph. As a recent article in The Economist put it, “on August 4th Rwandans will re-elect Mr Kagame. The outcome is not in doubt. He has always won more than 90% of the vote in the past.”

If—or rather, when—Kagame wins the election, he will enter his twenty-third year as the de facto leader of Rwanda. He first took power in 1994 as vice president and defence minister—at the time, essentially the leader of the country—then became president in 2000. In 2015, he presided over a referendum that amended Rwanda’s constitution to allow him to run for a third term in office and potentially serve for another seven years. The process could see him in power until 2034.

The African political landscape is, of course, dotted with leaders whose rule stretches well over two decades. Many of these strongmen are democratically elected, if only in theory, but hold on to power with an autocratic grip. A good many of them are 70 or older on a continent where, according to UN data, the average age of the population is 19.5 years. Few of them are favourably regarded outside of their countries. Kagame is a notable exception. 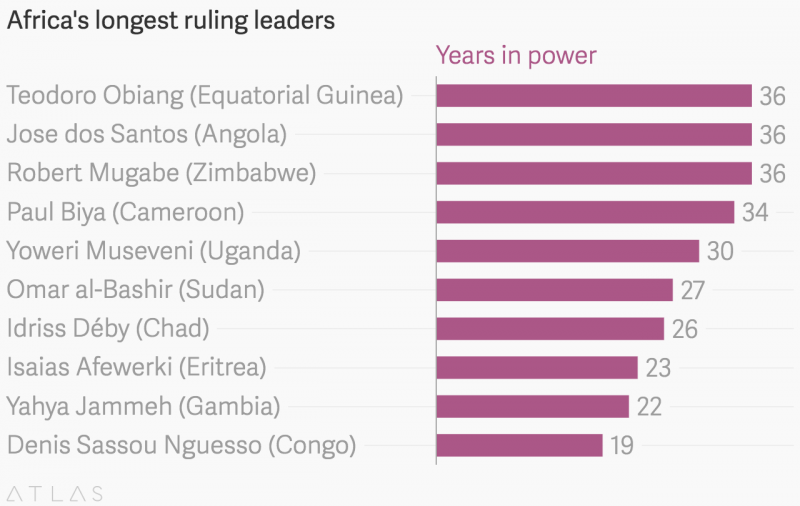 Kagame has long been a favourite of the international donor community and of what The Economist refers to as “the Davos crowd,” the elite group of global business leaders, politicians and economists who meet annually at the World Economic Forum.

Kagame’s achievements as a leader are indeed considerable. He came to power in Rwanda after a genocide in which over 800,000 Tutsis and moderate Hutus were killed in the most horrific ways at the hands of the extremist Hutu regime. About one-third of Rwanda's ethnic minority, the indigenous Twa, were also wiped out.

Kagame managed to transform a country ravaged by civil war into one with an impressive record in development and fighting corruption. Rwanda is one of the few countries with a female-majority parliament—64 percent, the highest in the world. Its annual GDP growth averaged 8% between 2001-2015. Rwanda’s citizens have access to basic healthcare and cabinet ministers are held accountable for their performance.

But evidence suggests that the stability and level of development the country currently enjoys have come at a cost, and that Rwanda is a police state where dissenters, both at home and abroad, are silenced, imprisoned or killed. In their 2015 report, Freedom House alleged that Kagame's government is actively engaged in suppressing formal political opposition. According to The Economist, “speech is less free in Rwanda than in any other African country, except Eritrea.” As one of Kagame’s former economic advisers expressed it: “For Western governments, financiers and opinion leaders, Rwandan president Paul Kagame offers a Faustian bargain: Overlook my brutal behavior, and I will offer you a model for economic growth in an African nation.” 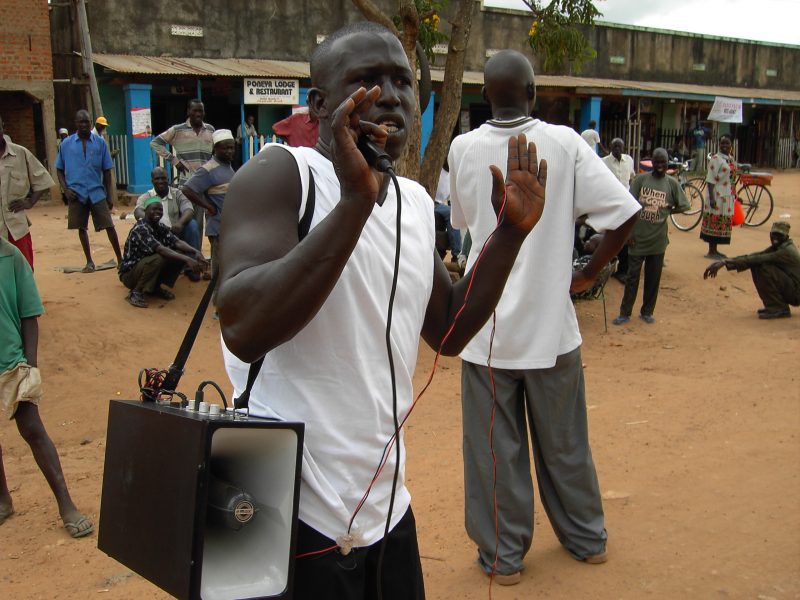 Election campaigns are not only about presidents. They are also fought by people on the ground. Adjumani in Uganda in 2006. Photo By Pernille Bærendtsen.

Yet there are those who argue that the suppression of certain freedoms is reasonable and justified given Rwanda’s history, and that “service delivery” is what matters. Or as the headline of a Global Voices piece about the 2015 referendum put it, “Is It Not Democracy If Voters in Rwanda Want a “Life President?”

The Kenyan academic Wandia Njoya, for instance, slammed the Economist article on Twitter , calling it “immoral and wrong on so many levels.” The conversation sparked by Njoya’s comment went down a familiar path, with criticism of the Rwandan leader being conflated with minimising the 1994 genocide. (Making false claims about the 1994 genocide is, not unreasonably, a criminal offence in Rwanda). The country maintains a well-oiled and sophisticated public relations machine that portrays any criticism as being anti-progress, and promotes the idea that without Kagame at the helm, Rwanda will descend once again into chaos.

The fear of challenging leaders who cling to power is, for some Africans, rooted in anxiety and fear about unknown alternatives—alternatives which, as in Rwanda, where genuine political opposition has been all but suppressed, remain weak and unknown because they are never allowed to emerge and develop.

In 2015 Nigerians elected former military leader Muhammadu Buhari as president. Buhari was the country’s head of state from December 1983 to August 1985, after taking power in a military coup d’etat.

Buhari was elected on the platform of being a strong leader capable of stopping the extremist terrorist group Boko Haram. He was also considered to have both the integrity and “austere and Spartan life style” essential for fighting corruption, and to his credit, he did significantly halt Boko Haram's murderous rampage.

But the 74-year-old Buhari has shown himself to be out of touch with the current realities of statecraft. His economic policies in the face of dwindling international oil prices have been disastrous. As one Nigerian columnist put it, three decades after first taking power, “Buhari in his second coming appeared to have planted his governance principles on the template of his first. If those principles failed the nation woefully in 1984, they are even far less likely to work in today’s much-changed world.”

One example of this is the Buhari administration's bid to save the Naira, Nigeria’s national currency, from devaluation by “chopping down trees lining the streets of its capital to thwart black market money changers” and banning a long list of consumer goods “from shovels and rice to toothpicks.”

Buhari's health has also been a matter of public speculation. In early 2017, he spent two months in London being treated for an undisclosed illness and had a further round of treatment in May.

Nigerians elected a frail strongman as president, and appear to believe their country is best led by the firm hand of an ex-general or someone closely linked to the military—a sign that the effects of over 30 years of military rule are deeply entrenched.

The firm hand of an army general has been the reality in Uganda's for the past 31 years. In power since 1986, Yoweri Museveni was re-elected for a fifth term in 2016, in an election that many observers declared not free or fair. Museveni's government has tormented his top challengers with physical attacks, house arrests and the levelling of trumped-up charges of crimes such as terrorism, rape and treason. He is rumoured to be preparing to put forward another crucial constitutional provision that would extend his rule even further.

Since 2015, the right of Ugandans to protest and hold public rallies has been eroded by the passing of the Public Order Management Act (POMA) by a parliament dominated by the ruling party. The law gives the Inspector General of Police—a close Museveni ally—the power to permit or disallow public gatherings, a huge obstacle to political organising. Political patronage and corruption have also rendered the government incapable of delivering basic health services and jobs. In Transparency International's 2016 Corruption Perception Index Uganda was ranked 151 out of 176 countries in the world, dropping 12 places from its 2015 position.

In 2005, Ugandan parliamentarians were allegedly bribed to repeal an article of the constitution that limited the country's leader to a two presidential terms, but if Museveni is to be eligible to stand for re-election in 2021 he also has to remove an age limit clause that prevents a person older than 75 from running for the country's highest office. His government has made considerable strides on the economic and political stability fronts, but with a population of 37 million and state machinery that belongs back in the 20th century, Museveni is failing to meet the expectations of a young population where more than 70 percent are below the age of 30. When Museveni finally leaves office, Ugandans will be understandably anxious about whether they will witness the first peaceful transfer of power since the country gained independence in 1962.

This apparent unease with political transitions is also present in Tanzania, where one political party, the Chama Cha Mapinduzi (CCM), has dominated politics since independence in 1961, albeit under different leaders—including the country's founding father Julius Nyerere, who set a precedent by stepping down voluntarily in 1985.

In October 2015 the East African nation re-elected the CCM with a new leader, John Magufuli, at the helm. The election was the most competitive in the history of Tanzania and the opposition received more votes than in the previous election, but the CCM won both the presidency and a majority in parliament. In a survey by the Tanzanian NGO Twaweza in September 2016, 96% of the Tanzanians surveyed expressed approval for the Magufuli. Another 2016 Twaweza survey indicated that voters were also supportive of a one-party dominant system, with 80% of respondents agreeing that the opposition “should accept defeat and help the government to develop the country.”

All this despite evidence that the Tanzanian government under Magufuli's leadership is taking an increasingly authoritarian turn. The government passed legislation in 2015 that critics say will restrict press freedom. And in June 2016, the opposition politicians were banned from holding meetings outside of their constituencies. A 2017 poll by Twazeza showed that while Magufuli’s popularity rating had dropped since the previous year, seven out of ten Tanzanians, or 71% of the population, still approved of the president.

Even in Kenya, where the stranglehold that the dominant Kenya African National Union (KANU) party had on politics from 1969 was finally broken in 2002, multi-party politics has proven to be a fragile thing. The general election set for August 8 is predicted to be the most hotly contested in the history of that East African nation. A defeat for the incumbent president and his Jubilee party candidate, Uhuru Kenyatta, would give him the embarrassing distinction of being the first Kenyan president not to be re-elected. With the recent killing of a senior election official, there are worries about Kenya's stability and reminders of work needed to not repeat the violent election season of 2007-2008.

What do citizens want from their leaders?

Popular support for authoritarian leaders and an apparent preference for a kind of “democratic autocracy” prompts questions and assumptions about exactly what citizens of some African nations want from their presidents and political parties.

In the case of Tanzania, while polls suggest that a large portion of the population currently prefers stability and continuity over democracy, for how long will Tanzanians tolerate the increasing authoritarianism? And in Rwanda, one wonders how long  Kagame’s policies will continue to be effective in containing dissent.

These examples point to the limits of electoral politics and political solutions. But part of the answer certainly lies in developing confident and politically informed electorates, and in building and nurturing strong and credible opposition parties and civil society groups. Neither of these is a simple task, as in many countries there are powerful forces working against their success. But even the best dancer leaves the dance floor, and it's important to prepare for the moment they do. 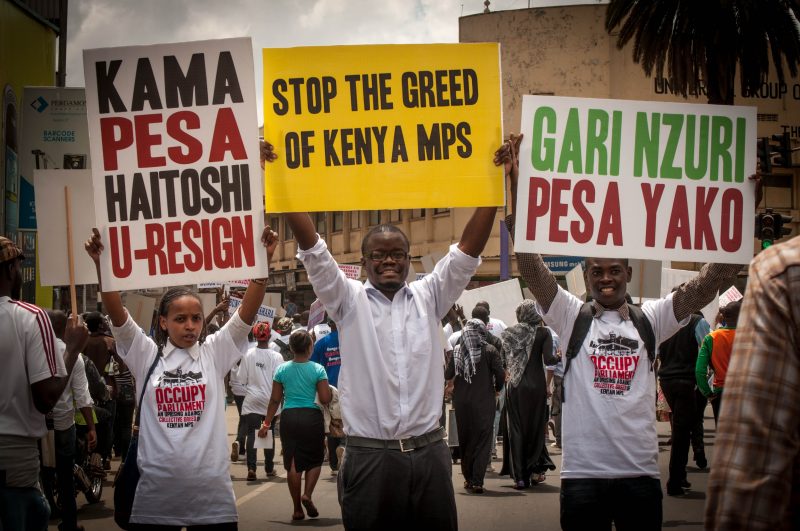 In Kenya, young activists took to the streets in 2013, accusing their MPs for making business out of politics. Photo By Pernille Bærendtsen.