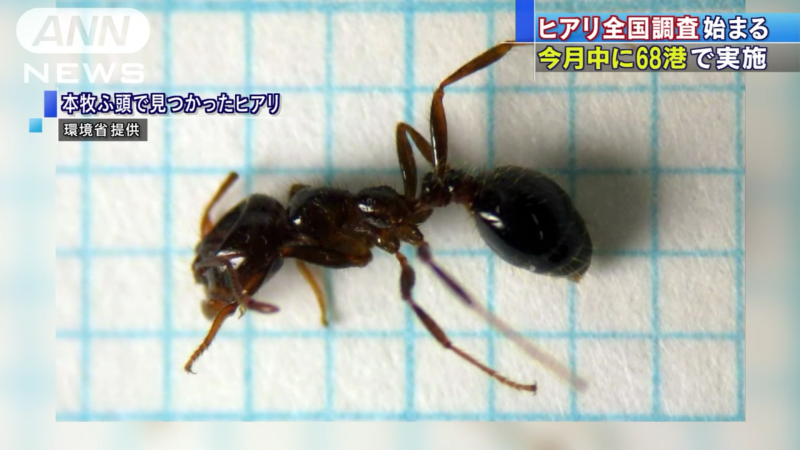 Japanese authorities have launched a campaign to search for, trap and destroy non-native fire ants in 68 locations across the country after the insects were discovered near several container ports in different parts of Japan.

The hunt for the non-native South American fire ants (Solenopsis invicta, also known as the red imported fire ant, or RIFA) began when the ants were discovered at Kobe's container port in June, 2017.

Tweet: Hunt for fire ants expands to 68 ports across Japan

Article caption: As highly venomous fire ants ants continue to be discovered in ports across Japan, search activities have been launched at ports.

Fire ants have never been observed in Japan before. Native to South America, the insect gained notoriety after successfully colonizing much of the southern United States. The ants can thrive in just about any environment, are notable for their painful sting, and have the potential to take over outdoor public spaces in Japan such as parks and playgrounds, while destroying crops.

At the same time, dozens of what may be fire ants were found and exterminated in the city of Nagaoka in Niigata, on the Japan Sea coast. Although not confirmed as fire ants, the insects in Nagaoka were said to have been found in a cardboard box shipped from the Philippines to Tokyo port’s Oi pier and then transported to Nagaoka by land.

By the end of July it was apparent fire ants were present in port facilities in Yokohama, just outside of Tokyo, as well as in two locations in Kyushu, in western Japan.

In the different locations across Japan, some ants had been found in shipping containers, while other ants were found in earth exposed by cracks in the asphalt at the port facilities.

(#Yokohama Shimbun) After highly venomous “fire ants” from South America were discovered at the Honmokufuto container terminal in Yokohama Port, the Ministry of Transportation announced to news organizations an emergency plan to seal all exposed earth in the port.

With each new discovery in July, fire ants were discovered in shipping containers that had originally come from China, which has also been colonized by fire ants since at least 2005. As a result, Japan's Ministry of Transportation has ordered extermination measures at more than 60 ports with regular cargo shipments from China. The ministry called for similar measures at 870 other ports if they accept container cargo from China.

In the meantime, fire ants, thanks to the regular stream of news reports throughout June and July, have also become a small part of Japan's 2017 summer season. For example, one Twitter user noted that fire ants have made an appearance in the Aomori Nebuta Festival, a major summer event in northern Japan that features giant paper floats: