As an Economic Crisis Grips Turkmenistan, the President Sings and Bikes

A pop song written and performed by Turkmenistan President Gurbanguly Berdimuhamedov and two of his grandchildren is attracting attention after independent media outlet Chronicles of Turkmenistan posted video of it on their Facebook page.

It's not quite at the level of worldwide smash “Despacito”, but still some fans appeared to enjoy the music:

A very good voice. Cultural leisure is necessary for everyone. The soul is enriched by this song!

Turkmenistan has an abysmal human rights record and is experiencing a difficult economic situation, with unemployment and shortages of basic goods on the rise. But Berdimuhamedov, who in February 2017 “won the hearts” of 97.69% of voters in the country's presidential election, prefers not to publicly say a word, instead propagandizing the “great achievements of the country and a successful life of his people.”

Many of those achievements are his own: “Yadimda” (Turkmen for “I Remember”) is not the first number written and sung by the Turkmen president, and writing songs and singing are not his only talents.

Berdimukhamedov, deemed “one of worst world dictators” by the Foreign Policy magazine, is the author of more than 40 books on different topics. A work of his on tea last year, for example, was received by his compatriots with almost religious reverence:

A dentist by education and a lifelong sportsman, he once forced his ministers to join him at the fitness club:

And at the end of July, in anticipation of the country's hosting of the 2017 Asian Indoor and Martial Arts Games in September, the president took part in a bike ride that shut down private motor vehicle transportation in the capital.

The 60-year-old Berdimuhamedov climbed to power at the very end of 2006 after his predecessor Saparmurat Niyazov, who had been in power since its independence from the Soviet Union in 1991, died. Niyazov, who named himself Turkmenbashi (Father of Turkmens), fostered a personality cult around his rule. Among other things, he changed the alphabet in the country to the Latin, changed the names of the months (April was named after his mother), changed the names of the week (Saturday was changed after his spiritual book “Rukhnama”), and implemented many other eccentric ideas. His “Rukhnama” became the second sacred book for Turkmens after the Quran and everyone had to learn it by heart, while around 15,000 monuments of him, including several golden ones, were built around the country. 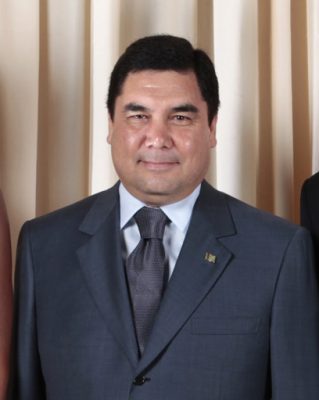 After Niyazov’s death, Berdimuhammedov, whose official titles (that he awarded to himself) include “Leader of the Nation” and “Arkadag” meaning “protector”, destroyed the personality cult of his predecessor and built up his own.

His regime kept up the restrictions on freedoms. Turkmenistan is home to the world's fourth biggest gas reserves, and is suffering from a serious economic crisis – yet will soon host the Asian Games.

Given the context, a commenter under a January 2017 news clip on YouTube of the president singing criticized him:

This is what happens when someone has a lot of money and uses the country’s wealth and resources for own private purposes. I won’t be surprised if tomorrow he wants his own spacecraft or ballistic rocket. The country is in big trouble, people are hungry and cold, and there is no economy, no production, living only because of gas sales and the great will of Saint Gurbanguly the Great.