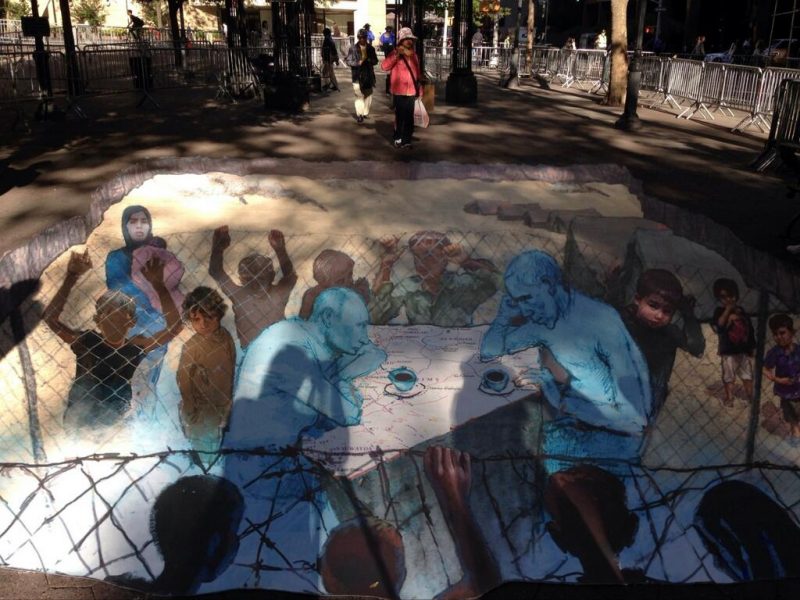 Street art at the UN General Assembly, September 2013, portraying Syrian refugees looking on to Presidents Putin and Obama sitting at a table over a map of Syria. Art by Eduardo Relero. Photo by Oxfam. CC BY-NC-ND 2.0

Sergei Davidis [2] is a Russian opposition politician and rights defender. He is a member of the council of Memorial Human Rights Center [3], and a member of the Federal Coordination Council of the 5th of December Party. [4]

SyriaUntold sat down with him to understand how Russian civil society positions itself on the Syrian conflict. This dialogue is the outcome of a partnership between SyriaUntold and openDemocracy Russia (oDR) [5], and is republished [6] here as part of Global Voices’ own partnership with SyriaUntold.

SyriaUntold: Syrian civilians have been subjected to unprecedented violence for more than six years. Why is Russian civil society silent about it? Are there underreported solidarity initiatives?

After the Kremlin decided to deploy troops in Syria [in 2015], there was a demonstration against it [in Moscow], two to three thousand people attended. There was an attempt to hold a solidarity demonstration at the height of the storm of Aleppo in November 2016 — this had a certain resonance in society, but the city authorities didn’t allow it to go ahead. Back then, there were some protest actions in a few Russian cities, although they didn’t get much in the way of numbers. There’s some solidarity with the Syrian people on Russian social networks, but it’s quite quiet.

The reasons why Russian society is silent on this issue are complex, and probably can’t be explained exhaustively. I suspect that the following factors are at play:

– the coverage of the situation in Syria by media outlets under state control. If this coverage mentions violence against civilians, then it will be acts of violence committed by IS [also known as ISIS, Islamic State, or Daesh] or the [US-led] Coalition. Russia is presented as the defender of the civilian population;

– the conflict in Syria doesn’t fit into the dichotomy of the battle between the democratic west and the autocratic Putin regime;

– the general lack of information on the situation in Syria, and the complexity of this situation for Russian citizens — to figure out what is going on, especially on the basis of fragmentary and unbalanced information, and therefore understand who should be supported and why, is very difficult;

– the Syrian context itself is culturally alien and incomprehensible for Russian citizens (in contrast to Ukraine), and the level of empathy for the Syrian people is low;

– the threat of Islamic terrorism and, in first place, Islamic State, is seen as real, and the Russian public finds it hard to distinguish the fight against IS and other military conflicts in Syria. 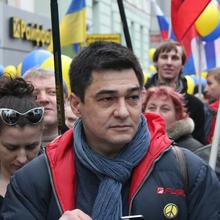 Sergei Davidis. Photo from the 5th of December Party.

SyriaUntold: What about the Russian opposition to the current government? Where does it stand on the Syrian conflict?

Davidis: The real opposition to the Russian authorities — the non-system opposition — views Putin’s war in Syria negatively. This concerns the so-called “liberal” opposition too, as well as a considerable section of the Russian nationalist opposition and the Russian left. But the main theses of Russian opposition groups are pragmatic rather than humane — Russia is using funds for a distant and unnecessary war, funds that are needed to solve the numerous internal problems at home.

Nevertheless, the idea that the Putin regime is waging war in Syria to support Bashar Al-Asad, to oppose the west and satisfy his own geopolitical ambitions, rather than really confronting IS and other terrorist groups, is seen as more or less self-evident by the opposition.

SyriaUntold: Is indifference towards Syria somehow related to the poor status of civil liberties in today's Russia?

Davidis: It’s difficult to judge the connection between the two exactly. But there’s definitely something. At a minimum, the numerous problems with rights and freedoms in Russia suck up a lot of time from the section of Russian society that is, in principle, ready to express its concern with these domestic issues, which doesn’t leave energy for problems taking place far from Russia. Moreover, the constant limitations on freedom of assembly and expression make getting your position across to the rest of society all the more difficult.

SyriaUntold: To what extent can apathy towards the Syrian cause be ascribed to general indifference towards remote conflicts and to what extent is it a signal of widespread support for the Russian government’s policies in Syria?

Davidis: Both factors are present here, but to understand their contribution, a comparison with the annexation of Crimea and aggression towards Ukraine is telling. According to polls, these actions by the Russian authorities had far more support from society. However, the protest against state aggression and solidarity with the Ukrainian people was significantly more noticeable in Russian society. So, in terms of Syria, support for the Russian authorities’ actions is extremely passive. Indeed, it is precisely indifference to a distant, foreign and incredibly complex conflict that is key here.

SyriaUntold: To what extent are reliable and diversified sources of information on Syria available in Russian in the country? What is the general perception of the Russian media’s coverage of Syria? What about the prevailing view on how western media are covering the conflict?

Davidis: It’s hard to say, at least in Russia, what sources of information about events in Syria are absolutely reliable. But of course, it’s impossible to talk about diversification of information resources in Russia. In official media, which are more or less the main source of information for the majority of Russian citizens, the coverage is purely propagandistic and prejudiced. In the few oppositional media and the internet, diversification comes down to refuting official information, drawing attention to the Russian casualties, expenditure of funds on the war, foreign policy and military failures of Putin and Assad, rather than an attempt to paint a real, holistic picture of what’s going on in Syria.

The picture of the Syrian conflict, which you can see in the mainstream western press, is practically inaccessible to the Russian viewer — the kind of information paradigm (not only in its relationship to Syria, but in terms of attention paid) isn’t available in Russian, including in opposition media. The picture you see in Russia’s official and pro-government media is principally different, opposite, from its western counterpart — and it’s the same in the alternative press.

SyriaUntold: Is there any Syrian civil actor, intellectual, or artist who has managed to reach the Russian audience? Because of the historical relations between the Assad regime and the USSR-Russia, a significant number of Syrians have lived in Russia, and some of them even speak Russian fluently. What is the role of this Russophone Syrian community in Russia and abroad? Does it have any impact on how the narrative on Syria is shaped in Russia?

Davidis: I can’t think of any successful examples where Syrians have appealed to the Russian public, or any role played by Russian-speaking Syrians. The only instance I can think of is, perhaps, the statements made by Muhammed Fares, the first Syrian cosmonaut. Fares, who conducted a mission on the Mir space station in 1987, joined the opposition in 2012 and eventually fled to Turkey. In November 2015, Fares called [8] on the Russian people to support the fight against Assad — and this had a certain resonance in society.

SyriaUntold: Some have argued that Islamophobia has played a role in decreasing empathy for the Syrian cause (especially in comparison with the Ukrainian cause). If so, do Russians look at Syria in the same way they look at Chechnya, therefore sharing the same prejudices on an allegedly Islamic cause? What about Russian Muslims? Are they vocal about Syria or is mobilization limited to Islamist hardliners?

Davidis: I don’t think that Islamophobia is crucial to understanding the indifference of Russian citizens to Syria. It plays a certain role. Society doesn’t want to understand the internal confrontations or waste energy on distinguishing IS terrorists and other groups fighting in Syria, thereby risking the possibility of being wrong.

But a comparison with Chechnya shows that Islamophobia isn’t key. The level of empathy for the Chechen people during the first and even second Chechen wars was far higher. This was probably connected to the geographical, cultural and historical closeness of Chechnya (and the casualties, terror attacks, mass involvement in military actions from across Russia, and because the war was so physically close).

I’m not well informed enough about how Russian Muslims feel about this situation, but what I do know tells me that their positions are defined by their relationship to the Russian authorities. Supporters of the regime tend to support its position, including Syria, whereas opponents are more likely to sympathize with IS. But as far as I know, there’s been no actions in support of Syrian civilians, actions against Asad or Russia’s role in the war, by Russian Muslims.

SyriaUntold: In Europe, siding with the Syrian regime has become a common trend among wide segments of the traditional left (under the guise of “anti-imperialism”) and the far right-wing (for Islamophobic reasons and in the hope of curbing the unwanted waves of refugees through stable “secular” dictatorships). A growing number of decision-makers are also rehabilitating the Assad regime under the pretext that, in their view, it’s the lesser of two evils (the latter being Sunni jihadism) and its collaboration is helpful in restabilizing global security. Are there any similarities with the Russian political landscape and, if not, how does it differ from Europe with regards to Syria?

Davidis: The Russian authorities, and the “experts” and media who support them, use elements of similar rhetoric. But with the absence of public politics and public discussion in the western understanding, these arguments remain instruments of building support for the authorities’ actions, rather than a subject of substantive political and civic debate.

The support for the Assad regime and the military operation in Syria is based on the public position of the Russian authorities, which is passively shared by a significant section of Russian society. This position can be explained as follows:

– This support is the most effective and natural means of fighting IS and terrorist groups like it, and a chance to stop them far from Russia’s borders;

– The Assad regime, which is a legal, democratically elected regime that is realizing Syria’s sovereignty, defending it against external aggression, international terrorism and color revolutions [9] from outside, is legally and morally justified;

– Participation in the military operation in Syria, the support and maintenance of a friendly regime in the Middle East allows Russia to oppose its geopolitical enemy — the west, and, in particular, the US, as well as to show the might and importance of Russia, test new military equipment, and give practical military experience to the Russian army.