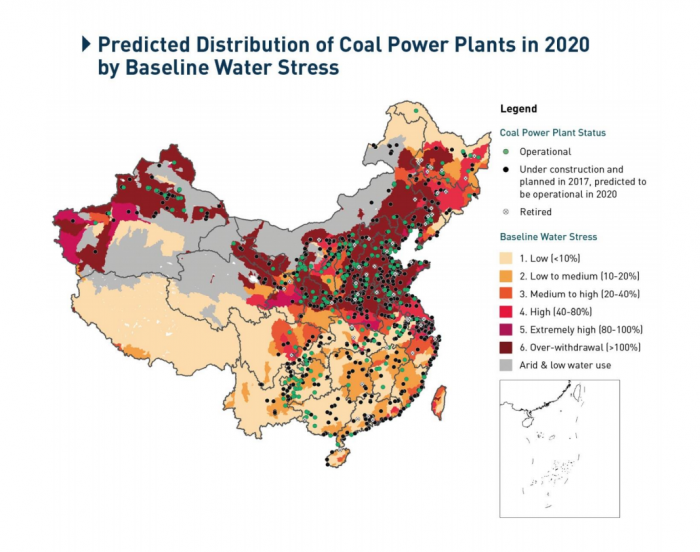 Greenpeace took down the map and admitted that it had made an error by including Taiwan as part of China.

Environmental action group Greenpeace is facing a fundraising crisis in Taiwan after it included the island in a map of China.

Taiwan has been a self-ruling political entity since 1950, but China claims the territory and has pushed the international community to break official ties with the Taiwanese government.

Greenpeace apologized and said it was an error, but the public statement didn't stop Taiwanese from making their anger known on the organization's official Facebook page and calling on their compatriots to stop donating.

NGO workers also speculated that the inclusion wasn't actually a mistake, but a consequence of China's foreign NGO management law, which requires groups operating in the country to have a government entity sponsor.

The map of China was part of a report, “Analysis: How cutting China’s coal overcapacity could help tackle its water woes,” released on July 5, and the inclusion of Taiwan quickly caught local attention. Chiu Yubin, former chairperson of Taiwan Association for Human Rights, commented on Facebook two days after the report went online:

Greenpeace raises more than 100 million Taiwanese dollars from Taiwan every year, but it only hires a few campaigners in Taiwan. The group is not very vocal in domestic environmental issues. More importantly, they raise so much from Taiwanese and now they place Taiwan within China’s territory.

Please let others know about this. If possible, you can transfer your donation from Greenpeace to local environmental groups, like Green Citizen Action Association, Citizen of the Earth, Homemakers United Foundation, Taiwan Environmental Protection Union, Environmental Jurists Association and etc.

Come to Taiwan for cash and tread on Taiwan, this is too hypocritical.

His status was shared more than 1,400 times and sparked a social media campaign to withdraw donations from Greenpeace.

In response, Greenpeace East Asia quickly issued an apology, took down the map and explained that it was a mistake. Moreover, they referred to their funding report 2015 and 2016 to show that the funds raised in Taiwan had been allocated for local campaigns.

But the apology didn't cool the outrage. In about two weeks, more than 4,000 people visited Greenpeace’s Facebook page and gave them a one-star rating. Many also left comments such as this one:

Stop donating to this unconscious organization which insults all people living in Taiwan. It can not be trusted cuz it cannot face the truth which Taiwan is never belong to People Republic of China.

An ex-Greenpeace staff Renee Chou explained what had possibly gone wrong on the one hand and defended Greenpeace’s work on the other:

I have encountered similar errors many times when I was working [at Greenpeace]. What we could do was to keep communicating with other Greenpeace offices why Taiwan should not be placed inside the map of China. Such rounds and rounds of explanation about “Taiwan not being a part of China” have become internal advocacy and alternative diplomacy.

If we shifted our position, colleagues from the China office were constantly reminded about the position and compromised. Similar maps appeared but they were blocked before going public and hence we didn't encounter this crisis before… Greenpeace is based in North America and it has been using action, public opinion and citizen power to monitor governments and corporations. Such strategies do not work out in authoritarian China.

Colleagues in the Greenpeace China office tried to maximize the impact of environmental protection work and sometimes jeopardized their own security within the limits of political restriction. This is something that I truly respect.

However, another Greenpeace supporter believed that an environmental campaign should not be defined by borders and accused the current criticism of being too antagonistic:

[They said] the 200 million Taiwanese dollars raised in Taiwan should be spent locally! This is a very pathetic and narrow-minded demand in this global era. Let’s take the example of Greenpeace’s fashion detox campaign, most headquarters of chain fashion stores are located in Europe and the US and their factories are in China while their customers are all over the world, including Taiwan. If we really have to detox the manufacturing process of fashion companies, the most effective way is calling for a global boycott. More importantly, we have to pressure the headquarters and ask them to change their policies. […] In other word, even if Greenpeace spent 200 million to hire 20,000 people to protest in front of the H&M flagship store in Taipei, it would not change the policy. The whole production chain has been globalized and Taiwan is at the end of the production chain. The money has to spend on critical spots.

The map error also touched on China's foreign NGO management law that went into effect in January 2017. The legislation says any group operating in China must register with the police and be sponsored by a government entity. Given that Beijing's official position is that Taiwan is a part of Chinese territory, it's likely Greenpeace and other NGOs will face similar conflicts in the future.

Let’s put aside [identity] complexes and feelings of being hurt [by the error on the map], the crisis that Greenpeace is facing is a signal reflecting the relationship between the state machine and NGOs: We’ve talking about the threat of mainland China’s legislation on foreign NGO management. It has taken effect now. No matter how angry and how maligned Taiwanese feel, Greenpeace’s China office has no other choice and for sure similar “errors” will continue to happen in the future […]
Here I quote from a NGO worker in China: “In Taiwan, it is very easy for you to chant the slogan of independence and autonomy, but in China, the price is that the dozen people in the office would disappear the next day.” Facing such a dilemma, you have to make a choice concerning your values — the environment is a global issue and everything is connected. China is so huge that it has great impact on manufacturing and environmental policies and any environmental campaign could not avoid China. As an environmental organization, what should you do? As a Taiwanese, what should you do? As a member of the global village, what should you do? Even if we put aside our nationalistic sentiment [of being Taiwanese], as a person who hates the violent and authoritative regime under the Chinese Communist Party, what should we do?

Chou did not provide any answers for those questions, saying it's a value judgment that every single individual has to make on their own.