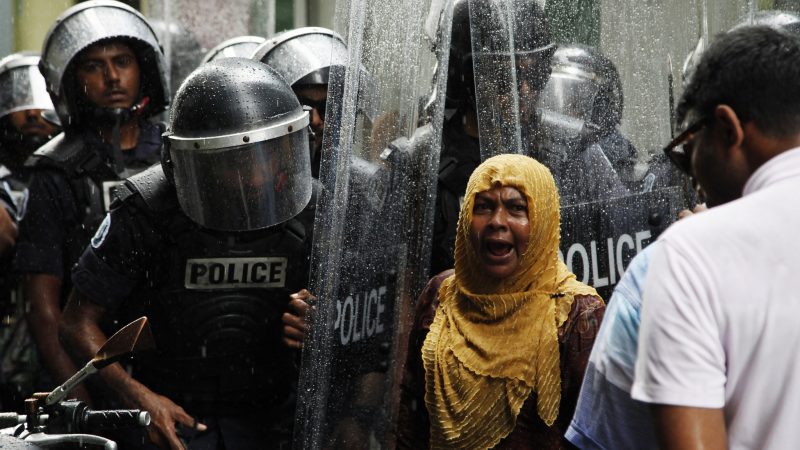 On Monday morning, July 31, the Maldives political scene heated up as opposition members of parliament protested in the People's Majlis, the Maldives’ unicameral legislative body, and soldiers surrounded and secured its speaker, the Honorable Abdulla Maseeh Mohammed. This happened just one week after police officers and military personnel forcibly dragged out opposition lawmakers from the Majlis and arrested two lawmakers on the afternoon of July 24 in the capital of Male.

Soldiers in plainclothes inside Parliament, to remove Opposition. No legal grounds for soldiers inside chambers before session begins. pic.twitter.com/ZI5CJLxkzV

On July 3, the four-party coalition Maldives United Opposition (MUO) had submitted a no-confidence motion against Abdulla Maseeh Mohamed with 45 signatories from the 85-member house, where 42 signatures are required to move the motion. Speaker Maseeh is a key ally of Maldives President Abdulla Yameen Abdul Gayoom, who is battling several charges of corruption against him.

The ruling Progressive Party of Maldives (PPM) challenged the validity of the no-confidence motion in the Supreme Court, asking whether the former lawmakers of the PPM, who are signatories, would be subjected to anti-defection measures. On July 13, the Supreme Court granted an anti-defection ruling sought by the Attorney General which states lawmakers will lose their seats if the electoral body notifies Parliament that they 1.) left their party 2.) have been expelled or 3.) switched parties.

On the basis of this ruling, four opposition lawmakers were stripped of their seats, which rendered the scheduled July 24 no-confidence vote against the speaker void because the valid number of signatures on the opposition-led motion fell below the minimum number 42. This created an uproar in the country. Opposition MP Rozaina Adam tweeted:

Reacting to the ruling, Maldives United Opposition (MUO) demanded the no-confidence motion must be put to discussion and a vote as scheduled on July 24 and called on supporters to take to the streets. They also questioned the Majlis’ negation of the no-confidence motion and suspension of all meetings until July 31, citing “enhanced security arrangements in the capital for the Independence Day festivities.” In response, the MUO referenced a constitutional requirement for a meeting after 14 days of the submission of the motion.

The Maldivian government locked down the parliament, cordoned off by security forces, and warned of a crackdown on protests. On July 24, nearly all opposition lawmakers marched toward the Majlis, managing to breach the cordon and enter parliamentary premises. The military responded by dragging and removing opposition lawmakers outside, where they continued to protest alongside approximately 300 supporters. Pepper spray was hurled at protesters and several people were arrested including two lawmakers and a number of journalists.

The ordeals of the day were vivid on Twitter:

Opposition lawmakers get in to the Parliament, despite police and military blockade. pic.twitter.com/tuJ9GfIWR4

Maldives Constitution has been suspended while the Parliament is under-siege by Maldives National Defence Force. (1/2) pic.twitter.com/i3wblT5BIv

A press release by the Majlis Secretariat defended the use of Maldives National Defense Force, decrying “false claims” of a military takeover of parliament.

Appalled by the way Hon MPs were mishandled both inside parliament & on the roads today. All MPs MUST be respected. #NationFirst

The Maldives transitioned to a democracy in 2008 but experienced political instability after its first democratically elected president, Mohamed Nasheed, was forced out in an alleged “coup” in 2012. President Abdulla Yameen won the controversial presidential election in 2013. The country is tilting toward authoritarianism as growing accusations mount against President Yameen for silencing dissent and imprisoning political opponents, including Nasheed, under allegedly made up charges.

The Maldives United Opposition was launched a year ago by a coalition of opposition parties led by Nasheed, former President and Maldivian Democratic Party leader, who now lives exile in the U.K., evading a jail-term in Maldives. Their main agenda is to restore democracy by removing President Abdulla Yameen Abdul Gayoom through legal means and trying him for money laundering and other charges.

Last September, “Stealing Paradise,” an investigative exposé by Al Jazeera, revealed how President Yameen and his associates embezzled millions of dollars, bribed judges and other high-level officials, and used influence to remove government workers who stood in their way. The Maldives government has labeled the investigative report as biased and defamatory.

The United Nations has expressed concern over the crackdown on the opposition and the media after the lockdown in the parliament.

It remains to be seen how President Yameen handles the growing opposition against him, using his influence to activate the judiciary for his political purpose.