The Rise and Fall of a ‘Patriotic Investment Charity’ in China 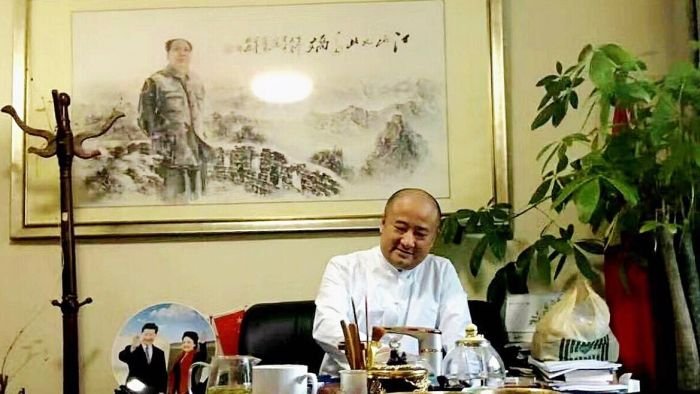 Zhang Tianming, the founder of Shanxinhui was arrested for suspicious scam. Zhang decorates his office with Chairman Mao's portrait. Image from Twitter @aboluowang

Beijing has seen its biggest protests in recent years after the founder of Shanxinhui was arrested for running an operation similar to a pyramid or Ponzi scheme.

Shanxinhui is a popular investment company that promotes itself as a “patriotic charity”. Despite the government crackdown, many of the company's 5 million investors insist that Shanxinhui is a legitimate patriotic business.

Shanxinhui, which means “kindhearted exchange” in Chinese, was registered as a business in 2013 with a goal of spreading “positive” and “virtuous” culture in China. Through its online investment platform, Shanxihui offers a high return rate to individual investors, and promises donations to charitable causes and government-endorsed programs to help the poor.

Every night at 8:30 pm, Zhang Tianming has a live-streamed video section on its website for its investors, where it reports the company’s commitment to charity work and encourages members to share their kindness by inviting more people to join the investment scheme.

Authorities accuse Zhang Tianming, the founder of Shanxinhui, of defrauding “a huge amount of property” from victims “under the guise of helping the poor and achieving common wealth.”

Earlier this year, Shanxinhui was promoted and featured in a number of official media outlets including the state-owned China.com.cn, China Central Television, Hainan Television and Xinhua News. During the interviews, Zhang Tianming emphasized that the company was an innovative attempt at charity and was meant to help fulfil Chinese President Xi Jinping’s China Dream. Here is the company’s introduction:

Shanxinhui upholds the culture of kindness as its core value, works with all walks of life to practice the socialist core value, advocates “the aggregation of kindnesses for a harmonious heaven and earth”. It’s business principle is “market demand as standard, consumer’s interest as foundation, state patriotism as direction”. It explores a new economic model that helps the country to allocate resources for poverty relief and demand-oriented reform so as to build a harmonious society with common prosperity, assisting the state in the China dream of national revival.

Even after China's public security bureau explained on social media how the company made profits through a Ponzi scheme, members of the investment-cum-charity company believe the crackdown is a result of a “failed blackmailing” of the group.

More than 50,000 people, many of whom carried Chinese flags, demonstrated outside Beijing’s Dahongmen International Convention Exhibition Centre and the Supreme People’s Procuratorate on July 24 demanding the release of Zhang Tianming, the founder of Shanxinhui.

For some, the protests was a deja vu of the massive Falun Gong protests in 1999 outside Zhongnanhai. Back then, the Chinese Communist Party (CCP) responded with a series of crackdowns on the religious group.

Similar to members of Falun Gong in 1999, Shanxinhui's protesters are very loyal to the ruling CCP. Independent media outlet @iyouport posted a video showing protesters peaceful kneed down outside Dahongmen:

The head of the marketing business “Shanxinhui” has been arrested. Hearsay, more than 6 million people were cheated.

Twitter user @suxinPL talked to one of the members near the protest site:

This woman is a member of Shanxinhui. She was talking to onlookers near the protest site and explained to them how the authorities had abused their power. She stressed they were not protesting but petitioning. She also said that the gathering was not organized, members just spontaneous gathered at the spot where their leader was arrested illegally. Her presentation is very rational with self-restraint, with is different from the democratic political circle.

Members of Shanxinhui believed that Zhang was arrested for rejecting “blackmail” by the Yongzhou public security bureau. Their version of the story was told in a smaller scale protest which took place in June outside the Yongzhou city government building. The protest scene was recorded by Twitter news outlet @Images from China (即时中国大陆映像) :

Shanxinhui members protested outside Yongzhou city government last month. On June 4 this year, Yongzhou public security bureau demanded Shanxinhui to give a “guarantee fee” of RMB 20 million [approximately US$ 2.97 million] as the company was under suspicion of fraud. The company's director Zhang Tianming rejected the payment. That night, an investigation team from Yongzhou public security bureau arrested 8 technical staff members from the company’s data center. A few members of the group were arrested and an over RMB 110 million [approximately US$15 million] investment fund had been suspended.

Since 2015, a number of online peer-to-peer lending platforms have been cracked down on for involvement in financial scams. During the same period, Shanxinhui’s “charitable financing service” business was taking off quickly.

Despite quick deletion of posts about Shanxinhui’s charity work, news and photos about the massive protests and critical comments questioning the police crackdown, Shanxinhui’s supporters keep voicing out on different news threads. Below is a selection of the group’s followers’ comments:

The corrupt police put up a trap to crackdown on the excellent national corporation, it will face retribution.

Such a charitable platform, no one has lost money. Everyone is aided. We contribute our money to help those in need voluntarily. What have we sold out? Why keep deleting our posts about the good deeds we have done? Isn’t that we have to praise positive acts? For all the charity work that we have done, why don’t you report on them? The public security officers have committed crime on purpose and are they allowed to do that?

I am an university student and I am speaking for justice. Why has the public security police deleted posts about all the charity work and yesterday's massive protest incident? All the posts about the group’s donation have been deleted, petitions have been stopped, and protesters have been beaten. If people were guilty, can’t you openly, fairly and publicly present the case? Some powerful people are behind the crackdown.

On the other hand, supporters of the police action criticized members of Shanxinhui for having been “brainwashed” by the group. Some even labelled the group as a religious cult similar to Falun Gong, which has been outlawed by the communist party since in 1999. Below are a selection of pro-government comments:

Ponzi scheme company’s online navy are low in quality and IQ. With such low IQ how can you turn black into white?

Don’t argue anymore, they have been brainwashed and you can’t save them. Their chief has been arrested and they have lost money, of course they feel that the government has wronged them and unjustly arrested people. Their path to fortune has been destroyed.

SXH is more threatening that Falun gong. The young generation does not believe in FLG, but there are so many young people in SXH. They don’t work hard and just dream about making a fortune. The flowers of motherland have fallen to the scum of the society. They don’t work and are not creative. How can the society move on without a work ethic? Ponzi scheme style marketing is an evil cult that destroys the country and the people – this is the best description of SXH. People demand that such evil entities should be punished.

For those who neither stand-by Shanxinhui nor the authorities, they were critical of how the incident was handled. A netizen commented on Weibo:

Hearsay, Shanxinhui has more than 5 million members. Why hasn’t the police stopped them from expanding in the first place. How many family have been ruined [because of the crackdown]? Why does justice come so late? This company has been registered under Administration of Industry and Commerce. It started its scheme more than two years ago and the government just took notice? Now so many people have been cheated, the government said: the law would not protect a Ponzi scheme. When we needed protection, where was law enforcement. I feel pain for my country.

Outside the great firewall, Twitter user @lichengyi pointed out that the the appropriation of patriotism for personal gain has become a rather commonly seen phenomenon in China:

Shanxinhui has development into massive protests at Dahongmen in Beijing. No one could imagine that the leader of the Ponzi scheme cheated money in the name of “charity”, “party”, “state” and “people” and all the politically correct rhetorics. For me, those who keep saying that they love the country or those who change the national flag into their leader’s portrait are most likely evil people whose version of patriotism is shortsighted and twisted. The failure of our patriotic education is that we have not taught people how to love the country genuinely.