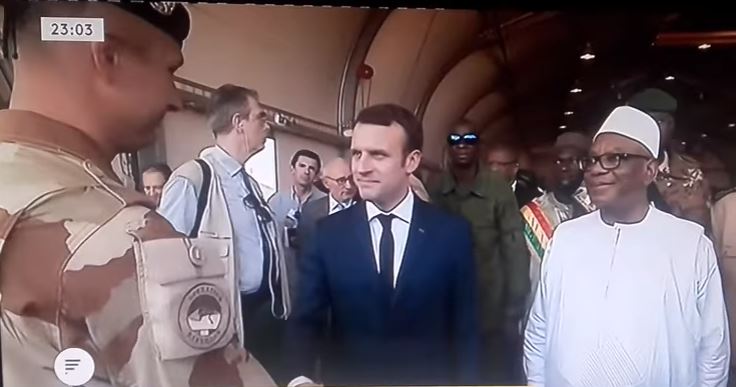 July 11, 1987 marks the Day of 5 Billion, or the approximate date when the world reached a population of five billion. As a result, beginning in 1989 the United Nations Development Program created World Population Day, an event celebrated on July 11 each year in the hopes of attracting the world’s attention to the urgency and importance of population issues.

With resolution 45/216 passed in December of 1990, the UN General Assembly decided to keep World Population Day in order to promote awareness and, above all, to promote the links between population issues, the environment, and development. By 1990, many countries began following the UNDP’s lead and started celebrating the day in their own countries.

Each year a theme is chosen, with this year's being: “Family Planning: Giving people the ability to act, contributing to the development of countries“. As fate would have it, this year the date coincided with remarks from French president Emmanuel Macron about the exploding demography of Africa. His comments sparked a lively debate on social media and came in response to questions from an African journalist during a press conference at the G20 summit. The site koaci.com took stock:

French president Emmanuel Macron created a polemic by linking the underdevelopment of Africa to its demography during a press conference at the G20 in Hamburg, Germany. At the G20, the new French head of state created the polemic by attacking African women's fertility. When asked about African development, Emmanuel Macron pointed to the ‘7 to 8 children’ from African women as a ‘societal’ problem. ‘Africa's challenge’, ‘It's societal’, stated Mr. Emmanuel Macron: ‘What are Africa's problems?’ He then cites ‘failed states, complex democratic transitions, a demographic change which is (…) one of the defining challenges for Africa’. ‘When countries still have 7 to 8 children per woman, you can decide whether to spend billions of euros, you stabilize nothing’, he followed.

Here is a video of the speech (click on image to play video): 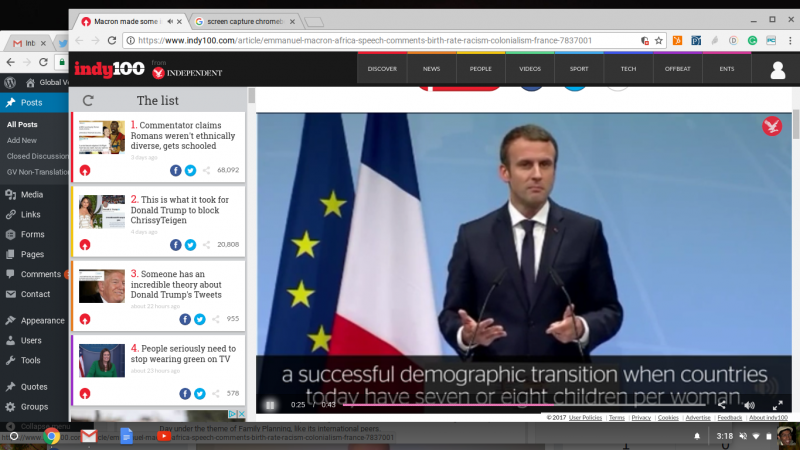 screen capture of video of E. Macron from Indy100

While waiting for African heads of state to react to these remarks, members of the site visionguinee.info were astonished:

No statement, no reaction from any African presidents. The presidential chapels did not toll with bells of indignation.  With a guilty silence, lasting just the right amount of time, African heads of state, regional organization or sub-regional, did not release any statements lamenting or framing Macron's condescending comments on the exploding demography which is curbing Africa's development… The media outcry concerning Macron's comments matches the reactions of indignation and condemnation on social media.  Responding to an Ivorian reporter's questions at the G20 summit in Germany, Macron made the link between the underdevelopment of Africa and the demographic explosion on the continent in remarks which resembled Nicolas Sarkozy's 2007 Dakar speech.

Facebook user Bouba Camara, in response to a comment by Mohamed Camara, president of the Association for the Promotion of Democracy and Good Governance, supported the French president's remarks but also added his own criticism, writing:

My dear president the fact that we have a growing demographic is a fact which no one can deny, but the question that we must ask: is this up to a non-African president to tell our women how many children they should have?  I say no because French Colonial Africa is behind us. I believe rather it is for our respective African governments to fight against this trend, and only if it is truly a liability.  Doing this by opting for good birth and infant mortality policies, but also implementing a family planning system as all other concerned governments do for their populations; without omitting that what he shames us for is also an advantage in another sense, because African populations are largely young and active, thus guaranteeing retirement for our predecessors.  While in the West, the population is aging, inactive, and so inactive so their retirement is in danger, this is a fact.

I believe Macron has felt the full extent of our anger. From now on he and others will take a moment before broaching with glibness the difficult realities of Africa.  What was the shocking for me is the twisting of reality.  Beyond the impression of a lecturing teacher, overall, his comments are false.  From the Marshall Plan, to public development aid via the demographic issue in order to finish on the diagnoses of problems which plague the continent.  A damaging, simplistic generalization and lack of accountability for his own country and continent on the situation Africa is in.  To the Africans who say that the best way to respond to Macron is to ignore him, I want to know why you are opening your mouths? Shut it, and let us answer.  We're not responding out of emotion, we're responding in order to establish the truth!

Noel Gnimassou, living in Fria, a city in the interior of Guinea, observed:

Here is what irritates me about Africans: they assume the right to criticize the West, to mock them, even insult them. Sarkozy this, Trump that, Macron's a racist, etc. We publish jokes, photos, and caricatures of them.  We dissect and condemn their statements often by questioning their ability to handle the affairs of their own country and of the world. But we Africans barely tolerate the least bit of criticism towards us, be it objective or constructive.

This observation generated a number of reactions, not always in agreement. Clairefall Fatou, a stylist who is based in Dakar, wrote:

Why not have 7 or 8 children when one can support them? It's a joy living in a big family!  We have to be proud of our culture, it's beautiful and what works for others does not necessarily work for us Africans.  Stop underestimating us! We have potential, and I believe everyone must set to work for the future of Africa.

The debate was not limited to social media users. In fact, even the president of the African Union, Alpha Condé, head of state of Guinea, entered the debate. While Guinea is the country which sends the third most migrants to Europe across the Mediterranean, he was indignant, outspoken, and declared:

When you speak of the explosive demographic, this is Malthusian, this is against Africa. Today, the other continents envy our demography, because they are an aging population. Our youth is our advantage. Therefore, we must adapt our language for what we want for Africa.

There is good reason to wonder if “His Excellency the Professor Alpha Condé President of Guinea”, as the media officials call him, spoke on behalf of all his peers. In fact, World Population Day, with its theme of Family Planning, was celebrated in nearly all of Africa.  For example in Niger, the minister of population, Dr. Kaffa Rakiatou Christelle Jackou, and in Burkina Faso, Ms. Rosine Coulibaly, minister in charge of development, minister of economy, of finance and of development, emphasized the importance of controlling the growing demographic, as well as the need to improve access to family planning methods for women's empowerment and reduce the challenges that the exploding demography poses to weak African economies.

Even in Guinea itself there seemed to be mixed reactions, with the national director of population and development (DNPD), Mohamed Sano, emphasizing that Guinea would also be celebrating World Population Day under the theme of Family Planning, like its international peers.