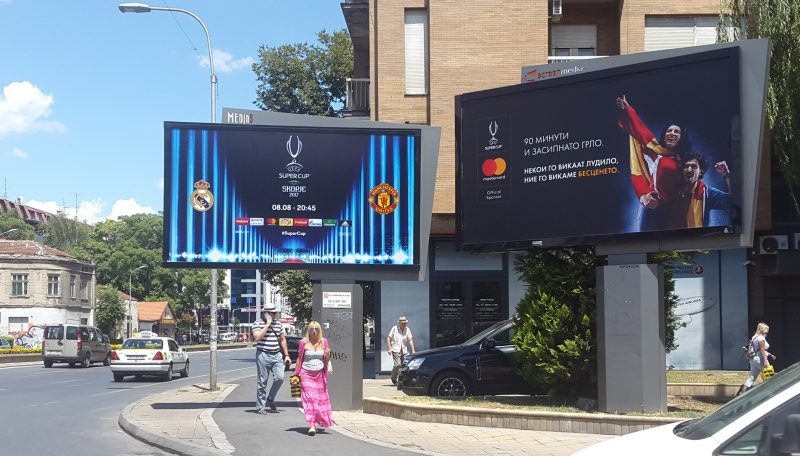 Billboards announcing the Super Cup match in Skopje. The one on the right features a message by a sponsor: “90 minutes and a sore throat. Some call it lunacy, we call it priceless.” Photo by GV, CC-BY.

The 42nd United European Football Association (UEFA) Super Cup pits Real Madrid, reigning Champions League victor, against Manchester United, Europa League champion in Skopje, Macedonia on the 8th of August, 2017. Tens of thousands of fans from Spain and England as well as all over the world are expected to pour into the Macedonian capital in a just a few days time.

The Macedonian hotel and catering industry has decided to cash in on this. Big time. If you want to stay in Skopje between August 7 and 9, tourists will have to pay from 500 up to 3,500 Euro. In comparison, the usual hotel prices range from 30 to 75 Euro per night.

Screenshot of some of the Airbnb accommodation options in Skopje during the Super Cup weekend.

Some of the would-be guests from the UK and Spain announced that they would book accommodation in other cities or even in the neighboring countries, and travel to Skopje for the match only.

Haaa, fans will spend the night in Sofia and Thessaloniki because Skopje is too expensive. Now this, greedy people, is what I call a missed opportunity and bad marketing for the future.

As a reaction to the overpricing, some regular citizens of Skopje have decided to offer free beds in their homes to football fans who already have tickets for the match. A bunch of young IT and marketing professionals who call themselves ‘We Talk IT Community’ went even further and used their skills to create a platform that gives Manchester United and Real Madrid fans the means of connecting with people offering free accommodation for a night or two: supercupskopje.com. Their service is simple: connect football fans from all over the world with Macedonians who can offer free beds.

Anita Kirkovska, a member of the We Talk IT community, explained the process in an interview for Global Voices: 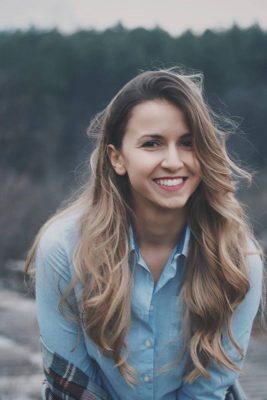 Anita Kirkovska (AV): We built this platform on a weekend hackathon, in like 48 hours. We knew that the match is going to bе held in two weeks, so we wanted to offer a solution as fast as we could. All of the members in the We Talk IT community are tired of everyone just complaining about the challenges we have as a country, so we wanted to act for a change. The burden that the hoteliers put on Skopje again, we were working on getting it fixed. And now, we are doing that, 20 listings a day. Good people of Macedonia, you rock!

The idea of the platform is to be informative and to act as a mediator, so all accommodation details are agreed out of our platform, between the hosts and guests via email. After all, this is open source volunteering project. We are not responsible for the interactions that hosts and guests have, so we recommend to them to use good judgment and keep safety in mind when they use our services.

The platform is an open source project and everyone in the Tech community can contribute to improving it.

A few hours after the launch, the platform went viral. By the end of the first day, their server crashed. “We really didn’t know what to expect or how people will react to this. We sure had some negative feedback, but that is normal,” Anita says, adding that they received attention from top national news and digital media outlets.

Right now they have over 50 active listings with more than 100 available beds, published over the course of three days with over 2,000 web page shares. By July 27, hosts from the We TalkIT platform confirmed accommodations for at least two fan groups.

Soaring hotel prices triggering British and Spanish fans who feel ‘ripped off’ is not the only problem faced by Super Cup organizers. Although authorities knew that Skopje would host the Super Cup since June of 2015, UEFA officials visiting in June of this year had a number of concerns regarding the stadium's readiness to host a match of this size.

During June 2017, Macedonia also transitioned to a new government. State secretary Dragi Rashkovski recently said they will do everything in their power to resolve all of the UEFA officials’ remarks and to organize the Super Cup in Skopje at the highest level of excellence.

Social media users have strongly criticized Super Cup promotional videos. Some media outlets even tried to portray the video released by the Macedonian Football Federation as official UEFA content that glorifies the controversial Skopje 2014 project, designed to revamp the capital of Macedonia into Europe's quasi-baroque ‘capital of kitsch.’

The second promotional video, published by the city of Skopje, also received strong criticism on social media for being too ‘glossy.’ The one-minute, 42-second clip gives tips to visitors on Skopje's sightseeing, food, and drinks:

In contrast, one citizen of Skopje gave real “life-hack” tips for the football fans via Facebook, receiving hundreds of likes and several dozens of shares:

1. The public transport sucks. You need to go through an administrative hell in order to get a ride. You cannot pay in the bus and it will cost you a fortune if you get caught without a ticket.
2. The taxis are cheap when they have a meter, so use them instead.
3. You can buy alcohol at the store only before 9 PM.
4. Bars close at 1 AM, and clubs are open until 3 AM.
5. Only street casinos are open after that.
6. They usually serve small beer bottles.
7. Restaurants take their last order at 11 PM.
8. There is no strip/sex/swing club in Skopje.
9. There is no legal prostitution in Skopje. Street workers are not recommended.
10. There are no public toilets in Skopje.
11. Stay away from stray dogs in big groups.
12. Stay away from the grass, there is dog poo everywhere.
13. Cars will not stop for you on the zebra. You have to wait.
14. Public love affections are fine, unless you are gay.
15. Drug users are hunted by a special police force in civilian clothes. Be careful not to use in public.