Venezuela: The Horror Beyond the Door 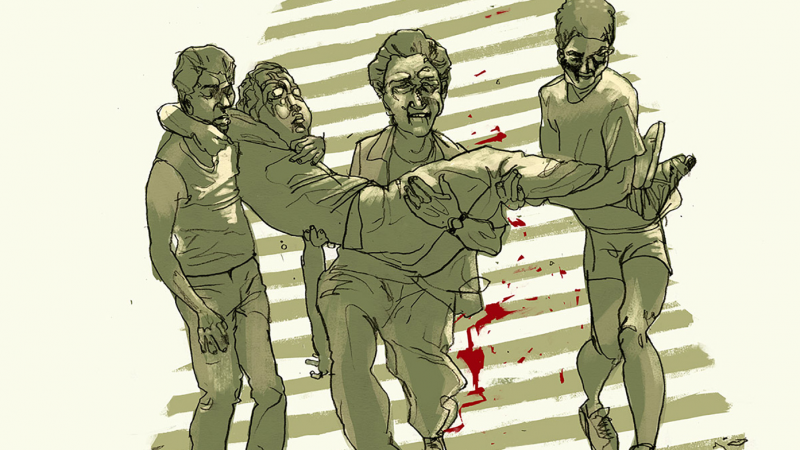 This post is the fifth of a series originally published by the author on Medium. Click on the links to read the first , second, third and fourth installments.

I heard the first explosion early that day. It was just after 10am that the National Guard tossed the first tear gas bomb on my street. I peeped out of the window and saw the rapidly rising spiral of dense white smoke. On one corner a small group of protestors had thrown themselves to the ground while another group screamed and fled in the opposite direction to the racket caused by the explosion.

“They started early!” my neighbour yelled from the adjacent window.

I watched the people running along the street. Officers wearing helmets and protective vests chased them, their firearms raised. The figures disappeared amongst the thick clouds of toxic gas. My skin began stinging, my throat closing up. I quickly closed the window. Another explosion went off, so close this time that it rattled the windows. When I looked for my neighbour’s terrace, I couldn't make it out. The toxic cloud of white smoke advances with frightening speed, engulfs everything, contaminates every possible nook and cranny.

I still didn’t understand the motive behind the attack. Is there a reason for this excessive force? The mere thought fills me with sorrow. Of course, there is no reason. There never has been. In Venezuela, you’re a criminal for simply expressing your opinion.

The protesters continued along the next street, chanting and brandishing banners. A sizeable group. A diverse crowd, enthusiastic and optimistic. The violence cut their march short, reminded them of their boundaries, of the power of aggression and repression. Our crime is exercising a basic right, the mere idea of citizenship.

Another explosion. This time I couldn’t pinpoint where it came from or what it was. Gas? Grenade? The distinction hardly matters in Venezuela. I stood in my studio and through the glass I observed the city that had become a blur, flickering between brilliant yellow and increasingly dense amber. Shivers went down my spine, an ice-cold jolt that made me shudder, my eyes opening wide. The first explosion triggered two or three in rapid succession. The street was cloaked in dark smoke. A group of pedestrians ran to the next street and split into two. I heard their shouts, their insults. Later, I simply heard their fear.

I rushed to seal the windows with clumsy hands. A strip of newspaper. For another, only bits of adhesive paper. Nobody prepares you for this fear, for this feeling of hopelessness, for the horror of being held hostage to violence in your own home. When I began to cough, half choking and half shaking, everything became surreal, difficult to take in. I ran inside my apartment, trapped by toxic smoke. It was unbearable—the smoke was everywhere.

I had just turned 18 years old the first time I protested against Hugo Chávez’s government. I took to the streets with a banner and all the conviction I could muster. I had a real sense of purpose; I demonstrated my opinion a precise and righteous way. Curled up in my room now, trying to breathe over the foul smell and the unbearable stinging, I remember the rare courage that compelled me to go out, my sights fixed, with the unforgettable feeling that the country depended on my efforts, on my willpower, on the need to oppose this plague of authoritarianism that permeated the country’s unstable democracy. This simple, broken image makes me cry. That idea of having lost something irreplaceable.

The explosions become more frequent, closer. I listen, trying to remain calm. People hurl insults, yell in anger. The commotion on the street is followed by a long, crushing silence. The air begins to clear slightly and my skin stop burning. But I remain curled up on the floor, my hands pressed so tightly to the ground that a throbbing pain washes over them, my knuckles and wrists white. I can't stop picturing those who were fleeing. Those who cried out in fear, stifled and overwhelmed by the surge of violence, devastated by the power disguised as oppression.

Every dull, lingering, dry explosion seems to open the door to more pain, a new gateway to disaster. Fear hardens you for survival, for control. In the midst of all the confusion I ask myself how you carry on when you know, without a shadow of a doubt, that there is no escape. When, in a country destroyed by chaos, indifference and political ambition, violence is everywhere.

I try to work while the explosions continue. Even three hours later you can still hear them, the unstoppable echo of violence. The street is empty and I can't understand why the explosions were still happening, why they continued to attack when their efforts at repression have clearly been successful. But there is no answer, and I suppose there won't be one. The lingering drumbeat of bombs sound like some sort of impossibly large grapeshot, the metallic sound blending with the dry blast of the explosion. A white cloud of smoke envelops everything, the unbearable stench of violence that wafts relentlessly through the streets, drowning everything, concealing the savage and omnipresent violence.

I cannot keep trying to stay calm. I go to the window and opened the shutters. More smoke, foul and fierce, concealing what was happening down below. But I can still hear the shouting, clear as day. And suddenly, it's something more than a screech. Chants, insults. It is the clamour of rebellion, of fear and anguish. More explosions. A hazy, horrid, acidic whirlwind, everything is chaos. The silhouettes of uniformed guards appear out of the shadows. As did those of the protestors in hiding. They're trying to resist the fear, overcome this dense horror that surrounds them. I watch them flee, take cover. Their arms protecting their heads. Bodies crouched, the road blind, the void. And the violence escorts them, follows them, beats them. True, insatiable violence. Venezuelan violence.

A uniformed guard emerges from the artificial gloom. He walks down the street with his gun at his shoulder. He stops, takes in his surroundings. He bends down. I hear the explosion—direct, powerful—before I knew what is happening. Before the sound shook the windows and made me retreat. They're shooting at my building, I tell myself, as though trying to convince myself that it's actually real. It is happening. The violence is here and I can't escape it.

I run into the hallway just as another explosion goes off. Each time, closer. Danger, pure and simple. There’s no chance, I’m paralysed. The fear is like a wall, an invisible barricade. And I can’t get through. I close my eyes, as if I could escape by some simple stretch of the imagination. I stay standing, trying to contain the tears and breathe as the explosions continue. Again and again. An unstoppable succession. A painful and familiar chain. I tell myself again, the violence is here. It is so close it has stopped being just an idea. I feel the deadly, intense terror, and it leaves me weak and tired.

Suddenly the tear gas is everywhere. An immense toxic haze envelops me. I can’t breathe and my skin burns, stinging like a great open wound. Again I run, but there is nowhere else to escape to. There is nowhere where I can take shelter, where I can feel safe. At that moment, I think I'm going to die. Alone. My throat is closing up, the smell stings my nose, my lungs struggling for air. The thought terrifies me, urges me to run again. I crash into invisible furniture, collide with walls that shouldn’t be there. When I open the door I want to scream, but I can’t. I’m trapped, gripped by this nameless aggression I don’t understand.

Almost nine hours have passed since the oppression began. Night begins to fall, the foul stench of the tear gas is everywhere, penetrating everything. You can still hear the muffled echo of explosions, sometimes far away, sometimes close by. A constant and incomprehensible chain of events.

I’m still here, shaking with fear, helpless and scorched by the harsh repression, never-ending like a drizzle. I don’t let myself ask when I became a victim of my country’s violence. Or when I became an enemy of the powers that be simply for expressing my opinion. Perhaps there is no answer to my question. And that, perhaps, is the most terrifying thing.