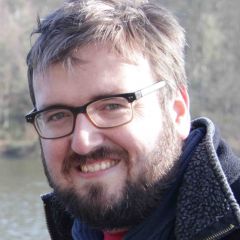 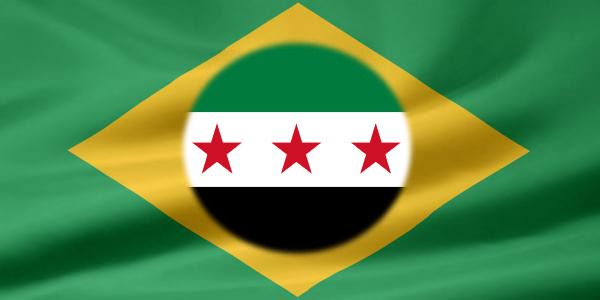 The Brazilian flag with the revolution's flag in the center. Mixed by an anonymous blogger for Global Voices.

Syrians fleeing the country's civil war are finding a place in Brazil they can call home.

Between the start of the Syrian revolution in 2011 and 2015, 3,340 Syrian nationals have applied for asylum in Brazil. Of those, 2,298 had their refugee status recognized.

Syrians make up the largest proportion of recognised refugees in Brazil which, as of April 2017, stands at 9,552 people. Most have been granted refugee status in the past five years, when the country saw a sharp increase in asylum applications — it spiked from only 966 in 2010 to more than 28,000 in 2015.

After a decline in 2016, when just over 10,000 asylum seekers applied, Brazil is seeing another surge of refugees in 2017, this time primarily by Venezuelans crossing the border to flee the economic and political crisis in their country.

Most migrants benefit from Brazil's “open door” policy: anyone who applies for asylum in Brazilian territory are eligible for documents like a social security number, passport and an employment record book, which allows them to freely reside and legally work.

For Syrians, there is an additional advantage: the National Committee for Refugees, CONARE, created in 2013 a special humanitarian visa for those escaping the Syrian conflict, which can be obtained in Brazilian embassies prior to departure. According to an LA Times report, 8,450 of such visas had been issued as of June 2016.

Indeed, to many, it is cheaper to fly to Brazil than to be smuggled into Europe, which is also notoriously dangerous.

Meanwhile, a new migration law approved in May this year will further expand the rights of refugees and migrants in Brazil. The new law, which came to replace the military dictatorship-era “Statute of the Foreigner”, will allow foreign nationals to take part in political activities, ensures easier access to paper work and regulates migrant's rights to humanitarian visas.

However, President Temer vetoed several provisions of the new law, like the general amnesty to all undocumented migrants.

Starting around 1870, Syrio-Lebanese refugees, born in the then-Ottoman territories that are now Syria and Lebanon, fled to Brazil to escape the turmoil and decay of the Ottoman Empire.

In the early 1900s, they began to open shops in São Paulo's March 25th street setting the stage for what would become one of the most iconic shopping thoroughfares in the city.

In the 1930s, the Syrio-Lebanese community was organized around cultural centers with many members associated with doctors and lawyers. These ties have continued up to the present.

An often-cited symbol of this elite status is the renowed Syrio-Lebanese Hospital (Hospital Sírio-Libanês). In 2010, Syrian president Bashar Al Assad visited the hospital during an official visit to the country and awarded its director, Dr Riad Younis, with the Syrian Order of Merit.

This allows us to view the context which recent Syrian refugees found themselves in. As they flee to Brazil, the new wave of Syrian refugees might find that the already-established Brazilians of Syrio-Lebanese descent may not all be opposed to the Assad regime.

Brazil's Socialist Party of United Workers (PSTU), a small Trotskyist party, produced a documentary about Brazilian leftwing allies of the revolution, which contrasts with other small leftists parties in Brazil that have showed support to the Assad regime.

Syrian activist Ehad al Tariri, speaking with BBC Brazil in 2012, said that around 40% of the Syrian-Lebanese community in Brasil is against Assad, but that any estimate is no more than speculation.

Lawyer Eduardo Elias, a grandchild of Syrian migrants, is a long time member of Club Homs, one of the most traditional clubs in Sao Paulo, founded in 1920. He is also the current president of the Federation of Arab Entities in São Paulo who was part of a delegation of 14 prominent Brazilians of Syrian-descent that visited Bashar Al-Assad in Damascus in September 2016, only two days after an airstrike in Aleppo hit a convoy of Red Crescent trucks carrying UN-supplied food, killing 12 aid workers.

The delegation donated seven ambulances and 150 wheelchairs to the Syrian regime, funded by contributions of Syrian-Brazilians.

Speaking to Al Jazeera in 2012, Elias described a meeting with Assad in 2010:

When Assad came here to Sao Paulo, he made a speech, and he gave us a big responsibility. He said, ‘each one of you is an ambassador to Syria, be good citizens to make Syria bigger.’ I had a private conversation with him, and it didn't seem to me that he was evil or the devil that everyone now is making him out to be.”