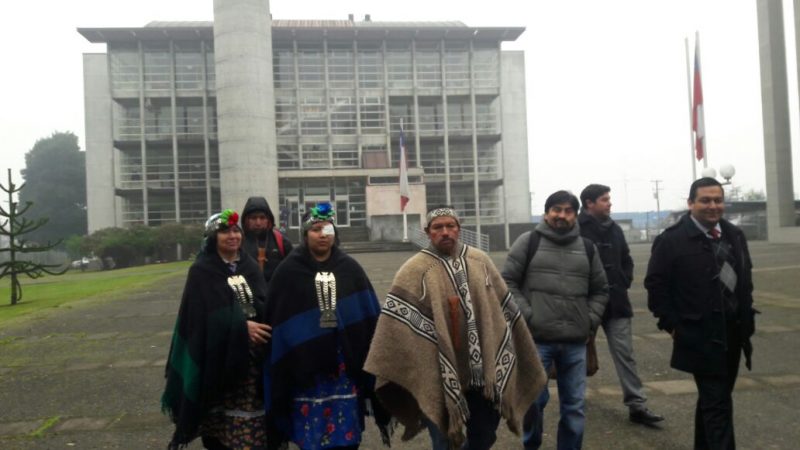 Relatives of Fabiola Antiqueo show support for the lawsuit brought up against the Carabineros (Chile's national police force). Photo used with permission.

It was about 7 a.m. on Friday, May 12, 2017, when the national police of Chile, or Carabineros, broke into a Mapuche student residence in Temuco, the capital of the Araucanía region. Roommates of 18-year-old Fabiola Antiqueo, who studies visual arts at the Catholic University of Temuco, had participated in a protest that morning to support Mapuche political prisoners [1]. After they got back home, her student residence was attacked with tear gas without warning.

Like other students in the residence, she had to dodge several tear gas bombs, but luck was not on her side. She took a direct hit in her left eye. While she bled, her companions called for an ambulance twice, but it never arrived, and she had to get a taxi to take her to the hospital. That weekend, she lost her eye. 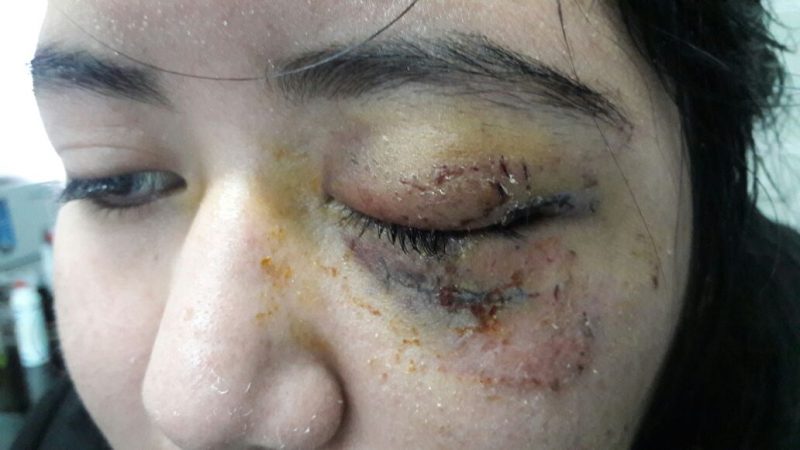 In an interview with Global Voices, Fabiola stated that:

To obtain justice, she will have to face Carabineros, one of the most powerful institutions since the dictatorship of Augusto Pinochet [2], who ruled Chile for 17 years until 1990 together with the three branches of the armed forces.

And though the incident that Friday was not like the recurring confrontations instigated by Carabineros in rural communities of Araucanía — like the one that took place this past June 14 when military vehicles barged into a school with tear gas [3] — it seems to denote a modus operandi of police forces in the region.

Even the High Commissioner of Human Rights of the United Nations, Zeid Ra'ad Al Hussein, expressed his concern this past March 29, 2017 [4] “about the reports of the use of excessive force and other abuses against indigenous group members”.

We need to make progress in overcoming the conflict between the Chilean State and the Mapuche community.

Araucanía is an important region for the country’s major timber companies, which the Mapuche community want out from their ancestral land, known as Wallmapu, in their native Mapudungún language.

The land conflict with the largest indigenous [5] group in the country has gone on over dozens of years [6] and is facing one of its worst moments. The current president, Michelle Bachelet, classified it as “errors and horrors” this past June 22 after asking for an apology and announced a new socioeconomic plan [7] to help the indigenous community.

As President of the Republic, I humbly apologize to the Mapuche people and to the victims of rural violence. We have failed as a country.

Former president and the winning candidate in Chile’s primaries this past July 2, Sebastián Piñera — who according to local media has strong links with the companies that lead the timber industry in Chile [9] — said that “we need much more than gestures” and affirmed that Bachelet “has not been capable of putting a stop to terrorism”, remarks that he has made on several occasions. (Even as the most disastrous forest fires in the history of the country at the beginning of the year [10] unfolded.)

Facing terrorism in Araucanía, the government must decide clearly and categorically which side they are on: with the terrorists or with their victims.

Also on social media, some people concluded that it was an alleged Mapuche terrorist group, which together with “ex members of Farc [sic]” [12] among others, intentionally set fire to privately-owned eucalyptus and pine plantations.

I am ashamed that a good number of Chileans, with no proofs, are blaming the fires on the Mapuche community or foreigners.

However, neither a socioeconomic plan nor a new president will be able to give Fabiola back her eye. “And I don't know whether to expect justice, because here in Chile it is difficult to find justice, above all with this topic”, explains the young visual artist.

Meanwhile, the Undersecretariat of Human Rights [14], a government body recently created in September of last year under the Ministry of Justice, is limited to promoting public policy.

In an interview with Global Voices, Lorena Fries, the body’s Undersecretary, reveals that the main complication within the legal framework to address human rights issues is that they “can't be in charge of the protection of rights, because we are, obviously, part of the government and the Executive branch.”

In her opinion, however, there have been great advances in terms of human rights since Augusto Pinochet [15] was ousted in a referendum, despite the fact that many of his laws continue to be the norm.

And although paintball munition was taken out of Carabineros’ protest control tactics after a young man lost an eye some years [16]back, Fries considers it very unlikely that the use of tear gas will be limited, despite it being classified as semi-lethal [17] and although studies point to its dangerous after effects, including miscarriages. [18]

In regard to Fabiola's case, Carabineros will begin an investigation to determine how tear gas was used and if it was in accordance with protocols. And if norms were not followed, they will be sanctioned, adds the Undersecretary.

Currently, its use is very common in the country and affects both protesters and bystanders in practically any protest, whether it has been approved or not — in Chile, people still have to obtain permission to protest.

Additionally, Chile’s Anti-Terrorism Law created in 1984 [19] to combat leftist movements that rose up against the iron fist of Pinochet — despite being modified over the years — has been invoked an innumerable amount of times in conflicts in Araucanía [20] during both of the last administrations, President Bachelet’s and presidential hopeful Piñera’s. But according to Fries, the Mapuche people are not considered terrorists.

And even though cases similar to those in the Pinochet era are still recorded, Fries does not consider it “acceptable to compare the current situation with that of the dictatorship”. And explains:

It is one thing when crimes are committed in a general and systematic context, and another when, in practice, people or public officials violate human rights, and in this case, the institutions must work.

However, Fabiola, who is still recovering, thinks that things have not changed much.

We have waited for justice for more than 10 years. It always repeats and many have died. We live with so much repression, that I don't know how to describe it.

Former United Nations Special Rapporteur on the rights to freedom of peaceful assembly and of association, Maina Kiai, reported feeling appalled at hearing atrocious cases of abuse in his Chile mission summary in September of 2015 [21]. These include cases sexual abuse, in which nobody had been prosecuted.

The current system and the impunity that it protects, is one of the most visible legacies of the dictatorship in Chile. The transition was gradual and not a radical break from the past, leaving in place marks of the past that do not belong in the Chile of today.

To date, there are many post-dictatorial cases of abuse in the country that portray a different reality that contrasts with the Undersecretary’s views. Maina Kiai detailed several [22] cases, including sexual harassment of women by Carabineros, in which they were not able to prosecute the perpetrators. 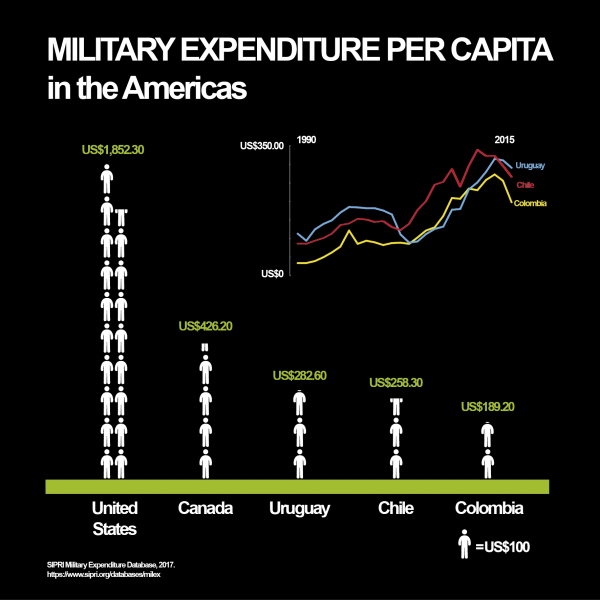 Without being at war or in an internal conflict, the Chilean military expenses per capita are higher than Colombia in recent times and ranked third just after the United States and Canada for many years in the last decade. The annual budget of Carabineros in 2016 at CLP 988,828,000,000 (aprox. USD$1,500 millon) [23] is almost the same as the amount for the Army, Navy, and Air Force combined, or the entire Ministry of Justice. (Design: Ricardo Martínez)

In an interview with Global Voices, Jonathan Hidalgo and Sebastián Painemal, Fabiola's lawyers, say that the District Attorney of Araucanía [24] has processed the requested proceedings for their report “satisfactorily” and that they are part of an investigation that is being led together with the Investigations Police. “Only two reports are needed: an expert report and some witness testimonies”. The crimes that are being sought are for “serious to very serious injuries”.

Similarly, the National Institute of Human Rights [25] (INDH) which has the capability of filing complaints directly against Carabineros, applied appropriate human rights protocols right after the incident.

But the lawyer for the INDH headquarters in Araucanía, Marcos Rabanal, explains in an interview with Global Voices, that despite the unobstructed actions of the public prosecutor, “a high-ranking Carabineros official in Araucanía hinted at a worrying theory about the case in front of the media: Fabiola's injury could have come from her own companions that had participated in the protest.”

Rabanal affirms that greater urgency is needed for these type of investigations and that there should be a stronger commitment to accuse Carabineros officials of crimes. And though he celebrates how the proceedings have been taken care of to date, he considers that it is necessary to stay on top of Fabiola's case. His experience with previous cases in the region has demonstrated that speed does not guarantee that the accused will be charged.

We have the case of Brandon Hernández Huentecol [26], who was seriously injured in December 2016 from an anti-riot shotgun [27] and was about to lose his life. The proceedings were done quickly, but as of now, the investigation has not been formalized despite the identity of the official being established since the beginning. Dealing with police officials, we believe that it takes too long when comparing crimes that accuse indigenous or Mapuche people.

We can't remove pressure from Fabiola's case. While we have not determined responsibilities, this is not finished. We hope that [Fabiola's case] quickly becomes a concrete charge against specific officials and is not diluted over time.

The INDH lawyer states that, while the investigation is not formalized, the victim has no rights to assert, and the crime remains unpunished. And even if this important step has been achieved, other questions open up before obtaining definite justice.

And although Fabiola is not a lawyer, her point of view is the same as Rabanal.

We would like to catch the person that shot me. Though obviously the institution [Carabineros] is going to cover it up, I know that they will know who the person was. But I am not going to wait for them to fire him, because here in Chile it seems that they give a medal to each carabinero that kills someone. They protect them.

For Rabanal, there is a need to assign special prosecutors within the Public Ministry solely for these types of cases because conflicts of interest have already occurred when investigating Carabineros. He also reveals that there is “an excess of caution or fear” when judging the police institution.

Until a few years ago, the jurisdiction for judging a carabinero in a case like Fabiola's was under total control of the Military Court [28]s. Though in theory it’s now a thing of the past, the dictatorship legacy seems to continue blocking judicial processes in practice.

For Fabiola, though, her priority is to go back to get her Visual Arts degree.

I prefer to concern myself with university more than that. And to be calm. I have to take the baton as a person, artist, and victim. It is a moment to make people aware.

And though she feels supported by her whole family, companions and friends, Fabiola does not know what will become of her assailant. “I can't wait for justice, because I know that it's not going to come”. 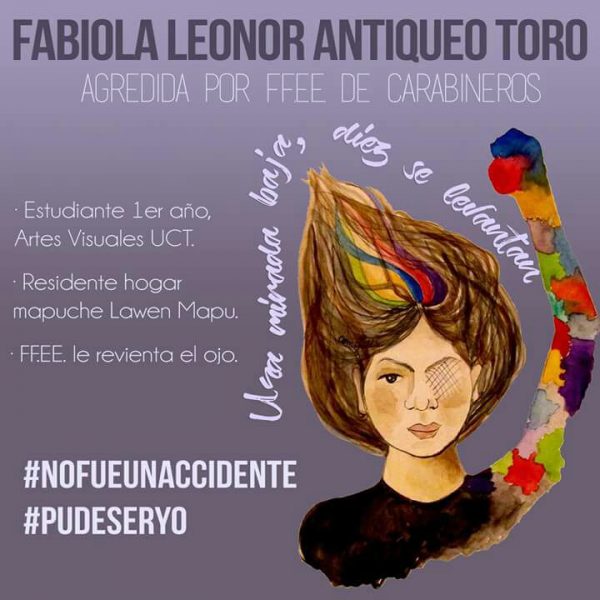 Poster of the campaign that seeks justice for Fabiola Antiqueo. Shared on social networks.

After various attempts, no representative of the Carabineros could be found to comment. The institution ordered an “internal summary” to meet their responsibility, that according to Fabiola's lawyers, should agree with the investigation of the prosecution.