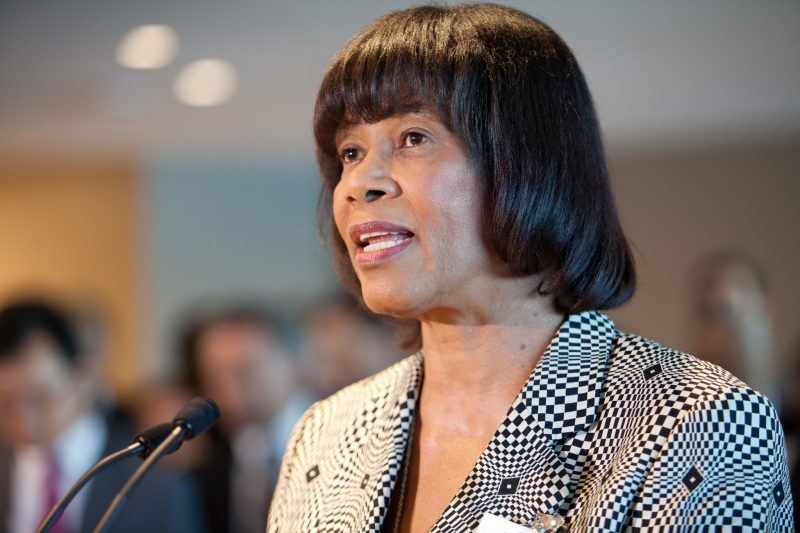 On June 29, 2017, Jamaica's first female prime minister, Portia Simpson-Miller [2], made her final speech [3] in parliament. It marked, at the age of 72, her retirement from representational politics.

Simpson-Miller had been under some pressure to step down [4] as opposition leader ever since the People's National Party (PNP) [5], under her leadership, lost the general elections in February 2016. Former finance minister, Peter Phillips, was returned unopposed as party leader, and sworn in [6] as opposition leader on April 3, 2017.

Ms. Simpson Miller was showered with tributes [7] by colleagues on both sides of the house in a joint sitting of parliament on June 27, where she was described as a champion of the poor [8]. With rural roots, her political journey as a woman and her personal resilience in the face of stiff challenges were often topics of praise and admiration. However, her leadership skills were often called into question [8] during her two stints as prime minister, and as she left the political stage she still had her detractors [9].

Hearing people lament Portia's departure is like seeing people congratulate my rapist for being a ‘good man'…she isn't a good person. SHE knows that. Besides unqualified AND an embarrassing representation who wasn't even of average intelligence as per her public displays, she was also an awful apathetic human who perfected the art of pandering to the hypocrisy of Jamaicans. I'm happy to see her back. I'm not alone. Good riddance.

Stephens responded to the many Jamaicans who were disturbed by her outburst by simply stating [11]:

That it takes ‘audacity’ to criticize a PUBLIC SERVANT is a tragedy.

As a quite unpleasant war of words ensued, community activist Damien Williams shared [12]:

To compare the fanfare & well wishes towards PSM [Portia Simpson-Miller] to that being offered to a rapist is NOT a critique of her capacity, competence or a commentary on her failures but NASTY personal attack, plain and simple. However, to offer a defense of PSM by doing same is equally nasty. Rape is NEVER something you downplay or use to inflict pain/recompense. We certainly can express dissent without ad hominem. We are always so grotesquely excessive and then use as a crutch, freedom of speech. KMT [Kiss my teeth [13]]

Affectionately known as “Mama P,” Simpson-Miller presided over the gritty “garrison” constituency of South West St. Andrew for over four decades. It is an inner city area of the capital, plagued with poor infrastructure, unemployment and poverty. Columnist Martin Henry wrote [14]:

Portia Simpson came to representational politics at the parliamentary level in 1976 when political tribalism and its ugly pickney, political violence, were on the upswing. The state of emergency declared by the Government that year, partly in response to escalating violence associated with the election campaign, assisted the young KSAC councillor to capture what up till then was a safe JLP seat, having never been won before by the PNP since its creation in 1959. Her 76 per cent margin of victory in '76 just kept growing to the point where it equalled the number of voters, even when a few voted for the JLP candidate.

Within a week or two of Simpson-Miller's resignation as a member of parliament, the party became gradually embroiled in a political tussle over her possible successor in the constituency. This was reported and commented on in detail by both traditional and social media. Jamaicans have a taste for political intrigue, and many (especially those with party affiliations) are following every twist and turn with interest.

The story began with a drama — and a murder — when local Councillor Karl Blake (considered a possible successor) was injured and his assistant shot dead [15]at their constituency office. Blake, who has recovered, is reportedly no longer interested [16] in contesting the seat.

While Councillor Audrey Smith-Facey [17], who is campaigning under the hashtag #OurAudrey, was expected to be the main contender, the waters were muddied considerably when a video was posted [18] of Simpson Miller endorsing former Kingston mayor, Councillor Angela Brown-Burke [19], to succeed her. This was a surprise to many, with some questioning whether it was genuine, having come after the nomination period had ended; this threw the party into further confusion.

According to one news report, however, party delegates are firmly rejecting Brown-Burke. Many would like to see the young maverick, Damion Crawford, in the seat. Crawford is apparently not interested, but this has not stopped him from seeing the humour in the situation (he locked horns with Brown Burke [20] on social media in 2015):

I don't understand y ppl upset when I nvr ever said I was running https://t.co/DruHfGwkkQ [26]

In moments like these i wish my name wasn't damion crawford it's too easy to call. I'm changing it again to Venkatanarasimharajuvaripeta”

Meanwhile, some journalists are enjoying the cut and thrust within the party:

#OurAudrey shows no sign of backing down, issuing a somewhat sarcastic statement that she expects to be the “standard bearer”. One Jamaican Twitter user was amused:

Not to be outdone, Councillor Brown-Burke is busy campaigning on her Facebook page, with a photo [36] of herself and “her people” in the constituency. She also wasted no time in updating the cover photo [37] on her Facebook page to read, “I'm thankful for my struggle, because without it I wouldn't have stumbled across my strength!”

After a meeting of the party's executive council, the PNP has now agreed to hold a selection conference [38] to decide between the two women on July 30, 2017.

The question remains, though: does Portia Simpson-Miller want to remain engaged with the people of South West St. Andrew, whom she described in her farewell speech as her “armour of steel”? Perhaps that depends on which woman succeeds her.