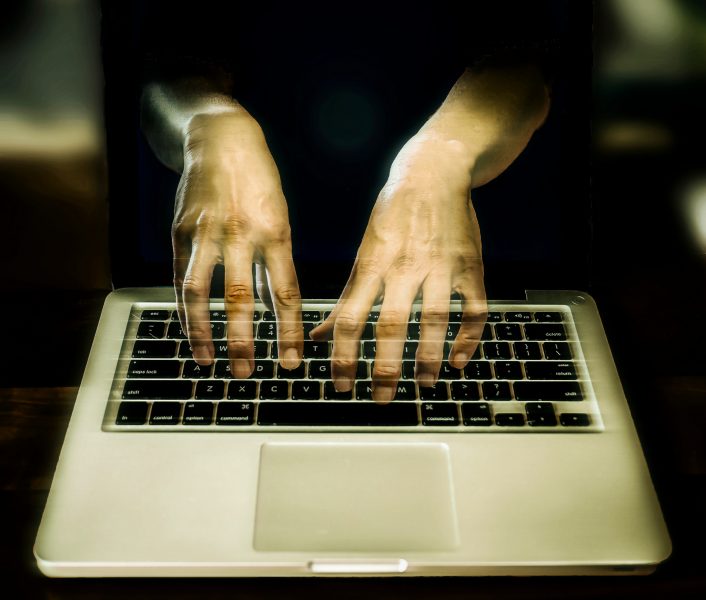 Computer Data Hacker image by Blogtrepreneur, CC BY 2.0. Check out their page at: howtostartablogonline.net

A gruesome double murder took place on June 28 in Trinidad, in which a 13-year-old boy and his babysitter were found with their throats slit.

Police initially treated the incident as a robbery gone bad, but subsequently charged the sitter's brother and an accomplice for the murders.

The time in between the discovery of the bodies and the arrests was a distressing one, with many social media users lamenting the escalation of violent crime in the country and venting their frustration at the apparent impotence of the government and protective services to make a dent in it.

But one Facebook user, Rayad Mohammed, took things to another level when he suggested that someone should rape and slit the throats of the family of Prime Minister Keith Rowley.

Mohammed issued an apology, but was ultimately charged with “inciting violence” under the Summary Offences Act, of which Chap. 11:02 Section 105 deals with contentious “publications”. The charge attracts a fine of TT $1,000 (approximately US $148) or six months’ imprisonment.

The case raised critical questions for many citizens about the degree to which the comment was in fact inciting violence.

The local blogosphere was immediately separated into two camps — those who thought Mohammed deserved to be charged for his reckless post, and those who felt that charging him with an offence was overly harsh.

Facebook user Keith Francis rejected outright Mohammed's explanation that he was simply trying to express his anguish over the murders, saying:

I didn't know yuh does rise up against what going on in the country by advocating violent crime. Miss me wid dat shit.

A woman on television declares that ‘he's being punished for what is going on in society’. Seriously? That's his defence? So, if some crazy had followed through, their defence would be, ‘that guy on FB made me do it'?

Barrister and lecturer Dr. Emir Crowne, explained the original intention of the clause under which Rayad Mohammed was charged:

The provision was enacted in 1951….to deal with the “misuse of telephone facilities and false telegrams.” The legislature at the time sought to capture offensive messages that may have been transmitted by landlines and telegrams.

It is a stretch, a painful one at that, to suggest that online activities are caught by this section—even if those activities are facilitated through one’s mobile phone. […]

To be successfully prosecuted under the Criminal Law, there must be a statutory wrong. In the absence of clear statutory language, there can be no criminal wrongdoing. […]

Indeed, if so-called cybercrimes were caught under this section—and others—there would be no reason for specific cybercrime legislation in the first place.

Attorney Daniel Khan posted a video to his Facebook page In the Pursuit of Justice DK, in which he asserted his position that the comment was “was not a threat, it was not inciting, it was not sedition.”

He argued that Mohammed's arrest should have all netizens concerned:

That Facebook post was disgusting. It was obscene, it was profane, and there's no defending that. […] But let's put emotions aside: that person committed no offence….He has been taken into custody and not released until three days later because his lawyer filed an application to court — and that is the scary thing. There are markers in society where we could say on this date, society went in this direction [….] we may be moving into [an] oppressive and dictatorship society and there'll be no turning back.

Khan even suggested that “people over 40″ may not understand the internet and social media, and advised that the government and police service “get out of Facebook”.

Mohammed, he insisted, was simply expressing his frustration:

He was fed up with crime….[expressing concern that] those that have the authority….to address the crime situation perhaps do not feel such an urgency because they are surrounded by security where crime may not affect them.

Khan believed that Mohammed's arrest infringed upon his individual right to express criticism of the government.

That freedom to criticise is what many are concerned about when it comes to Trinidad and Tobago's draft cybercrime legislation.

In a preliminary response to Rayad Mohammed's comment, the national attorney general (AG) publicly suggested that Mohammed could be charged under the country's cybercrime legislation.

What the AG might not have made clear in his statement, however, is that this legislation is currently in draft form and has not yet been approved or enacted. In fact, the government recently invited commentary on the latest draft.

In the current draft, Section 18 (1) of the Cybercrime Bill 2017 criminalises anyone who “uses a computer system to communicate with the intention to cause harm [i.e. emotional distress] to another person”.

Factors such as anonymity, “the extremity of the language”, the reach of the communication, its context and veracity would all be taken into consideration, but the offender could be subject to fines of up to TT $250,000 (US $36,904), as well as five years in jail.

Some Facebook users have interpreted parts of the bill as an attempt by the government to control the internet.

Tech blogger KnowProSE.com liked “the spirit of the [cybercrime] bill”, but had recommendations to improve it, including technology education for the police and the legal profession, the need for criminal intent to be established if laying charges, the need for independent audits, the protection of individuals’ privacy, and the importance of having different criteria for first time as opposed to repeat offenders.

Journalist Mark Lyndersay shared his concerns about the bill's potential impact on his profession, explaining:

The 2017 edition of the bill tidies some issues, but leaves others in place in a way that’s clearly intended to punish without overdue attention to the consequences for communicators and activists…

Overbroad content offences are always illegitimate, but are particularly dangerous online, where many people are still in the process of discovering their voice. The Bill, if passed in its current form, could have a substantial chilling effect on online speech in Trinidad and Tobago.

The twin island republic is not the only regional territory to wrestle with cybercrime legislation. In a recent case in Jamaica, authorities sought to convict a women's rights activist under that country's Cybercrimes Act for “use of a computer for malicious communication” as part of a campaign against gender-based violence. Charges against activist Latoya Nugent were dropped after the Director of Public Prosecutions (DPP) deemed that it was “not a viable prosecution”.

That dangerous potential for censorship and abuse, many feel, outweighs the outrage that a poorly expressed rant like Mohammed's can generate.

Dr. Emir Crowne, who wrote a post for Wired868 about the problematic aspects of the Cybercrime Bill, summarised the issues this way:

The Bill is an ongoing recognition of the need to protect the citizenry against cybercrimes. In many ways, it is a paradigm shift in the way criminality is traditionally viewed.

However, in addressing this new avenue for criminality, care must be taken to draft legislation that is precise, impairs constitutional rights as least as possible, and sets out clear defences and exceptions, especially where personal liberty is at stake.