With China Now the Top Market for Initial Public Offerings, One Economist Fears for Ordinary Investors 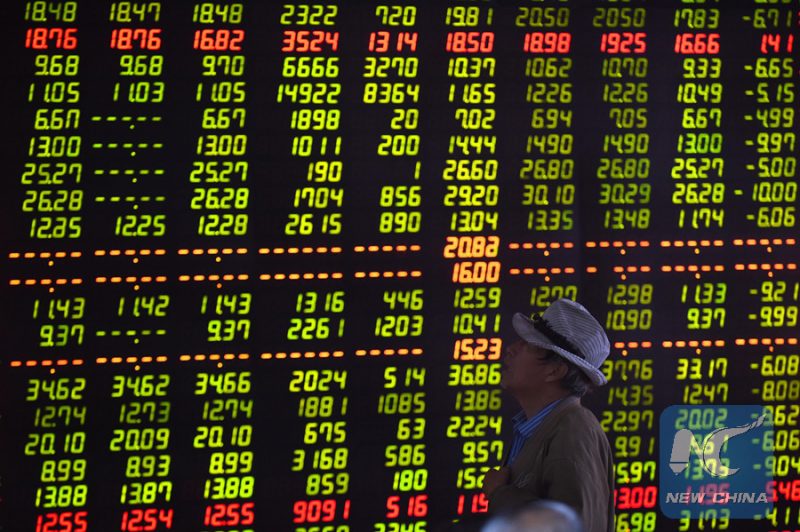 China's stock market had one of its biggest crashes in 2015. Image from state-owned Xinhua.

China has overtaken Hong Kong as the top initial public offering (IPO) market. The number of listings in China's stock exchanges has surged 303 percent, with 246 companies raising up to US$18 billion in the first half of 2017.

Good news? Not according to Han Zhiguo, a renowned Chinese economist, who wrote a long post on popular social media platform Weibo slamming China Securities Regulatory Commission (CSRC) for its poor regulation of the market. Small investors, he warned, will be the ones to suffer the consequences:

China Securities Regulatory Commission has gone too far on IPOs: The US stock market adopts a registered system for IPOs with 150 IPO listings last year. China adopts an approval system with 500 listings in the same period. As an open market, the IPO funding from US equities account for 23.2% of the global funding in the first half of the year, the second largest, while the IPO funding from Chinese equities, a closed market, accounts for 28.8% of the global funding, climbing to number one.

The economist pointed out that in the US the stock market has a transparent monitoring system that compels companies to disclose their business information, there are harsh penalties for business fraud, it operates in a free market and that market is currently on the rise. China does not have an open and transparent monitoring system in place and the market is full of fraud. Moreover, investors’ decisions are not based on free market information but political speculation. Currently, the Chinese stock market is very fragile after a series of crashes in the past two years.

The 2015 stock crash wiped out trillions of yuan from the portfolios of small investors, who included tens of millions of ordinary workers, farmers, housewives and pensioners. At that time, price-to-earnings (PE) ratios for Chinese stocks averaged an astonishing 70, against a worldwide average of 18.5, and the value of the A-shares inside China grew to be nearly double the equivalent shares of the same companies on Hong Kong's exchange.

However, the regulators have apparently not learned their lesson. Han alerted that the IPO listing frenzy is another huge trap for small investors:

The surge of IPOs without a regulatory system that punishes business fraud, de-lists the poorly performing companies and protects investors’ rights has filled the market with garbage, and expanding the garbage market would create a huge “quake lake” that eventually buries everything and crashes the market as well as the small investors. In the first quarter of 2017, 34 newly listed companies have recorded deficits in their businesses and 25% of the newly listed stocks have seen a decline in their business performance. It reflects the scale of fraud in IPOs.

Most of the comments echoed Han's analysis and proposal for setting up an open and transparent market monitoring system, but some were skeptical given China's current political environment. For example, two of the comments in the thread read:

To be honest, the Chinese stock market has become the tool of the state to make money.

Such a poor impression of China's stock exchanges has been fed by a number of cases of business fraud and misconduct involving CSRC's management.

For example, Yabaite, a listed building material company, was exposed by Chinese state television recently for faking overseas deals and cooking its books, but the cap fine imposed by CSRC was just 600,000 yuan — compare that with its 7-billion-yuan market value.

Lv Yongxiang, the president of Yongda, a Shenzhen-listed electronic switch company, and his family members cashed out all their stocks of about 6.8 billion yuan in the bull market of 2015 and resigned from all company positions.

Feng Xiaoshu, a former member of the Public Offering Review Committee in CSRC, gained nearly 250 million yuan by investing 3 million into a company just before its listing. Feng has been under investigation since April for insider trading.

Other senior officials of the commission including Assistant Chairman Zhang Yujun and Deputy Chairman Yao Gang have been investigated amid a financial anti-graft campaign following the 2015 stock market crash.

In response to Han's criticism, four of finance newspapers — China Securities Journal, Shanghai Securities Journal, Securities Times and Securities Daily, which are designated by the CSRC for publishing its announcements and listing companies’ required disclosures — argued that CSRC should not slow down IPO listings as small- and medium-sized businesses need capital investment for further development.

Han fought back on Weibo, criticizing the papers for protecting the financial sector's interest rather than the public interest. This post was deleted soon after it appeared on highly censored Weibo. He urged his followers to copy his views and spread it via other social media outlets: