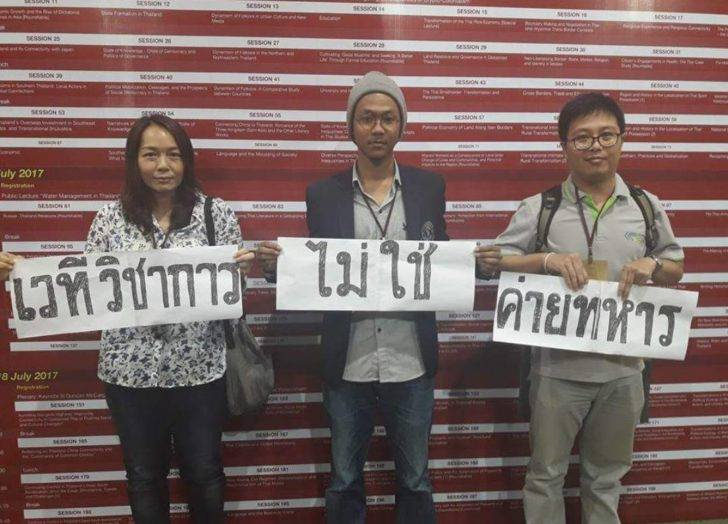 Pakawadee Weerapaspong (left) and Chaipong Samnieng (right) holding up placards reading ‘An academic forum – is not – a military camp’. The man in the middle has not yet been identified. Photo from Thai Academic Network for Civil Rights.

The deputy governor of the northern province of Chiang Mai has threatened three academics in Thailand who allegedly put up banners against the junta.

On 18 July 2017, Deputy Governor Puttipong Sirimart submitted a letter to the Ministry of Interior reporting three academics who allegedly held up placards reading, “An academic forum is not a military camp”, at the 13th International Conference on Thai Studies in Chiang Mai.

The letter identified the three as Prajak Kongkirati, a political scientist from Thammasat University, Pakawadee Weerapaspong, an independent writer, activist, and translator, and Chaipong Samnieng, a lecturer at the Department of Sociology and Anthropology, Chiang Mai University.

The letter states that the three will be summoned by the military in Chiang Mai, claiming they used an academic forum to engage in anti-junta activities. The letter, however, does not specify when the three should report to the authorities.

The three are among 176 academics who signed a joint statement at the forum calling for the return of democracy. Here's an excerpt of the statement:

The state must respect academic freedom by returning the space of knowledge in which the people can access different kinds of information and facts, as well as allowing the exchange of knowledge without suppression, control or distortion.

Thailand's army staged a coup in 2014 and has remained in power through a constitution it passed in 2016. It vows to restore elections and civilian rule after political reforms have been implemented.

The deputy governor's letter adds that the three have consistently been involved in movements against the junta through the Thai Academic Network for Civil Rights (TANCR).

In response, the TANCR issued a statement saying that Prajak Kongkirati, although named in the letter, was not involved in holding up the placards and that the group has always called for freedom and human rights.

The statement condemned the measure to summon the three as “shameful”, adding that the 2017 Constitution does not forbid people from holding up placards. 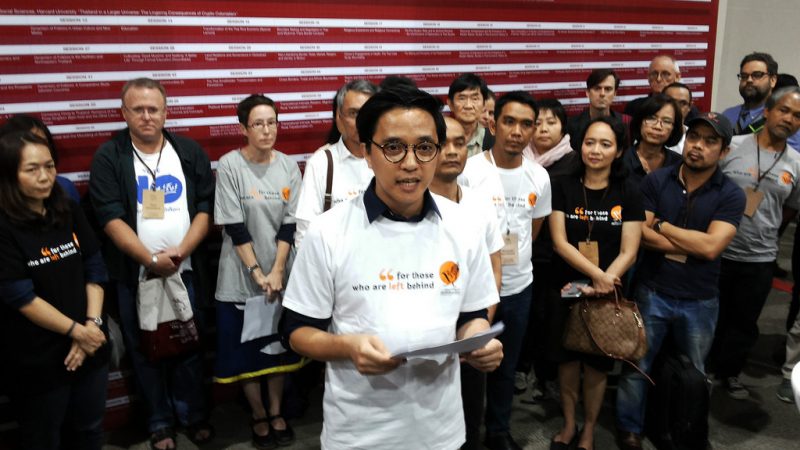