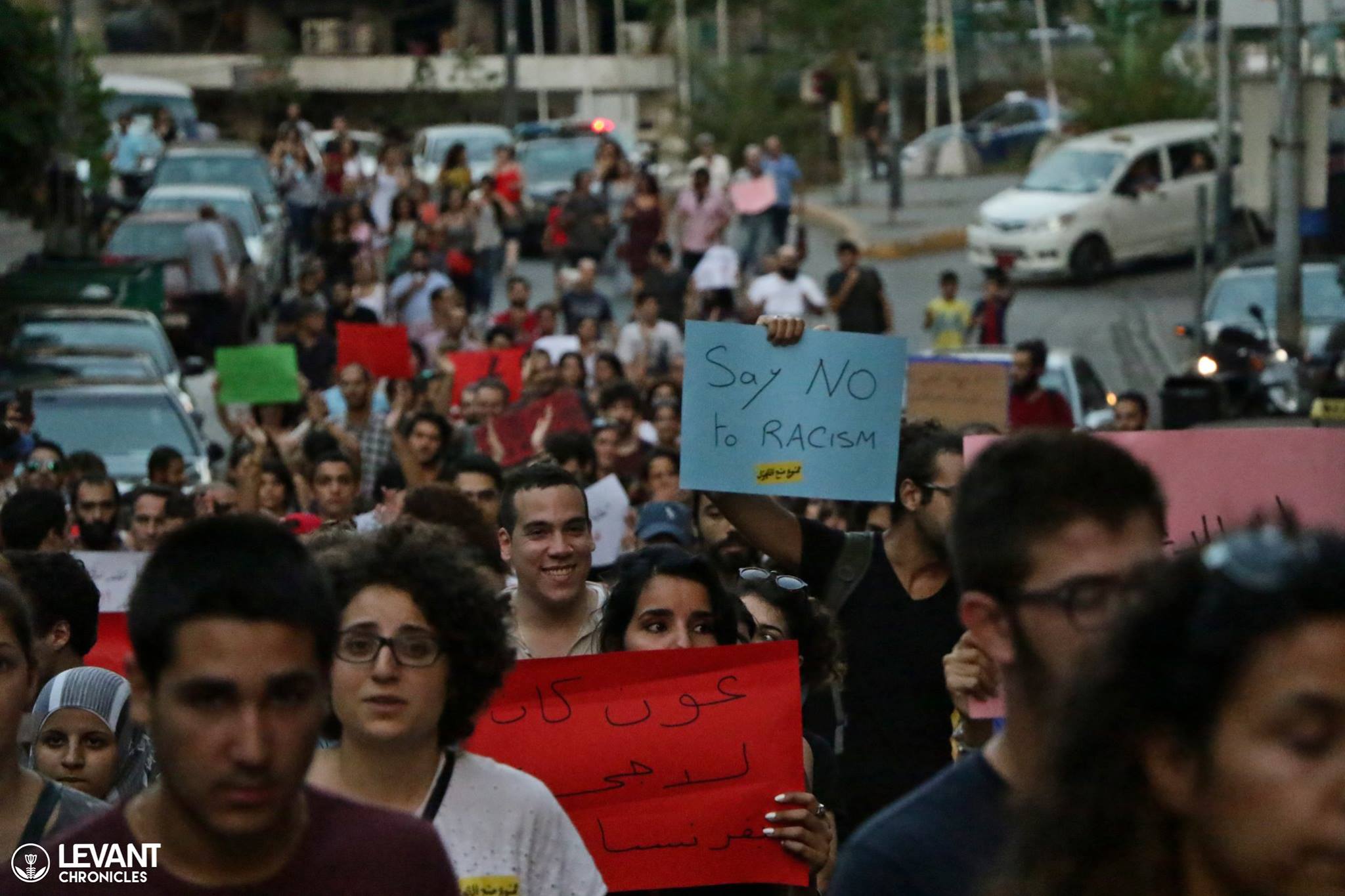 A march in Lebanon, July 2016, against racism and curfews faced by Syrian refugees. Photo: Levant Chronicles on Facebook

The Lebanese government banned all protests around the same time activists were forced to cancel [1]a sit-in—in support of Syrian refugees—due to online threats.

It is unclear if the two events are connected. The sit-in was scheduled to take place on 18 July in the capital Beirut.

In a clear violation of the right to assembly and protest, on 16 July, the Lebanese government announced a ban on all protests. Minister of Interior Nohad Machnouk tweeted [2]that any requests to protest will be denied:

after discussing [recent developments] with the concerned security forces, we decided to decline any requests, from anyone, to hold a protest, in order to preserve security and civil peace.

Before the ban, the activists who were planning to protest the mistreatment of Syrian refugees faced numerous attacks and threats from Lebanese commentators and politicians, prompting the organizers to cancel the sit-in. The activists were accused of “inciting ” against the Lebanese army and of supporting ISIS.

The Socialist Forum, a leftist political group in Lebanon, organized the sit-in event, in solidarity with Lebanon's 1.5 million Syrian refugees, following a military operation [8] on June 30 in “search for terrorists, weapons and explosives” in two refugee camps in the town of Arsal.

The raid led to the arrest of more than 350 Syrians. Four of the arrested refugees died while in custody, the Lebanese army announced on 4 July. They blamed [9]their deaths on “health complications” and hot weather. But the news website Middle East Eye obtained pictures showing [10] “huge gashes and bruising on the bodies of three of the four men.” The detainees’ deaths have raised questions about the conditions of their detentions, particularly as pictures showing signs of mistreatment and bruises on the victims’ bodies began to circulate online.

Right before the ban, the threats against the Socialist Forum grew, when the names of three of its activists, who submitted a request for a protest permit to the Beirut municipality, were spread on social media with their telephone numbers and pictures.

Joseph Abu Fadel, a Lebanese political analyst and lawyer, posted a threatening tweet [11] on 15 July in which he referred to the protest as one against the “champion Lebanese army by adulterers of Daesh” and threatened that the planned site for the protest would become “their cemetery.” Daesh is how the Arabic-speaking world refers to ISIS.

Abu Fadel has approximately 30,000 Twitter followers, and the tweet was retweeted more than 250 times at the time of writing.

Wiam Wahhab, a former minister of environment and the leader of the nationalist party, the Lebanese Unification Movement, called [12] on the Ministry of Interior (in a tweet) to cancel the protest.

He also called [13] for a counter-protest the same day in support of the Lebanese army and against Daesh. Wahhab's party is in the 8 March political alliance, which also includes the militant group Hezbollah, which intervened in Syria since 2013 to support the regime of Bashar al-Assad. In a third tweet, he added that if the Lebanese state cannot prevent the protest, people will.

If the state does not ban the protest against the Lebanese army, many Lebanese [political] forces will take care of it and the protest will be banned

A video [15] posted on Facebook [warning: violent content] shows several men, one of them armed with a rifle, questioning a man who they identify as being Syrian about whether he will join the sit-in. The harassers, after asking the man for his papers, slap and kick him on the ground. They accuse him of being a member of Daesh and order him to repeat:

On the Wednesday 19th of July, Interior Minister Machnouk tweeted [16]that the police had arrested the harassers.

In their 16 July statement [1] announcing their decision to cancel the sit-in, the Socialist Forum condemned the Beirut municipality for the leak. The  group also clarified [1] the purpose of the protest:

The goal was to strengthen or restore relations between Lebanese and Syrians, hoping to counter the discourse of hatred and racism.

The group further denied accusations that it is inciting against the Lebanese army, and called on authorities to investigate the deaths of the four detainees.

Contrary to what is being said by some officials and others on social media platforms, we would like to clarify that the Socialist Forum does not cause incitement against the Lebanese Army, as per its statement on July 13, 2017, which calls for:

1. A transparent and independent investigation to uncover all the causes of the suspects’ deaths.
2. The strict public accountability for all those involved in torture, murder, and other forms of abuse.
3. The revealing of the remaining arbitrary detainees, their release and compensation.
4. The end of the exploitation of the refugee issue for political manipulation, and to stop treating it as a security threat.
5. The abolishing of all racist decisions against refugees, and the end of practices that forces them to return against their will to brutal killings and massacres, as the regional and international community remains suspiciously and criminally silent.

In addition to the threats they faced online, Lebanese activists standing in solidarity with Syrian refugees were also subjected to harassment from the authorities.

Fidaa Itani, a journalist who criticized the Lebanese army, Lebanese president Michel Aoun and foreign affairs minister Gebran Bassil in a Facebook post, about the raids on the refugees camps in Arsal and the mistreatment of Syrian refugees, was detained for one night [17] and questioned by the Internal Security Forces cybercrime bureau. He was released [18] on 11 July only after he deleted the post. In another case of harassment, the army seized medical samples [19] collected by Lebanese lawyer Diala Chehade from the bodies of the victims, obstructing any civil investigations into the matter.

The government has not specified the duration of the ban on protesting. But Moulahazat, a blog that analyzes Lebanese politics, believes [20] the reason behind this ban is to avoid any protests during parliamentary talks about tax hikes, which are often met with big protests [21] in Lebanon:

The Lebanese government allowed two rival protests regarding refugees and the army to take place, and then banned all protests after an impression was given that the protesters were going to clash.

You all took the bait: A tax hike parliamentary session is taking place on Tuesday, and the ruling class just directly used the refugees issue to make things easier for them in parliament without you even noticing.
Lebanese Politicians 1 – Panicking Lebanese 0
Welcome to elections season, Lebanon.