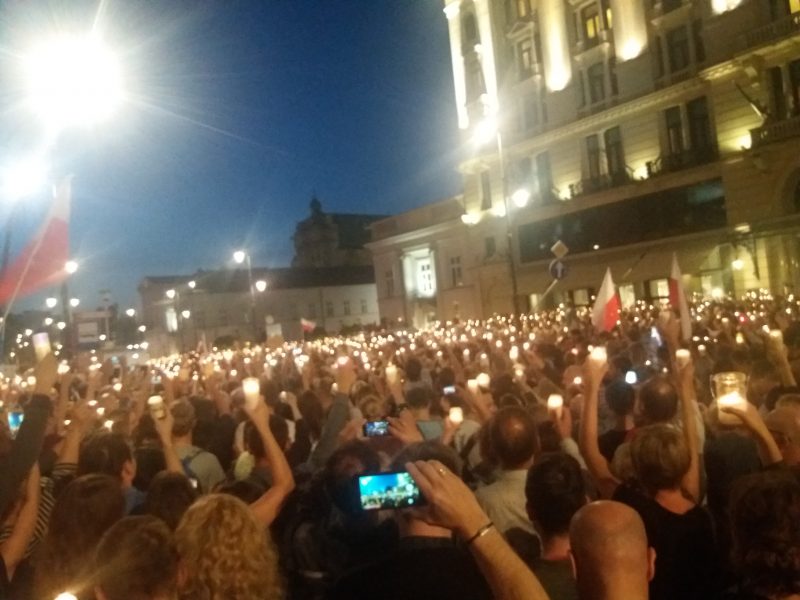 Residents of Warsaw gathered in front of the Presidential Palace. Photo by Anna Gotowska, CC-BY.

2017 marks a century since the establishment of the Polish Supreme Court, but instead of celebrating, Poles are taking to the streets in defense of the country's independent judiciary.

The ruling Law and Justice (PiS) party, which has held power for a year and a half, has in rapid succession taken over the public prosecution authority, the Constitutional Tribunal and — on July 12, 2017 — the National Council of Judiciary, which appoints and promotes judges.

And now the ruling party has its eyes on the Supreme Court. A set of legislative changes, introduced last week and voted to a parliamentary committee on July 18, provides for an on-the-spot purge of the entire cadre of Poland’s highest appellate panel, which consists of 83 top judges. The dismissals would take place one day after the law’s promulgation. The only exceptions are to be made by the minister of justice, also a member of Law and Justice. The aforementioned National Council of Judiciary, under the influence of the party, will then fill the empty seats.

The revamped Supreme Court would have final appeal powers over all civil and criminal cases. The bill also provides for the establishment of the new Disciplinary Chamber within the Supreme Court, which will make final determinations on disciplinary actions against all judges in the country.

In a surprise move on July 18, as the bill was being debated, President Andrzej Duda, a former member of Law and Justice party, announced he will not sign the bill regulating the Supreme Court until his new amendments to the National Council of Judiciary bill passed the week before were incorporated. These amendments provide that the members of the council are to be elected by a three-fifths parliamentary majority, instead of the ordinary majority suggested by the original bill, making it much harder for Law and Justice representatives to elect their candidates. However, many consider the new law to be unconstitutional and argue that the president's proposal, if adopted, wouldn't change that fact.

In response, the residents of Warsaw and other major Polish cities took to the streets urging the president to veto the bill entirely. The gatherings were a continuation of demonstrations that began over the weekend and grew more massive on the day the parliament was debating the controversial bill.

The protests were organized by Polish Judges Association “Iustitia” and Akcja Demokracja (Action Democracy) in 33 cities across Poland.

The video below, taken by the author on July 18, shows participants in Warsaw singing the Polish national anthem:


And in this footage, residents of Warsaw shout, “We want the veto! Free judiciary!”

Warsaw rally for #democracy and #ruleoflaw in #Poland continues… Candles symbolise hope for freedom and a better future. pic.twitter.com/QizU5OCZdp

A heated discussion in the Parliament lasted almost until midnight, with the opposing minority trying to stop the Supreme Court bill from being passed. The final vote is expected to take place on July 19.