Lost in Translation in Central Asia: Keep it in the Family 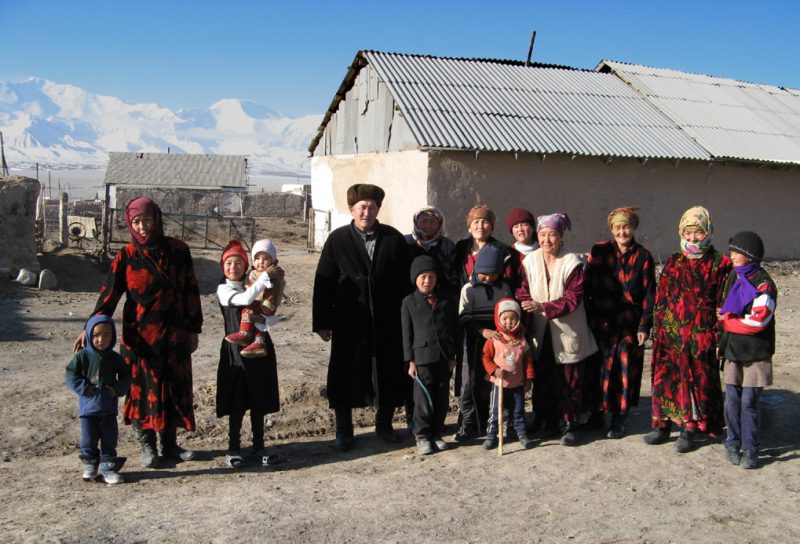 A Kyrgyz family in the village of Sary-Mogol, Osh province. Photo by Betta27. Image for illustration purposes only. Creative commons.

In the HBO hit serial The Sopranos, lead character Tony Soprano tells his son, AJ: “In the end your friends will always let you down. Family: they're the only ones you can depend on.” This is a sentiment that many Kyrgyz would appreciate.

The Kyrgyz word tuuganchylyk consists of two parts. ‘Tuugan’ translates as a relative, or kin, while ‘chylyk’ is a suffix used to express the essence of a certain quality. Hence, tuuganchylyk is a word that signifies the primacy of family and kinship.

Listen to a native Kyrgyz speaker say, “You should adhere to tuuganchylyk because regardless of what situation you are in your kins will always be there for you”:

A strength and a weakness

Tuuganchylyk is the core idea behind the familial support networks which have helped Kyrgyzstan wade through more than a quarter of a century of economic struggle following the collapse of the Soviet Union. Yet it is also a debilitating disease that gnaws away at the country's body politic.

Reflective of the centrality of tuuganchylyk to Kyrgyz people is the fact that the Kyrgyz language has specially designated words for each extended family member. For example, the ‘younger sister of your husband’ is a kainsingdi, while the ‘younger sister of your wife’ is a baldyz. In English, both words would be translated simply as ‘sister-in-law’. 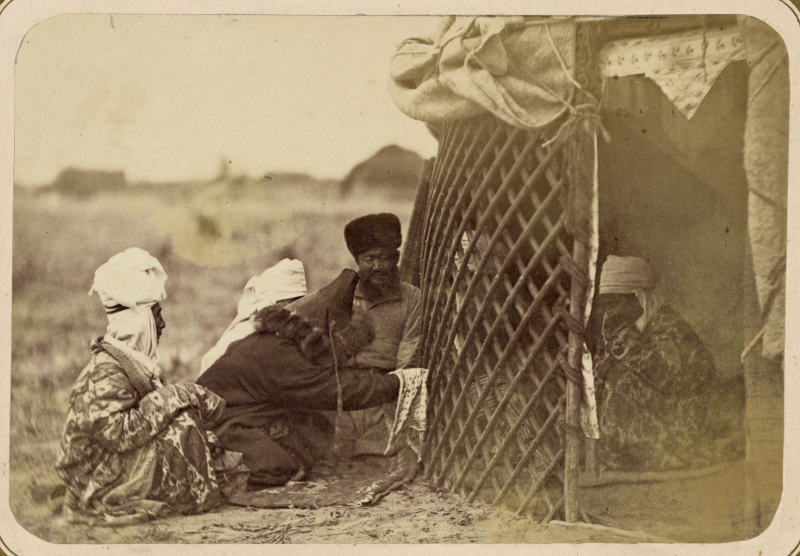 Scenes from a Kyrgyz wedding. Photo taken by Aleksandr Kun some time in the 1860s. Creative commons.

The boundaries of tuuganchylyk, i.e., the people a Kyrgyz person includes in his or her conception of family, can vary depending on the context. In everyday life, you give first preference to your immediate family members, then to your paternal cousins. After your paternal cousins come the great grandchildren of your paternal great grandfather; your second cousins on your father's side. But tuuganchylyk can be expanded to include more than one tribe or region if the context is important enough.

Every traditional Kyrgyz, especially men, should know their forefathers up to at least seven generations. This means that family trees often appear to sprawl towards infinity. One local joke runs that Hitler once ordered a Kyrgyz man shot dead without questioning. Had he questioned him, Hitler suspected, the Kyrgyz would have shown him proof that they were somehow related. 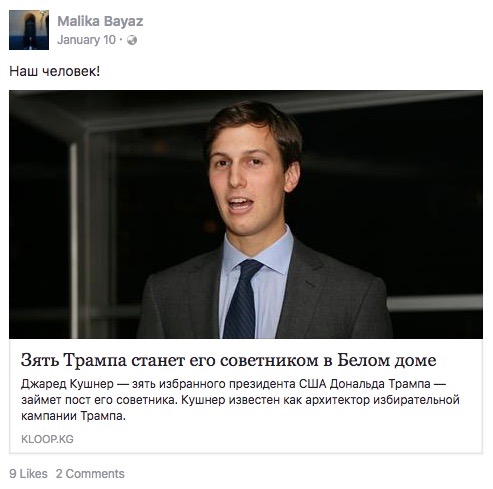 Kyrgyzstan Facebook user Malika Bayaz shared a news article on US President Donald Trump appointing his son-in-law Jared Kushner as a senior adviser with the ironic caption: “Our person!”

Tuuganchylyk can be a source of either personal pride or shame. When a member of a given tribe has achieved something outstanding, that pride is dispersed across other members of the tribe. If a member of an extended family or tribe has done something shameful, fellow members will work hard to play it down in front of outsiders.

This support network is particularly useful for divorced women, who suffer social stigma. Often a tribe will make an effort to include their divorced female kin in important events such as feasts, weddings and funerals, in order to show them their support and to reinforce the centrality of the family.

Some Kyrgyz tribes struggle under the weight of long-standing stereotypes. For example, a stereotypical sayak tribe member is crafty and mischievous, while a stereotypical solto tribe member should be brave and honourable. According to an oft-quoted saying, “Solto are the sated ones, while sayak are the naughty ones.” 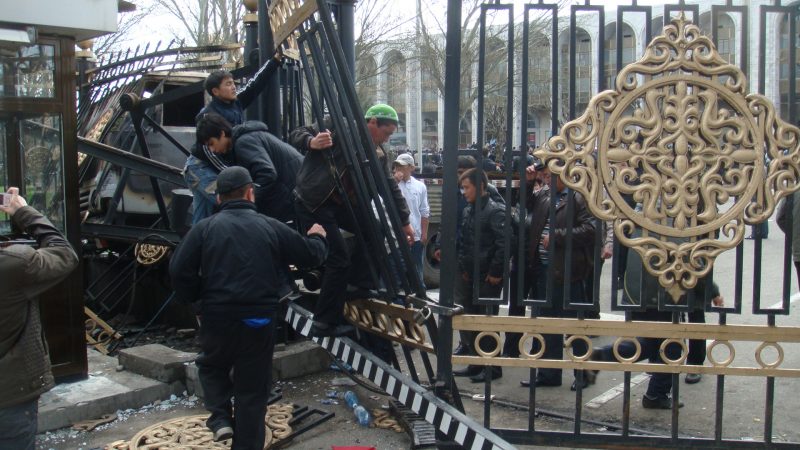 Vote for your blood, or at least your region

In the post-independence period, the word tuuganchylyk has become increasingly synonymous with a powerful culture of political nepotism. Typically, when there are elections to village councils in Kyrgyzstan, people will cast votes based on tuuganchylyk, even if the candidate they are voting for is unscrupulous. At the national level, the North-South geographic divide is likely to be an important factor deciding the outcome of fiercely contested presidential elections scheduled for October.

Tuuganchylyk proved the undoing of both of Kyrgyzstan's first two presidents, Askar Akayev and Kurmanbek Bakiyev, however.

Akayev, a distinguished physics professor who ruled the country from 1990 to his ouster in 2005, elevated his daughter, Bermet Akayeva, to important public posts, while his son, Aidar Akayev, and son-in-law, Adil Togonbayev, dominated the country's business sector.

Bakiyev came to power on the back of the street protests that felled Akayev, but repeated all his predecessor's mistakes. Moreover, as one of seven brothers, Bakiyev's tuuganchylyk was particularly strong.

The most loathed of the Bakiyev siblings, Janysh, dominated the country's security services, and was convicted in absentia in 2013 for ordering the murder of the president's former chief of staff. The same former chief of staff claimed to have received a severed human ear in the post when he first began plotting against the regime. Nearly a hundred protesters died in the revolution that ejected the Bakiyev family from power.

Although a Kyrgyz word, the idea of tuuganchylyk is alive and well in other cultures. In the tweet above, for instance, a Kyrgyz Twitter user hashtagged tuuganchylyk to draw attention to kin-based nepotism in the upper ranks of Facebook.

The ruling Trump clan in the United States, meanwhile, is nothing less than a tuuganchylyk fun-fest.

With Jared Kushner and Ivanka Trump both enjoying senior roles in the White House, and Donald Trump junior emerging as a key figure in the Trump-Russia investigation, social media users in Kyrgyzstan and other Central Asian countries have been keen to point out that their region isn't the only part of the world where the phenomenon exists.

See also: My Lost in Translation in Central Asia: My Tokol's Car Is a Toyota