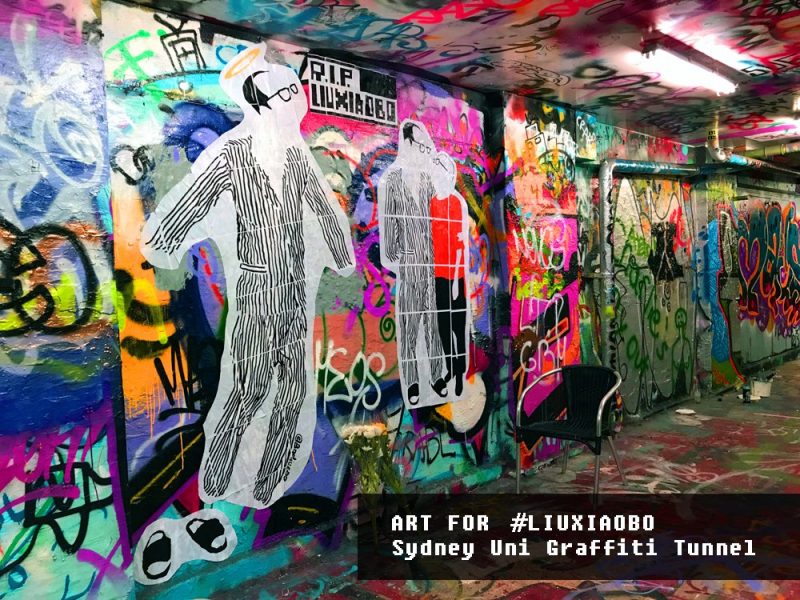 The ashes of the late Chinese democracy advocate and literary critic Liu Xiaobo were buried at sea near Dalian city in northeast China on July 15, two days after he died of liver failure.

But Liu Xiaobo's supporters believe that the he was buried at sea to prevent people in China from paying tribute to the Nobel laureate at his grave.

In fact, most of Liu’s friends could not attend the funeral. While his wife, Liu Xia, had appeared on photos of his funeral and sea burial, she has lost touch with her friends.

Liu Xiaobo had been sentenced to 11 years in prison in 2009 for “inciting subversion of state power” for his involvement in Charter 08, a manifesto that called for democratic reforms in China. He won the Nobel Peace Prize in 2010 for his human rights work.

On social media, including Weibo and WeChat, researchers documented a significant increase in censorship after Liu Xiaobo’s death. According to Toronto-based digital rights research group Citizen Lab, discussions of Liu and his work are no longer tolerated.

For WeChat, before his death, discussion of Liu was allowed as long as it did not touch on certain sensitive topics such as “Charter 08” or his medical care. After his death, any mention of his name in English and Chinese (both simplified and traditional) is enough to get messages blocked. His death is also the first time we see image filtering in one-to-one chat, in addition to image filtering in group chats and WeChat Moments [which is equivalent to Facebook's news feed].

For Sina Weibo, there already was a ban on searches for Liu’s name in English and Chinese (both simplified and traditional). However, after his death, his given name (Xiaobo) alone is enough to trigger censorship, showing increased censorship on the platform and a recognition that his passing is a particularly sensitive event. Nevertheless, there is also evidence suggesting there continues to be genuine user interest in producing and finding Liu-related content using alternative keywords. 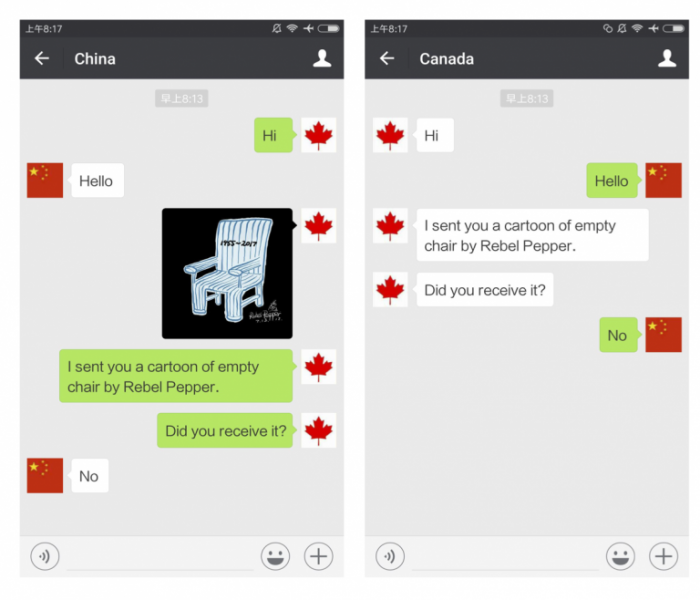 For the first time, image-sharing was blocked in one-on-one chat. Left: A Canadian user sends a picture of a politically symbolic chair image to a friend in China. Right: The recipient does not see the chair. Screenshots by Citizen Lab.

The research team believes that censorship is rising due to “the authorities’ fear for the potential of collective action” on the one hand, and as a tactic to “save face or avoid embarrassment” on the other.

Liu Xiaobo’s death is a politically sensitive event for the Chinese Communist Party, as Liu was considered one of the most moderate Chinese dissidents because of his deeply held commitment to non-violent struggle.

He participated in the 1989 Tiananmen Square pro-democracy protests, persuaded the students to retreat when the military troops moved in, and stayed with them until the last moment. Instead of leaving the country, he received a two-year prison sentence and continued to advocate for peaceful political transformation in China.

He returned to prison years later for being one of the authors behind Charter 08. In his most famous speech, which he sought to read at his trial (but was prohibited from doing so), he declared “I have no enemies and no hatred.”

The Chinese Communist Party had kept Liu’s physical condition a secret until late June 2017 when Liu’s lawyer publicly confirmed that he was on medical parole for late-stage liver cancer treatment.

Since then, an international campaign calling for Liu Xiaobo and Liu Xia's freedom picked up momentum.

Will China become the 1st country since Germany under the Nazis to have a Nobel Peace laureate die in custody? #LiuXiaobo #CarlVonOssietzky pic.twitter.com/dg7y1CLa3p

Chinese authorities were not so moved, and insisted that Liu had the best possible care in China. Chinese Communist Party mouthpiece Global Times claimed, “Today's China is stronger and more confident, and will not yield to Western pressure.”

As Citizen Lab noted in their report, Chinese authorities had repressed public discussion of Liu’s condition through censorship. But they also exercised strict control and manipulated the narrative around this illness and death:

To control the narrative around Liu’s illness, the CPC strictly regulated physical access to him. It denied his request to receive medical treatment overseas, despite repeated calls from NGOs and governments, including from German Chancellor Angela Merkel, who asked Beijing for a “signal of humanity for Liu Xiaobo and his family.” Beijing nevertheless resisted, saying he was already receiving the best possible care in China and citing Liu’s fragile health, disagreeing with the medical opinion of two foreign doctors who visited Liu and who deemed him strong enough to leave the country.

A foreign medical team composed of a German and an American doctor had in fact visited Liu, while the foreign doctors did agree that the treatment was appropriate, they also said that Liu was in condition to travel abroad for medical treatment.

After Liu’s death, information and images released to the public appear to have been very carefully selected. In funeral photos, Liu’s friends were not seen. Liu Xia had to thank the plain clothes security police officers for attending:

A line of plainclothes state security officers standing right across from #LiuXiaobo‘s family at funeral, some tailed journos yesterday pic.twitter.com/GdlD1yKC5v

The televised gratitude of Liu Xiaobo's brother, Liu Xiaoguang, for the Chinese Communist Party was another well-staged media event:

really sad to see how #LiuXiaobo‘s eldest brother #LiuXiaoguang to say everything to praise the party & govt & even thanks govt's humanity pic.twitter.com/3j8ZKoVqsS

Liu Xiaobo’s sea burial has been widely interpreted as an act intended to eliminate his presence and influence in China:

“I can foresee that in the future, activists and ordinary people will go to the sea and memorialize Liu Xiaobo.” https://t.co/pV4kMONXTh

At present, Hong Kong may be the only city in China where citizens can publicly mourn the loss of Liu Xiaobo:

On July 15, hundreds attended a candlelight vigil in Hong Kong and also demanded that authorities end house arrest for his wife:

Participants stream out of Chater Gardens at a candlelight vigil for Nobel laureate Liu Xiaobo in Hong Kong pic.twitter.com/Dpa0gydTSL

These efforts continue online, under the hashtag #FreeLiuXia.