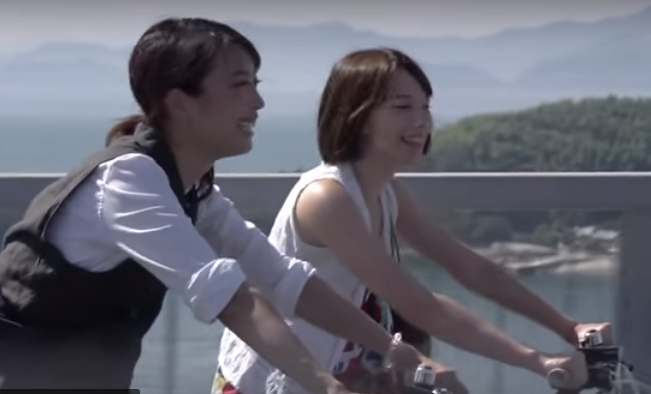 A screenshot from the 2014 film “Riding the Breeze.”

Like all colonizers, Japan squeezed resources from Taiwan. However, Japanese colonialism also sped up modernization of the island, with infrastructure development and the implementation of education and government administration systems.

Thus, when the Kuomintang (KMT) government of the Republic of China fled to Taiwan in 1949 after they lost to communist forces in the Chinese Civil War and brutally established power there with martial law (1949-1987), a sense of nostalgia about the Japanese colonial rule took root, even though the military government under KMT told Taiwanese that they should hate Japan because of their colonization of Taiwan and their invasion of China.

During the Korean War in the early 1950s, the two countries collaborated to provide supplies for the US army. This collaboration continued until Japan established formal diplomatic relations with the People’s Republic of China and severed official ties with Republic of China on Taiwan in 1972 (due to the One-China Policy).

Since the end of martial law in Taiwan in 1987 and Japan's Emperor Showa passed away in 1989, there have been more and more cultural and civic exchanges between Taiwan and Japan over their pre-war and war-time memories, and the complicated relationship has become the subject of various treatments, fiction and non-fiction alike. The following films, by Taiwanese and Japanese directors, listed in chronological order not only address the delicate, complex and often times repressed sentiments about the Japanese colonial rule in Taiwan, they also redefine the ties between Taiwanese and Japanese past and present.

Both movies were directed by Taiwanese director Toon Wang.

‘Strawman’ is a satire about some poor Taiwanese farmers in the last days of Japanese rule finding an unexploded bomb dropped by US military aircraft.

‘Hill of No Return’ is a tragic love story, set in 1920s when Taiwan was still Japan’s colony. It centers on poor Taiwanese miners who died in a gold mine in northern Taiwan.

This documentary, directed by Taiwanese director Liang-Ying Guo, chronicles the story of Taiwanese child laborers, called ‘shonenko’ in Japanese, who helped the construction of fighter planes in Japan’s naval arsenals in Koza, Kanagawa.

It inspired many discussions, and even led some young Taiwanese to discover that their grandfathers had been shonenko when they talked about the film with them.

Inspired by Ming-Liang Tsai's movies, Atsuko Sakai, who is also a Japanese journalist, visited Taiwan in 1998. She was surprised to find Japanese-speaking senior Taiwanese and started to study the history of Japan's colonization of Taiwan. The first two of the trilogy record the life stories of the generation who lived under colonial Japanese rule.

This blockbuster movie by Taiwanese director Te-Sheng Wei is about a Japanese teacher who fell in love with a Taiwanese woman, but was forced to return to Japan from Taiwan after WWII. He wrote her seven love letters, but they were not sent. After he passed away 60 years later, his daughter found the letters and decided to send them to Taiwan to the woman's old address, Cape No. 7.

This movie ignited furious debate in Taiwan because some people claimed that it showed too much attachment towards Japan. It was eventually censored in mainland China, while a famous Japanese writer, Shuichi Yoshida, was inspired by the film and wrote the novel ‘Ru’, about the construction of the high-speed rail system in Taiwan assisted by a Japanese company. The book was published in 2012.

Unlike director Wei's first movie, the two movies in this series are about the Musha Rebellion — in 1930, the Seediq indigenous group in the Musha area attacked the ruling Japanese in response to the oppression by Japanese authorities. Although the Japanese army regained control over these areas after fierce fighting, including dropping mustard gas bombs, the incident forced them to change their policies toward Taiwanese aboriginal people.

This movie, by Taiwanese director Umin Boya, is based on the true story of a Taiwanese high school baseball team, which won second place in the Japanese High School Baseball Championship during Japan’s colonization of Taiwan. The team was unique for the time because they had Han Taiwanese, aboriginal Taiwanese, and Japanese students, and provided relief for the underlying ethnic conflicts in a sensitive political period.

This film, by Japanese director Koji Hagiuda, is a road-trip movie about a middle-aged Japanese woman and a young Taiwanese girl who cycle together in Taiwan.

Based on a true story, the movie by Japanese director Akihisa Yachida is about a Taiwanese woman and a Japanese man who meet online and eventually get married. It reflects a growing trend of interactions between these two countries happening on an individual level.

“Wansei” refers to Japanese who were born in Taiwan under Japanese colonial rule. The documentary film, by Taiwanese director Liang-Yin Kuo and Japanese director Shuhei Fujita, is about a famous Wansei painter Tetsumi Tateishi.

Taiwanese director Yin-Yu Huang's documentary, on the other hand, tells the stories of Taiwanese who were encouraged to move to Okinawa during Japan’s colonization but could not return to Taiwan after WWII. They had became stateless for decades.

This film by Taiwanese director Ya-Li Huang is about a poetry society that emerged in the 1930s who used poetic expressions to subvert colonial cultural domination and transform literature in Taiwan.