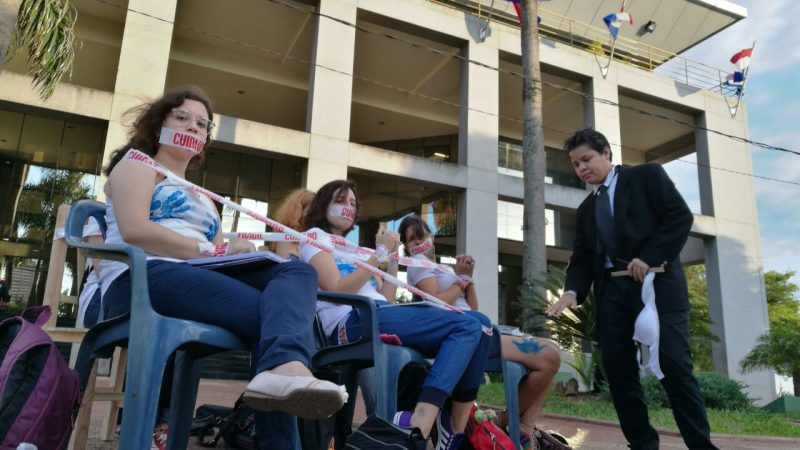 The Platform of Feminist University Students (PUF, its Spanish acronym) protest on the day Cristian Kriskovich was sworn in as a member of the Board of Magistracy. Some senators also left the session in protest against the professor. Photo by Rodrigo Centurión from the PUF archive and used with permission from the Kurtural website.

This story is an edited version of a piece originally published by Paraguayan website Kurtural from their series “The Country of Women.”

The professor insisted his student, Belén Whittingslow, meet with him. He suggested she wear a hockey uniform. He said she seemed sexy. When Whittingslow declined to meet up and said she only wanted to be friends, the professor responded: “Offering friendship to someone who asks for love is like giving a peck on the cheek to someone who wants to screw you savagely against the wall.”

The professor, Whittingslow says, is Cristian Kriskovich, a powerful lawyer at the Our Lady of Asuncion Catholic University law school, one of the most prestigious universities in Paraguay, and one where the sexual harassment of female students is an open secret.

Whittingslow reported the harassment when she learned that Kriskovich had told a group of professors they were in a relationship. The district attorney’s office, which took Whittingslow’s testimony and viewed the messages she’d received, saw evidence of sexual harassment. But after several changes of attorneys, the case arrived before Fabián Centurión, who rejected the allegations. Even though Kriskovich had admitted sending messages to Whittingslow, the attorney declined to examine his telephone. For Centurión, the teacher merely “courted and wooed” his student, and there was no crime to investigate.

A day after Centurión dismissed the case, Whittingslow herself was accused of buying grades. “I couldn’t matriculate at another university,” Whittingslow says. “I had to finish my degree outside of Asuncion. It cost me another three years. For a long time I was afraid to go out at night, and to this day I cannot read anything Kriskovich has written. I gained 60 pounds and a valve in my heart prolapsed. I wouldn’t wish this on my worst enemy.”

Now, Kriskovich is demanding $450,000 for damage to his reputation. Whittingslow says that at least three of her classmates who were also expelled after the grade-buying scandal are innocent, but were accused after having refused Kriskovich's advances. “Imagine what it costs to pay lawyers for us. Many of my classmates are from humble families from outside the capital and are here on scholarships; they won’t have the money to go to court,” Whittingslow says. She wants to spare them the distress she experienced for taking a man as powerful as Kriskovich to court.

State, Church and academia: A pact of impunity for harassment

University students protest against Paraguayan Archbishop Edmundo Valenzuela. The Church representative had said “we should be careful not to make a mountain out of a molehill,” about allegations of sexual assault by a priest in the Paraguayan city of Limpio. Photo by Rodrigo Centurión from the PUF Archive and used with permission from the Kurtural website.

In addition to his teaching, Kriskovich has close ties with the Catholic Church and is an influential lawyer in Paraguay's judiciary. In the case of Belén Whittingslow, the Church closed ranks around Kriskovich. Edmundo Valenzuela — the archbishop of Asunción, the highest authority at the Catholic University of Asunción and a bridge between the university and the Church hierarchy — was one of the first to defend Kriskovich.

Kriskovich also belongs to the Jury for the Indictment of Judges, a group charged with ruling in cases where judges are accused of crimes or poor performance of their duties, and he is a member Paraguay's Board of Magistracy, an institution that chooses judges and public attorneys in the country.

When Kriskovich was sworn in to his position on the Board of Magistracy in early March, 2017, several senators left the room in protest, given Whittingslow's accusations of sexual harassment against Kriskovich. But five days later, the board of the Catholic University of Asuncion reiterated its support for the professor.

“The Church wants a representative in the judicial branch through the Catholic University so that they won’t hear cases against priests, including cases of pedophilia and sexual abuse. That’s why they keep Kriskovich in the university,” says Whittingslow’s lawyer, Juan Martín Barba.

A daily toll of harassment against female students

Portillo asked the students in her seminar to record everyday sexist situations that happen at the university. In class every day, her students heard male chauvinistic comments from the professors, sometimes veiled as jokes and insults.

“What do women have in common with grilling meat? Both are bloody, you turn them over and you eat them,” said one epistemology professor. “Today she’s my student, tomorrow she can be my friend and the day after… who knows?” said a philosophy teacher. “Girls, girls,” said a professor in an Introduction to Social Theory class, “stop touching one another. You’re giving me ideas.” The same professor said things such as, “If you’d like to, we could have the class with the lights out,” “I see a pretty butt hobbling around,” and “Have you thought what pretty kids we could have?”

Portillo says there are many barriers that prevent students from recognizing themselves as victims of harassment and reporting it: the notion that it’s the students’ responsibility to stop their professors, fear of damaging their reputation, little support from other students, and even the fact that most of the university authorities are men and could side with the professor being reported.

María Lidia Báez, another student at the Catholic University of Asuncion, futilely filed a report denouncing a professor’s harassment. Despite the widespread impunity at the university, she believes harassment needs to be reported. “If we don’t report it, it’s easier to hide it, and it will go unnoticed,” she says. But Báez admits that she only took the step of reporting the harassment when she was no longer in the class. “It was a huge internal conflict because he’s a renowned professor who does worthy and productive work. I was afraid of being marked, that they would lower my grades or my GPA.”

The students’ response: Guidelines for prevention and attention 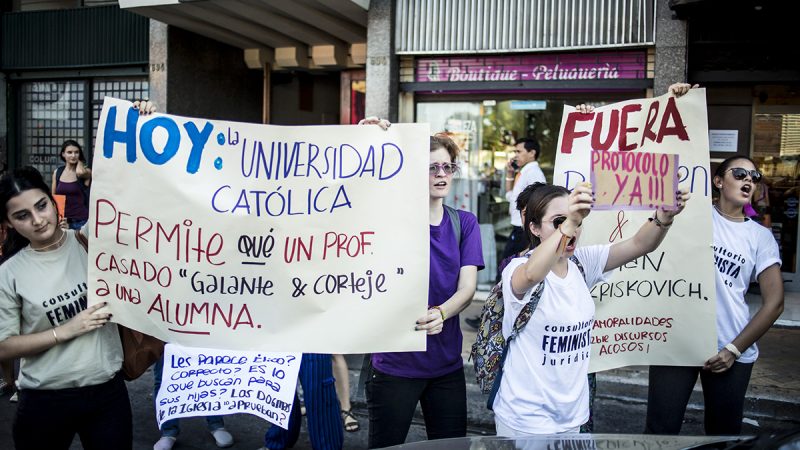 Students at the Catholic University of Asuncion developed a draft policy for the prevention of, and attention to, cases of gender violence and presented it to university authorities in 2016. They’ve yet get to get a response. Photo by Juanjo Ivaldi. Originally published on the Kurtural website and used with permission.

Of 63 Latin American universities surveyed in 2016 by the media outlet Distintas Latitudes (“Different Latitudes”), only 12 have protocols for handling sexual violence. In another survey conducted by Distintas Latitudes, of 173 students from 14 countries, 67 percent of respondents said they knew of at least one case of sexual harassment at their university.

Faced with the absence of tools for responding to harassment within their university and the lack of response to complaints, the students in Portillo’s 2016 seminar drafted a protocol for prevention and response to cases of gender violence. The protocol was based on norms already in place in universities around the globe, such as the University of the Republic in Uruguay.

The seminar students presented their draft protocol to the chancellor, but they’re still waiting for a response.