In the Ruins of Eastern Abkhazia's ‘Ghost Towns’, Life Goes On

Photo by Dmitry Stateynov for OC Media. Used with permission

The following is a version of a partner post written by Dmitri Stateynov that first appeared on the website OC Media.

The post-war recovery has been slow to arrive in eastern Abkhazia, particularly in the district of Tkuarchal. More than 20 years have passed since the Georgian–Abkhaz war officially ended, but its scars still bear a heavy imprint in this part of the republic.

During the Soviet period, different ethnic groups lived and worked together in the area; Russians, Greeks, Abkhaz, Georgians, and Armenians. Most of them abandoned their homes during the war. Today, mostly Russians and Abkhaz live here.

Such settlements are known in Abkhazia as ‘ghost towns’. If their pre-war populations topped 10,000, today, only a few hundred people live in them.

This phenomenon is symptomatic in Tkuarchal. As of 2011, the district's entire population was 16,000, having barely risen for over a decade. In 1989, approximately 43,000 people lived in the district. 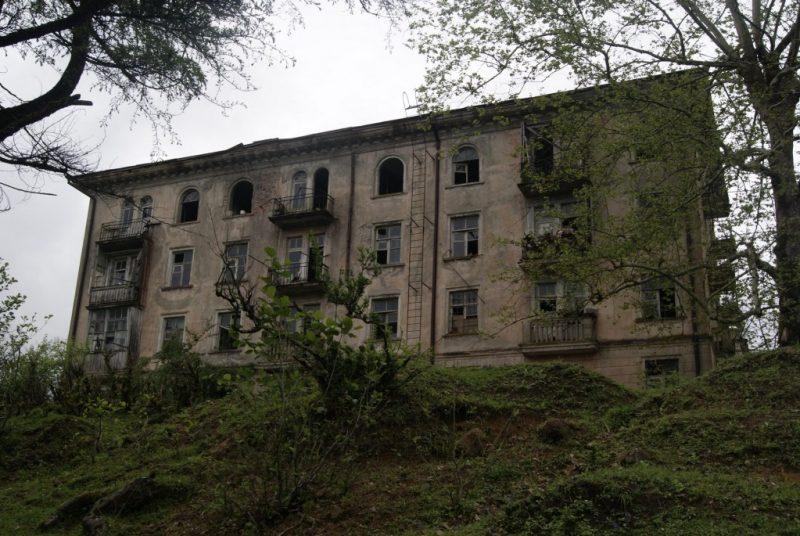 ‘All of this is a consequence of the war’

The emptied five-storey Soviet-era apartment blocks dating back to the early 1960s — Khrushchyovkas — stand as symbols of the region's decline and desolation. The buildings are decaying and it is rare that more than two families inhabit them. 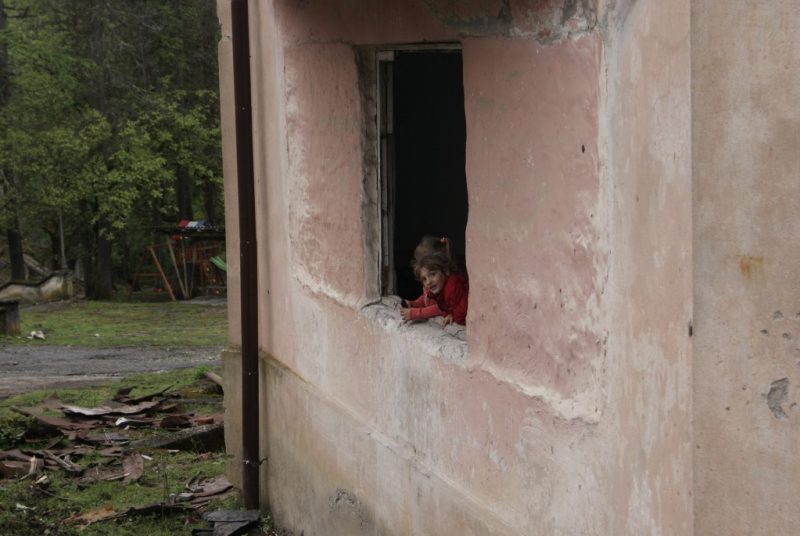 At the entrance to the village of Dzhantukha, I meet a local resident, an elderly man. He starts a conversation that he does not want to finish.

“All of this is the consequence of the war.”

“Why talk? Everything is clear anyway.”

Before the war, life in the village was vibrant, with community centres, schools, and kindergartens all serving the community.

Now, cobbled streets host buildings of faded magnificence. The people that once lived in this place, and made their contribution to the Soviet Union's centrally planned economy, have now left.

In one ghost town, Dzhantukha, there are about fifty inhabitants. Some 38 live in Akarmara, with similar numbers in the other villages. Those khrushchyovkas that still contain one or two families are marked out by the laundry drying on their balconies.

Two young girls, both aged seven, peek out from the window of a ruined house. Upon noticing the camera in my hands, they immediately turn away.

‘Our mother forbade us to be photographed’, one of them says.

‘She forbade it and that is all’.

The girl whispers something to her friend and they abruptly exit the ruined building and disappear.

Most people in the area work for a small Turkish coal mining firm, Tkuarchalugol. Families are also involved in subsistence farming; cattle-breeding, bee-keeping, vegetable-growing. It is hard to make ends meet. In winter, the district administration supplies free candles and bread to the villages. 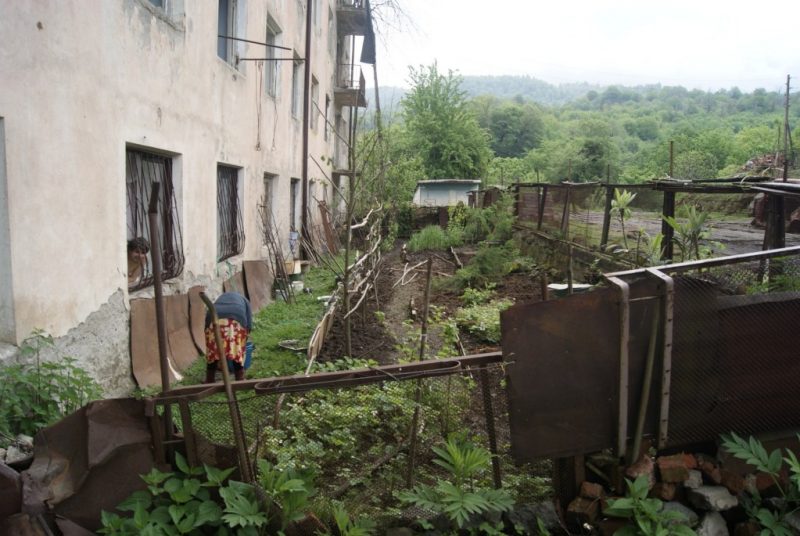 “I don’t know what will happen, but we will plant zucchini”

About ten years ago, an elderly woman named Galina, or as her neighbours call her, Aunt Galya, moved to Dzhantukha from Akarmara. Despite her eldest daughter living in France, Galina does not intend to leave Abkhazia to live with her. “My heart draws me to Abkhazia,” she says.

Galina refuses offers of financial help from her daughter, insisting that she provide for her young grandchildren instead. Galina's monthly pension is the equivalent of just nine dollars.

“If you don’t have a vegetable garden and a house, you can't survive,” she admits.

Aunt Galya says that she and other residents of the village try to meet up regularly and celebrate holidays together. 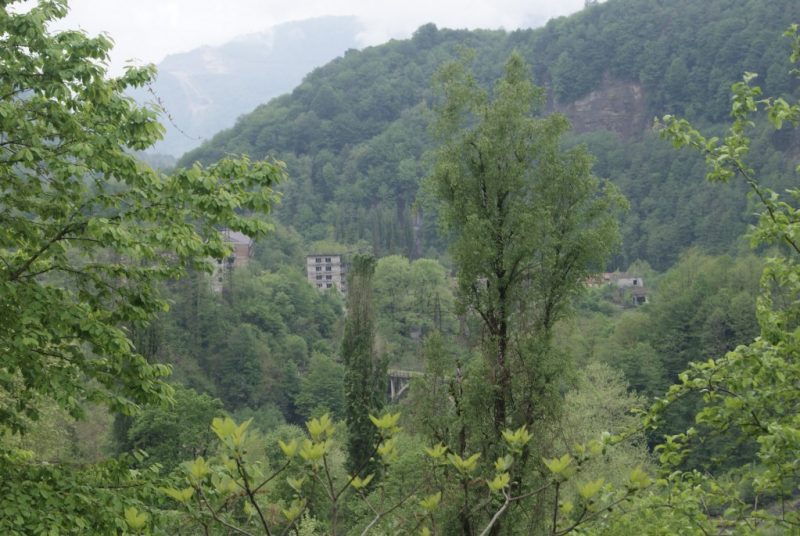 “A 90-year-old woman lives in this building, as well as a young family, and me. When there are holidays, we visit each other. But we can’t always — everyone is busy with their own affairs.”

As she is talking, a younger neighbour walks out onto the balcony.

“Natasha”, Aunt Galya calls out to her. “They said that we can plant zucchini. I already prepared the ground. I don’t know what will happen, but we will plant zucchini.”

‘People get used to everything’

Galya's conversant, Natasha, has lived together with her husband and five children in her house for some time. Natasha was 11-years-old when the war began. Every day she recalls village life before the war.

Despite having relatives living in central Russia, Ossetia, and Georgia — the country Abkhazia broke away from — they have not had the opportunity to leave. 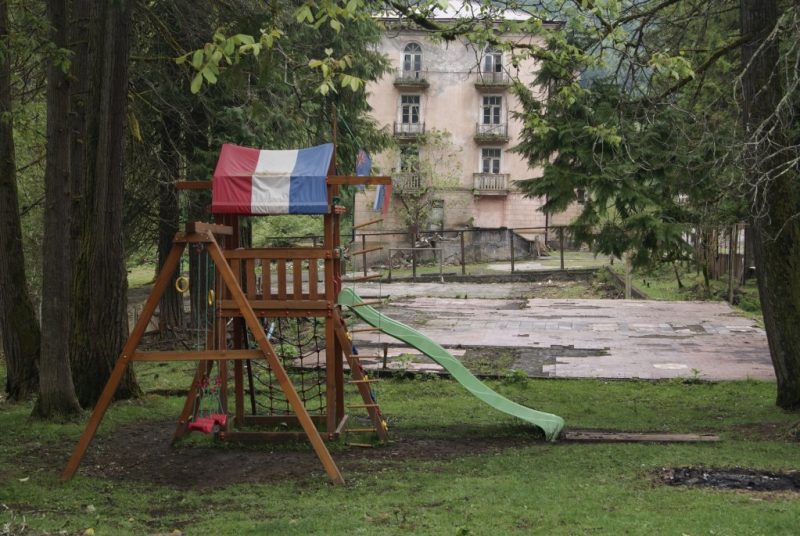 “We recently bought land in (Abkhazia's administrative capital) Sukhumi. We want to build a house there, but this won’t happen any time soon,” she says ruefully.

Natasha receives a child allowance of roughly $9 for each child. Her husband works at the coal pit. The young family has its own farm. Near the house, where the kindergarten Natasha attended as a child once stood, they keep pigs, cows, cocks and hens.

She says that when people started leaving the village after the war, it was scary at first. But the fear disappeared over time. 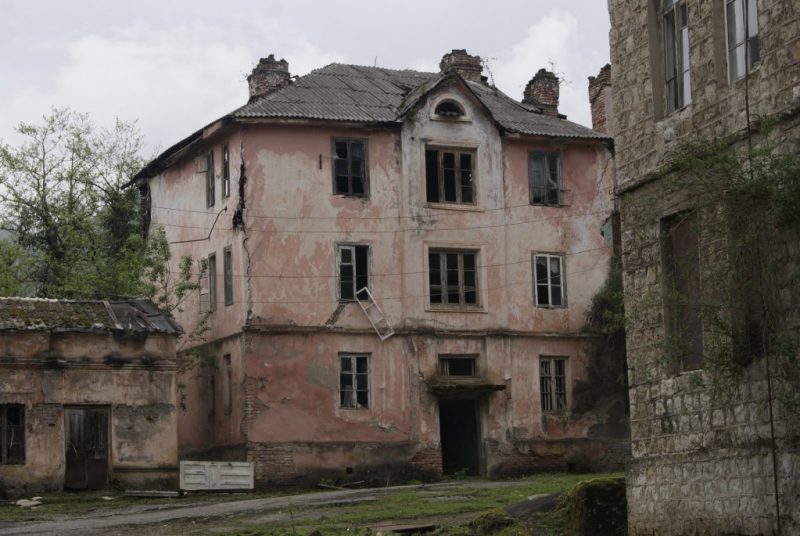 “We are not afraid of the darkness in the street or the lack of people [any more]. People can get used to anything. Many people think that these buildings were destroyed during the war. In fact, it’s all due to looting. There was no work after the war and everyone lived however they could. Every day I remember what the city was like, and the war.”

As our conversation draws to a close, a young boy runs by. He runs through the window of a ruined building and hides. A ball flies out of the window and another boy chases it. He kicks the ball and it rolls down the hill.

A pack of children are in pursuit of the ball now, all of them shouting. As they run, some of them pick up stones and hurl them at the dilapidated buildings. These ruins are a part of their childhood, which is as carefree as any other. They have never known anything else.

All place names and terminology used in this article are the words of the author alone, and may not necessarily reflect the views of OC Media’s editorial board.