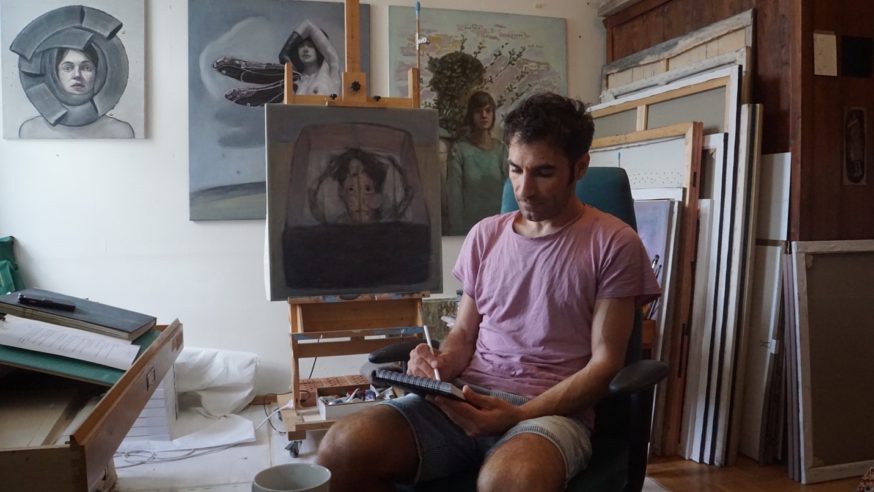 Artist Akram Al-Halabi in his studio apartment in Vienna. May 5, 2017. Photo by AJ Naddaff/SyriaUntold.

This story was originally written for Syria Untold by AJ Naddaf, an Arab studies and political science student, French teacher, and research assistant for the Arab Studies chair at Davidson College. It is republished here as part of a partnership agreement.

Akram al Halabi is an artist from the mountainous plateau of Majdal Shams, the largest of the four remaining Druze-Syrian communities on the Israeli-occupied part of the Syrian Golan Heights. Despite coming from a contentious region, Al-Halabi does not let politics drive his art work. Rather, he utilizes art as a medium to express his search for harmony between nature and humanity.

Born into a family of several artists, Al-Halabi’s art career began as a child when he would paint and draw under the tutelage of an art teacher from his village. From 1997 until 2000, he studied drawing and painting at Bayt Al-Fann. Then he studied at the Faculty of Fine Art at Damascus University (2000-2005). In 2003, he participated in the summer academy of Darat al Funun, supervised by Professor Marwan Kassab Bashi in Amman, Jordan.

While in school, however, his eyes were set on exhibiting and continuing his art elsewhere. The incessant political pressure of his identity in Israel motivated long hours dedicated to mastering the meticulous techniques of perspective, light and shape behind his award-winning art. His goal was simple: to create art in a place where he wouldn't have to move from checkpoint to checkpoint.

Upon completing his studies at the Faculty of Fine Art, he became the first from the Golan Heights to win a scholarship to continue his studies in Berlin. But he was denied travel by the Syrian government simply because of his uncontrollable statelessness. After Israel officially annexed the Golan Heights in 1981, the year Al-Halabi was born, it began regarding Syrians of the Golan as “residents of Israel” but not citizens. Al-Halabi had been allowed to study in Damascus even though he was living in Israeli-occupied Golan because of a program supervised by the UN and made possible through an agreement between Syria and Israel. 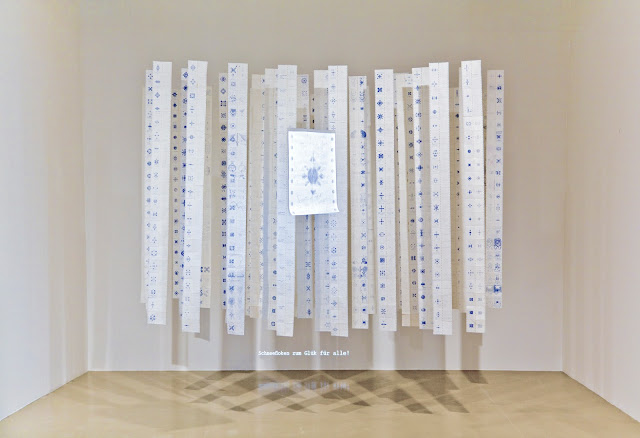 Despite the hassle, Al Halabi persevered. In 2007, two years after he graduated, he won another scholarship for his art through the “One World Scholarship of the [Vienna-based] Afro-Asian-Institute,” which supports 10-15 students each year from Africa, Asia and Latin America who have a developmental focus in their studies. He finally came to attend the Academy of Fine Arts of Vienna, and finished his studies with distinction in 2012 with the class of Professor Erwin Bohatsch.

In addition to his academic study of art, Al-Halabi has participated in sundry exhibitions across Europe. His work has also been collected by many private collectors in the European Union and the Middle East, as well as in The British Museum, London, and the Kupferstichkabinett collection in Vienna.

Grappling with his own identity in an Austrian context, while at the Academy of Fine Arts of Vienna, he was inspired to travel from 2009 to 2012 all over Europe, to Palestine and Israel, and back to his village. During this journey, Al-Halabi asked people, whom he met randomly, to define themselves at the moment of their meeting and to write this definition on individual papers used for invoicing. He called the project “Snowflakes,” later adding small geometric forms using pliers to create lines in the shape of fingerprints and snowflakes. 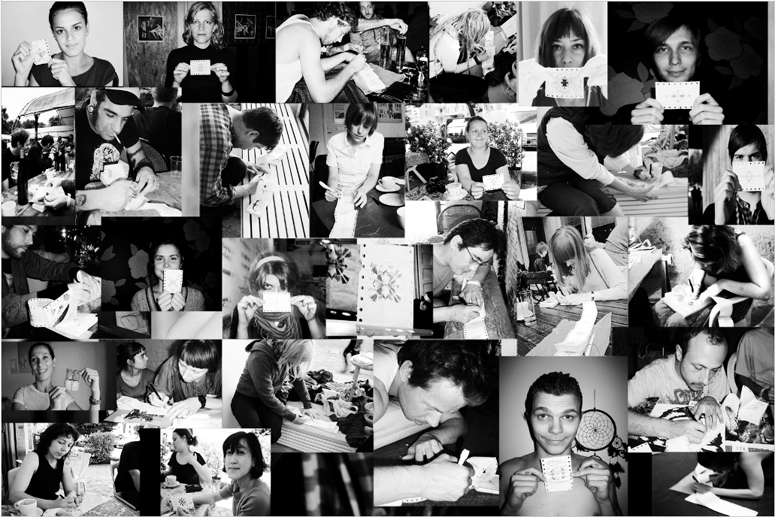 Some of the people out of the 800 or so who have participated in Akram al-Halabi’s ‘Snowflakes’ project from 2009 to 2012. Photo courtesy of Akram al-Halabi; all rights reserved to the author.

With the dye of these carbon papers turning blue upon pressure, each participant received a copy of their work. “There are so many people who actually want and need to say something to you, especially old people in parks,” he told SyriaUntold. “I was motivated because I’m born undefined — and I’m still undefined — but I came to understand myself more through understanding others. If you go to the streets and begin talking to strangers, you will be amazed at how some people become your friends and can understand you.”

He further commented on the danger of being stuck in certain boxes. For example, many Israelis and Palestinians were unwilling to participate in the project simply because Al-Halabi did not align with their religious ideals.

The open-minded, inquisitive and amicable spirit from which the project was conducted is what best describes Al-Halabi’s personality. In 2010, while traveling back to his village every summer to see his family, he created a performance project called “Love Comes First,” in which 200 people from the Golan Heights wrote with their bodies the statement: “Love Comes First” (in Arabic, Al-Mahabbah Awwalan). 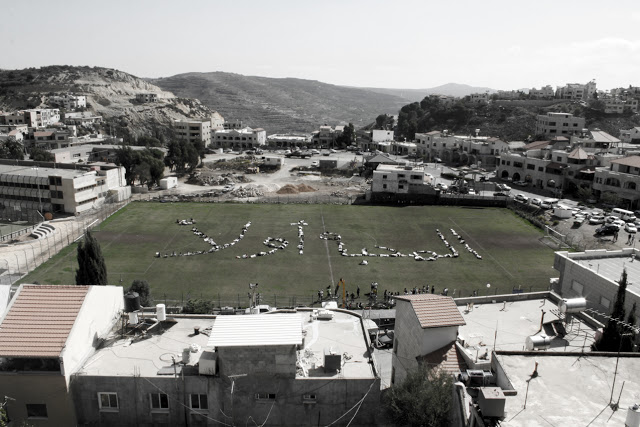 The next year, as the Syrian uprising erupted, Al-Halabi watched with suspense from his television screen. “Because I had lived in Damascus and some of the areas most affected by the revolution, I had to produce art. I do not have the power to do anything though. I can just look and show what is happening through another lens,” he told SyriaUntold.

Taking gruesome images from his computer that were widely blasted in the media, Al-Halabi conceived the project “Cheek,” erasing the images by adding English words and Arabic letters around them, sometimes sketching the image’s most basic outline. “I wanted to make a third level of perception, making connections between word and image to the viewer,” explained Al-Halabi. His reprints list traits that appear in the image by their names, simply to remind the audience that they exist: “Ear, Eye, Brow, Window, Blood, Nose, Child, Neck, Throat, Chin, Shoulder, Heart, Mother, Fingers, Cheek…” 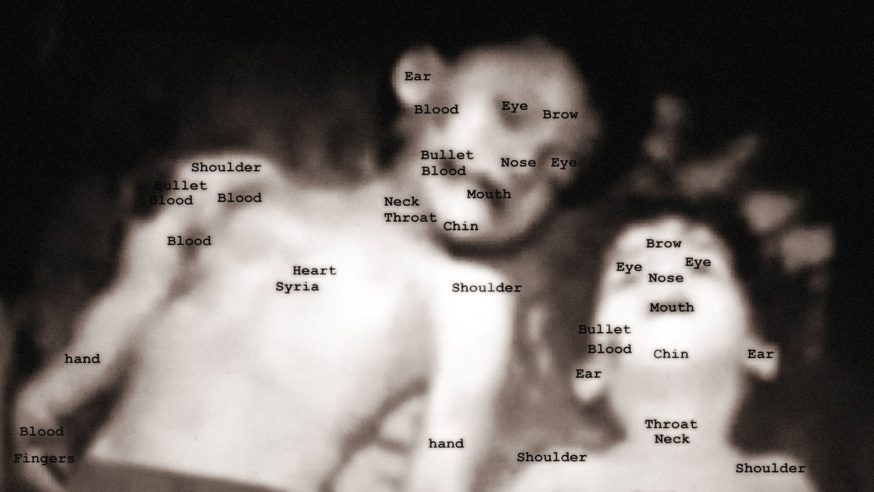 ‘Never Forget’ portrays the Houla Massacre in which 34 women and 49 children were slaughtered by Syrian regime forces. It is part of the ‘Cheek’ project. Photo courtesy of Akram Al-Halabi; all rights reserved to the author.

The project represents a story of poetry in space, removing the horror from viral blood-stained pictures. It had been conceived between 2011 and 2013, during the first couple years of Syria’s revolution, before the conflict became an all-out proxy war. For many nights he could not sleep until “Cheek” was completed, and only then was he able to move on with other projects. 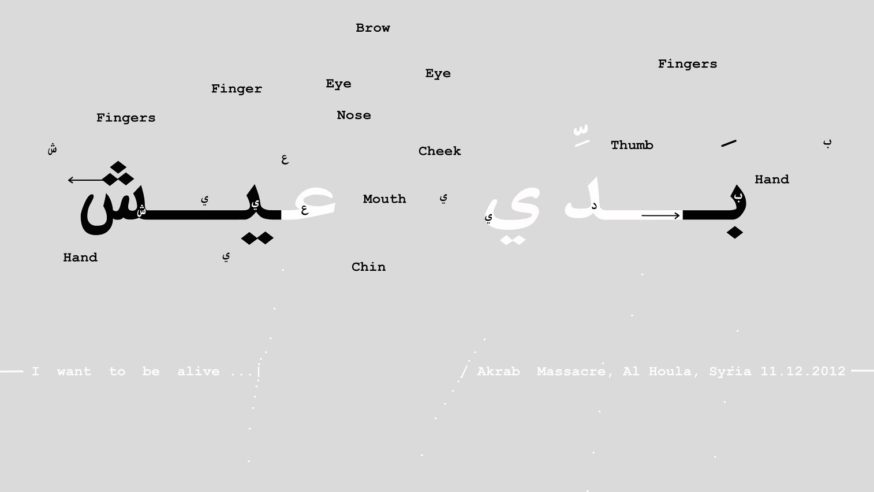 The wide range of mediums and themes in Al-Halabi’s work are akin to his conception of identity, as something malleable and evolving overtime, like a snowflake. Above all, Al-Halabi believes that geographical identities are meaningless markers for defining not only people, but himself. What’s most important for him is to experience life not as boring or straightforward, but to accept its complexities, and to find harmony in his days. Creating art is one way for him to express this.

Yet the power of engaging in deep conversations, reading good literature, swimming, observing nature’s beauty (like his fascination with dragonflies), and acting in theatre performances are all expressions that give his life meaning, and make him feel defined. “Don’t forget to enjoy your day,” Al-Halabi told SyriaUntold. “That’s more important than this article anyway.”

Dragonfly, B4, oil on canvas. 2017 Photo courtesy of Akram Al-Halabi; all rights reserved to the author.

In November, Al-Halabi will attend the opening of a group exhibition featuring his works in Japan: “Diaspora Now” at the Museum of Fine Arts in Gifu (11/11/2017 – 8/1/2018). See more of his polyvalent artwork in his portfolio here.