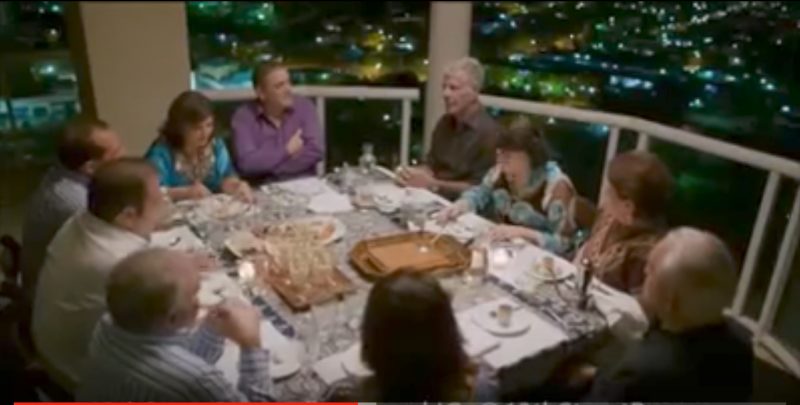 A screenshot from a YouTube video of the Trinidad and Tobago edition of Anthony Bourdain's show, Parts Unknown, which airs on CNN.

American celebrity chef Anthony Bourdain caused a stir when he visited Trinidad and Tobago earlier this year, with many who met him posting selfies and hashtagging the heck out of Facebook. But the effect that the edited episode of his show “Parts Unknown” had on residents of the twin islands was far greater.

At first, the main bone of contention was with Bourdain's assessment of the country's crime situation, which many netizens had to admit was not an exaggeration. One blogger suggested that the show did not do enough to highlight the wonders of the country — a stance which others firmly countered — and Facebook user Niala Maharaj was struck by the silence of women in the episode, saying that modern-day “iron chefs” have “wrenched food preparation from the realm of nurturing and bonding into the arena of winners and losers.”

However, the online ire soon turned towards a segment of the show that featured members of the country's Syrian-Lebanese community (many of whom are well-to-do) in which businessman Mario Sabga-Aboud described the group as “the most powerful”. Peter George, a community elder, also said that there is now “a measure of concern” because the “huge middle class” which acted as “a security in terms of any possible conflict between the haves and the have nots” has been eroded.

The comments sparked outrage. Poverty levels in Trinidad and Tobago have been steadily rising; it is estimated that at least one in five people live below the poverty line.

Muhammad Muwakil, a spoken word artist, musician and social activist who was also featured in the episode, commented on Facebook:

I was really taken aback by his description of the middle class as ‘the security’, a buffer zone which exists solely for the protection of the ultra rich and the life they have carved in this Trinidad that has been ‘good to them’. An ugly truth, a truth for him nonetheless. […]
Things can change though, this we believe. I […] want you to know that it is more than within your scope and ability to change the situations about which you lament. And as you rise so will we all.
My hope is that you and others of your ilk recognize that you have as much a role to play as we, the powerful, in making this a safe country for all of us.

Social media was immediately in a big hullabaloo over the statements, with some netizens quipping that they “now know the purpose of the middle class”. One citizen, Ian Smart, staged a one-man protest outside a branch of the coffee shop chain that Sabga-Aboud owns. In an interview with Loop TT, he railed against everything from “the thinking of the one percent” which he blamed for “preventing renewable energy from taking root” in Trinidad and Tobago, as well as a host of “economic and social ills”.

Mr Smart says his protest is not against the Syrian ethnic group but rather the 1% who contribute to economic inequality in T&T @cnewslive pic.twitter.com/qwJ2q26uWr

A subsequent radio interview he gave was problematic, and most netizens did not take his “cause” seriously.

Whether social media users took a cue from Smart's rhetoric or not, the discourse began to take a hateful turn, prompting Twitter user Rhoda Bharath to say:

The statements were tasteless but this is taking the outrage too far.#FeedingThe5000#SmallAndMighty pic.twitter.com/LXZNNHwbtL

Journalist and filmmaker Kim Johnson addressed the issue of race and prejudice in a few public Facebook posts, recalling that “years ago when the City Council was cleaning up pavement vendors in the Christmas season the only man who stood up for them was textile trader Jimmy Aboud, who pointed out they were making an honest living, much as how he'd started, and they should not be made to suffer for it. Nobody else came out publicly for them, not black, Indian, white, Afro-centrist, nobody except that Syrian man.”

Mario Sabga-Aboud later apologised for his comments; some found the mea culpa “gracious” while others interpreted it as damage control. His cousin, businessman Gary Aboud, issued a statement distancing himself and other members of his community from the views expressed in the “Parts Unknown” episode. Esteemed senior counsel Martin Daly, in a post for Wired868, said:

Mr Sabga-Aboud has commendably expressed regret for his boast but his apology for boasting about having power does not alter the fact that the power is held.

Now we need to ask the political leaders if their leaderships are captives of the power, which Sabga-Aboud has confirmed, and if they are also captives of the power that others have derived from the dangerous intersection of business and politics within the grubby state enterprise system.

Some netizens, however, didn't see what all the fuss was about. Blogger Darryn Boodan contended that the statements of Sabga-Aboud and George were nothing that people weren't aware of, arguing:

The public furor over Mr. Bourdain’s show has ironically helped to showcase the real dish Trinbagonians love to sink their teeth into; racial resentment, with a helping of victimhood and economic conspiracy theories. There has been little rational conversation had about how racial minorities like Mr. Sabga-Aboud view themselves in relation to Trinbagonian society. As history has shown us countless times, it is not unreasonable for racial minorities to be concerned about their safety if they are viewed with suspicion and scorn. But rational conversation is as appealing to Trinbagonians as low fat doubles. So instead, most of us used Mr. Sabga-Aboud’s off the cuff remarks to simply reinforce the stereotypes and prejudices we already hold about the Syrian community.

He suggested that “the inequality that exists in Trinidad and Tobago is not rooted in one group taking away from another. It’s due to decades of bad government policy which has killed private entrepreneurship, breed dependency on the state, and facilitation of criminal gangs via corrupt make-work projects.”

The blog Poor Boys Paper talked about inequity, saying, “Growing up with limited means in a country where wealth is very much present is like working in a five star restaurant in which you never get to eat.” The post continued:

Several social media users were thankful that the comments jumpstarted a discussion that is long overdue in Trinidad and Tobago. In a letter to Wired868, Dr. Emir Crowne wrote:

Sometimes it takes an outsider to remind us that we have more in common than we think. For too long we have been divided along racial and even religious lines. And we allowed it to happen. Bourdain […] remind[s] us that food unites us. It is part of a common (albeit recent) cultural heritage, that we can, and should, use to rebuild and unite a fragmented society.