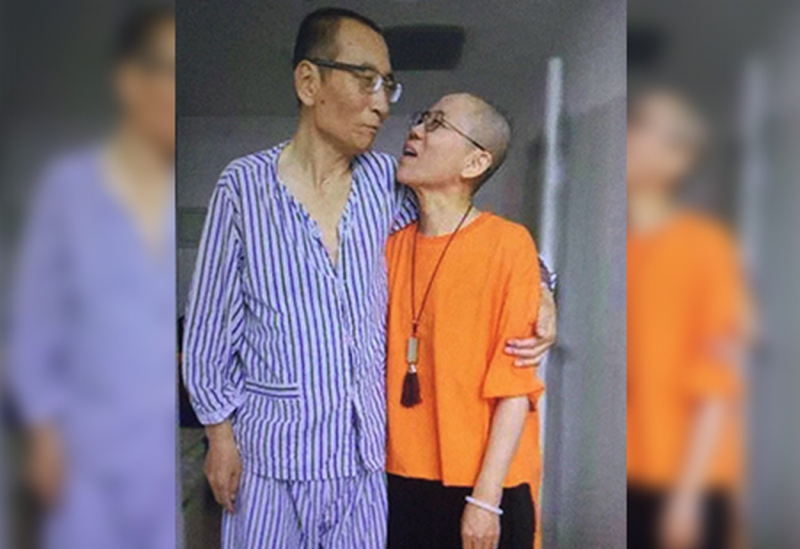 A photo of Liu Xiaobo and Liu Xia, believed to have been taken recently.

This story originally appeared on Hong Kong Free Press on July 8, 2017. The version below is published on Global Voices as part of a partnership agreement.

The case of jailed Chinese dissident Liu Xiaobo has attracted the attention of the international community after his lawyer revealed in late June that he had been hospitalized with terminal liver cancer.

Liu was sentenced to 11 years in prison in 2009 for “subversion” after drafting Charter 08, a manifesto calling for democratic reforms in China. He was awarded the Nobel Peace Prize for his work in 2010.

China’s Foreign Ministry has called Liu’s case “an internal affair” and a spokesperson said he did not see “any need to discuss it with any other country.” But China continues to face calls from the international community to release the Nobel laureate and his wife, poet Liu Xia, or allow him to receive treatment abroad.

Whilst some countries have criticised Beijing’s treatment of the couple, others have evaded the topic. Hong Kong Free Press has gathered some of the international reactions.

The UN’s high commissioner for human rights, Zeid Ra-ad al-Hussein, met Chinese officials at the end of June to discuss Liu’s case. But a spokesperson declined to comment as to whether the UN was pushing for Liu to be treated abroad.

China froze diplomatic ties with Norway after the Nobel Peace Prize was awarded to Liu in 2010, although the Norwegian government said it had nothing to do with the decision. Diplomatic relations were only resumed in December last year, and Norway signed a deal to resume salmon exports to China in June, as exports had remained largely blocked since 2010.

After news broke that Liu was seriously ill, the Norwegian Nobel Committee expressed hope for his unconditional release and invited him to visit Oslo to receive his prize.

He was unable to collect his award as he was imprisoned. At the ceremony, Liu was represented by an empty chair.

On July 6, the European Parliament passed a resolution asking China to immediately release Liu and his wife from house arrest and allow him to seek medical treatment wherever he wishes.

At the same time, we expect China to remove all limitations on the movements of Mr Liu’s wife and family members. They must be able to meet and receive visits from whomever they desire, and be able to freely communicate with the outside world.

US Ambassador Terry Branstad has said that Americans “would like to see him have the opportunity for treatment elsewhere, if that could be any of help.”

A US embassy in China spokeswoman, Mary Beth Polley, told AFP on June 27 that the embassy was calling on the Chinese authorities to not only release Liu but also to release Liu Xia from house arrest.

The embassy’s remark prompted an angry response from China, with its foreign ministry saying that “no country has the right to interfere and make irresponsible remarks on Chinese internal affairs.”

Polley said China should provide the couple with:

protection and freedom such as freedom of movement and access to medical care of his choosing, to which they are entitled under the Chinese constitution and legal system and international commitments.

US Senators Marco Rubio, Jeff Merkley, and Ted Cruz have also introduced a resolution in Congress to urge the Chinese government to unconditionally release Liu and his wife.

I call on China to unconditionally release Nobel Laureate #LiuXiaobo so he may seek proper medical treatment https://t.co/TgQoKb2CKF

German government spokesman Steffen Seibert said on July 3 that Berlin hopes Liu will get “all the medical support he needs” and that a “humanitarian solution for Liu Xiaobo should be the highest priority”.

Chinese President Xi Jinping appeared at a G20 summit in Hamburg on July 7 and 8. Diplomatic sources in Beijing previously told Reuters that China has been nervous that concerns over Liu could overshadow the visit.

Canadian Ambassador John McCallum urged China on June 28 to ensure that Liu receives suitable medical care and is reunited with his family. Liu’s lawyer previously told AFP that Liu’s wife Liu Xia is able to visit him every day, but police are always posted inside the hospital room, and Liu is not able to contact anyone in the outside world, including his lawyers. McCallum said in his statement:

Canada calls on China to uphold its international human rights obligations, including freedom of expression, and to release those imprisoned for exercising those rights.

France’s foreign ministry called on China to free Liu for humanitarian reasons in a statement on June 29:

All necessary measures must be taken to ensure that Liu Xiaobo receives all the treatment he needs where he wishes and that his wife and family are able to have access to him.

Though France Info previously reported that the French government would welcome Liu, the foreign ministry said it had no further comment on whether it would host him.

Taiwan’s Mainland Affairs Council urged China on June 27 to free Liu and show greater tolerance toward those who use peaceful means to call for political reform and democratic development. Taiwanese lawmaker Yu Mei-nu, of the ruling Democratic Progressive Party, also urged China to allow the ailing intellectual to go to Taiwan for treatment.

Tibetan spiritual leader the Dalai Lama expressed his concern for Liu in a statement on June 28, saying that many have asked him to pray for Liu’s well-being. He said of Liu:

It is my belief that the initiatives he took, and for which he has been severely punished, would have led to a more harmonious, stable and prosperous China, which in turn would have contributed to a more peaceful world. I was personally moved as well as encouraged when hundreds of Chinese intellectuals and concerned citizens, inspired by Liu Xiaobo, signed Charter 08 calling for democracy, freedom and rule of law in China.