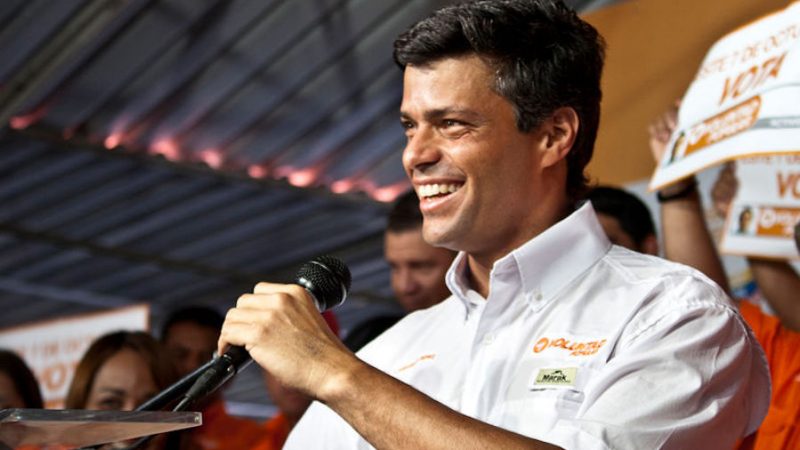 In an unexpected turn of events, Venezuelan opposition leader Leopoldo López was moved from the Ramo Verde prison and placed under house arrest. López was serving a 14-year long sentence for ‘inciting violence’ during the 2014 protests, a charge he has always denied.

The series of protests that took place in 2014 was a response to the economic crisis and high rates of urban violence that have dominated the landscape in Venezuela in the last years. The attempted rape of a university student inside the campus in the city of San Cristóbal sparked the first protests that then extended to neighboring cities after being met by government's repression.

The number of victims has been contested, but both international and local media calculate over 40 people being killed during the protests with hundreds more taken to prison.

Public reactions to López's house arrest are mixed. Some viewed it as a victory over the government, some international media outlets reported it as a crucial change in the course of the crisis, and some observers from the international community welcomed it as a step forward towards negotiation.

For many opposition leaders and followers, however, López's return to his family is no victory. López will still have to serve out the rest of the 14-year sentence, which has been widely criticized. His conviction was based mainly on an analysis of his speeches by linguistics expert Rosa Amelia Asuaje who has claimed recently that the judge “manipulated her words”. This way, while many have celebrated the “liberation” of López on Twitter, others advised the public to be more careful:

Leopoldo López will not be used as a bargain chip. He's home, but both him and Venezuela are still captives of the regime.

Leopoldo López is not free. He's under house arrest. We should say things the way they are.

On collective site Prodavinci, analyst Luis Vicente León elaborated on the different reasons he thinks that might behind the government changing López's status. According to León, the government seems affected by the current protests and by international pressure, something that seems to have opened a way to establish a dialogue, even if its results might not be welcomed by everyone:

There is, no doubt, an opportunity for negotiation. A negotiation that will ask for concessions, and that will not be popular among any of the extreme groups. I'm talking about a negotiation in which both parties are recognized and spaces can be opened without putting on the table an existential conflict. A negotiation that can make the country able to take back the constitution as a necessary guide. A negotiation that can show the way towards political coexistence, in a country without political prisoners and full liberties, with a clear horizon that can be accepted by everyone, and with free, transparent elections through a universal, direct and secret vote.

According to Luis Almagro, president of the Organization of American States, López's house arrest is just a first step. The list of political prisoners, especially since the beginning of the protests, is still quite high. As journalist Laura Weffer writes:

The list of those still behind bars is long and unfair. Taxi drivers, carpenters, bank employees, students, military personnel (men and women). In the majority of the cases there's not even a sentence. For diverse reasons, they're all considered political prisoners, according to the list of [the organization] Foro Penal.

Weffer's article summarizes the long list of people who have been put in jail in the last years and also during the protests of the last three months. According to NGO Foro Penal, there are 431 political prisoners in Venezuela and 346 of them were imprisoned during protests. In many of the cases, the legal background can be messy and confusing, with little hope of release. Other cases, like that of Juan Pablo Giraldo, include first-person accounts of their lives in prison:

My life has changed drastically. I've had very difficult times in this two years. I don't lose faith in obtaining justice and be freed to go back home to [the city of] San Cristobal; and not only for me, but for the rest of the political prisoners. […] I share with other political prisoners, even if I had never met them before. They've become family. When I arrived at El Helicoide [the prison], they welcomed me and they helped me with generosity. Now I follow the same example. I help those who keep arriving because of political persecution…

Human rights organizations have denounced torture inside prisons and the use of military courts and prisons to judge and detain civilians. At the same time, the number of victims killed during the protests that started in April 2017 is not clear. The interior ministry has recognized 70 killed, while independent media like “Efecto Cocuyo” has counted around 94 people, with thousands being wounded and hundreds sent to prison.

Follow our Venezuela special coverage with more articles about the latest developments in the country.