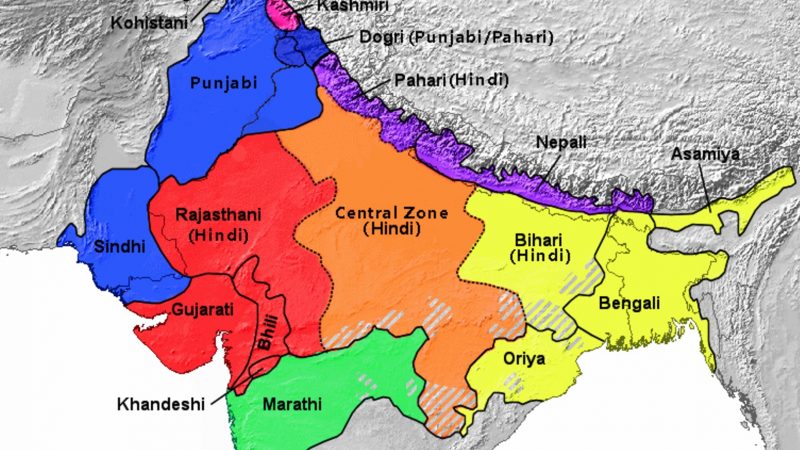 Major Indo-Aryan languages in India. Image by Filpro via Wikimedia Commons. CC: BY 3.0

According to the Indian Constitution, the official languages of India might be Hindi and English, but the complexity of having multiple states — just like the European Union — means that in practice, people speak many more than just these two languages.

There has been a massive outrage against the ruling nationalistic and conservative Bharatiya Janata Party (BJP) because of its enforcement of Hindi over other state languages. The recent announcement by Sushma Swaraj, Union Minister for External Affairs, about the use of Hindi in passports, has pushed this outrage even further. While Swaraj has attempted to simplify the otherwise cumbersome passport application process, she has been heavily criticized for imposing Hindi upon 60% non-native speakers that do not understand the language.

All passports will be in English and Hindi languages from now on and not just Hindi: EAM Sushma Swaraj in Delhi pic.twitter.com/xG6ThKMgTT

Though the last known census in 2001 lists 41.1% of India's 1.27 billion population as Hindi speakers, 16% of these speakers speak languages that are related to Hindi but are identified as languages in their own right, which brings down the number of Hindi speakers to about 25%.

Promotion of Hindi has been one of the BJP's major agendas, since 70% of its parliamentary members belong to regions where Hindi is spoken. Garga Chatterjee, a blogger at Indian news media Scroll.in, argues that Swaraj does not fully represent Indians, but rather, only those that speak Hindi:

Thus, when Swaraj says ‘why can’t we make it Hindi?’, the ‘we’ does not stand for all Indian citizens. ‘We’ are the Hindi-speaking citizens of the Indian Union. By equating that minority with the rest of us, she obliterates any stake the rest of us, the majority, have in any idea of ‘we’.

Chatterjee also tweeted, complaining that Swaraj blocked her right after she wrote the blog post opposing the decision:

A large number of netizens have commented, both in support of and against this decision.

Blogger Priyodorshi, who is also a lawyer at the Supreme Court, tweeted:

If a Hindi passport is shoved down my throat, I demand one in Bengali too! Why nt have all official languages on the PP?

It's ridiculous. Why should it be in Hindi? Honestly, I don't think we can find common ground.

Vis the hashtag #StopHindiImposition, many from the non-Hindi-speaking states have raised their voices against this decision, as well as several other decisions taken by the union government of India for their proactive addition of Hindi in governance and other official work:

We are not saying no to hindi in passport. Question should be why "only" hindi #ServeInMyLanguage #StopHindiImpostion

Dear Hindi speakers if English is a foreign Language for you. The same is Hindi for South Indians. #StopHindiImposition

Then why not our own Kannada in the passport ?

Why Hindi in a Kannadiga's passport but not Kannada?

People in Karnataka have already been protesting against the use of Hindi in NammaMetro, the city's metro train service in the state capital, Bengaluru. Twitter user Aditya Mani Jha, who seems to be a Hindi speaker himself, has also questioned the usefulness of Hindi in a document like a passport, which is predominantly used for international travel:

So far, nobody has given me an answer to that, so I am asking again: How does Hindi on passport make international travel easier?

Sebastian Amudhan, an Indian filmmaker and lyricist from the state of Tamil Nadu, shared a tweet with a fictional video that shows India's prime minister calling a Tamil-language speaker and speaking in Hindi — and the latter disconnecting the call, explaining that he does not understand Hindi.

The agitation over Hindi being imposed in non-Hindi states dates back to the formation of India in 1947. Hindi rose as a lingua franca in the early 1950s thanks to a political movement known as the Indian National Movement. It was part of the leadership of the collective Indian National Congress, charged with bringing some of the former British colonies of South Asia together as the Indian State.

However, it was opposed via demonstrations both before and after the formation of the State, most noticeably in the area that is present-day Tamil Nadu. Those protests cost a few hundred lives, and led to the decision of not mandating Hindi as part of the education curriculum for children in Tamil Nadu. It also helped bring the “virtual indefinite policy of bilingualism” into existence, which in turn led to the declaration of both English and Hindi as the official languages of India.