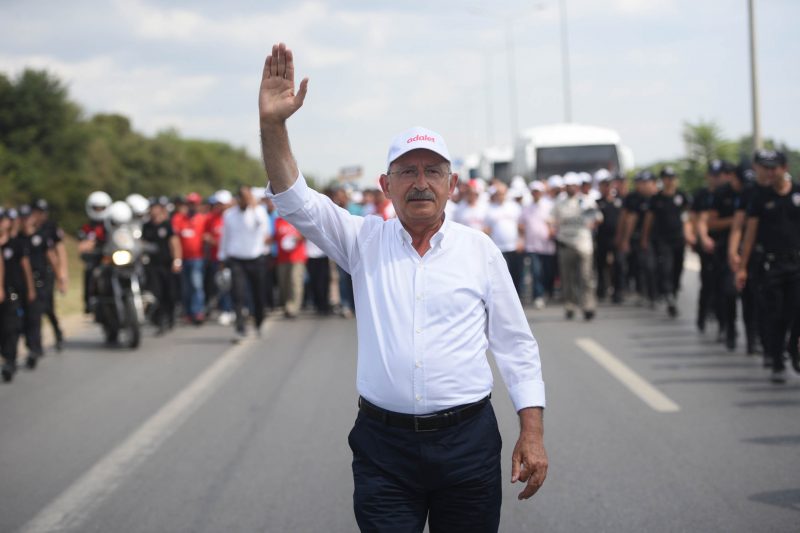 “If we’re going to have a true democracy, we have to start with justice,” said Turkish Republican People’s Party (CHP) member of parliament Selin Sayek-Böke.

Sayek-Böke was speaking to an interviewer from the BBC while participating in the 432-kilometre Justice March from Ankara to Istanbul called by the CHP’s leader Kemal Kılıçdaroğlu in response to the jailing of one of the party’s MPs, Enis Berberoğlu. Berberoğlu was jailed for 25 years for leaking footage of Turkey’s MIT security agency sending trucks full of weapons over the border to Syria. The March, which, according to Kılıçdaroğlu, has attracted around 40,000 protesters, is due to end on Sunday, July 9 at the Istanbul prison where the lawmaker is being held.

‘I talked about our #JusticeMarch to @BBCNews. It was literally a breathtaking interview.’

The accusation that Turkey’s government lent material support to terrorist groups in Syria is one about which the ruling Erdogan administration is particularly sensitive. It is one of the main reasons the administration decided to block Wikipedia entirely in May, after two articles appeared on the site mentioned Berberoğlu’s leaks while he was the editor of Hurriyet newspaper in 2014.

President Erdogan’s ruling Justice and Development Party (AKP) would appear to be in an unassailable position, having won every election since coming to power in 2002, including the constitutional referendum in April 2017 to change Turkey’s politics to a Presidential system that would allow Erdogan to remain in charge until 2029.

Yet the CHP’s Justice March and its obvious symbolism have rattled leading figures in Erdogan’s party. Prime Minister Binali Yildirim said “it is starting to taste sour. It is time to end it,” while Erdogan himself accused the marchers of being allied to the Kurdish PKK militia and Fethullah Gülen’s religious movement—the group the AKP accuses of instigating last year’s 15 July coup attempt. Erdogan has frequently associated his political opponents with terrorism in the past.

“This [#JusticeMarch] started tasting sour, it is time to stop it”
PM Yıldırım pic.twitter.com/2VlTZfOStD

Perhaps a key objection is the appropriation of the word Justice—”Adalet”, a core element of Erdogan’s party name—to indicate that the perceived injustice is now coming from Erdogan’s religious conservative movement itself. The AKP was founded as a moderate Islamic party seeking greater freedom of religion for the large number of conservative Muslims who were previously discriminated against in areas of public life such as courts and universities. But now these restrictions no longer exist, this aspect of the conservative platform has lost its meaning. The party itself has become less moderate, as it seeks to expand the influence of political Islam into education, the courts, and the military. 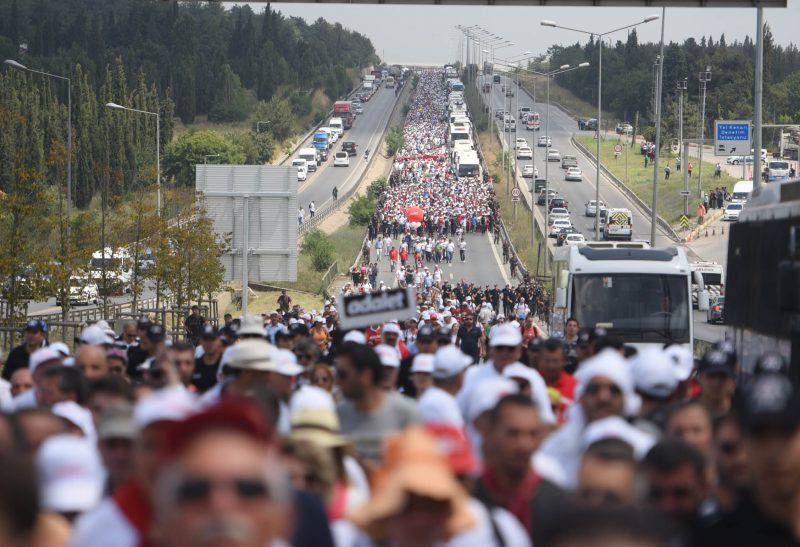 Another symbolic aspect of the march is the comparison of its leader Kılıçdaroğlu to Gandhi. Kılıçdaroğlu is often physically compared to Gandhi, and the latter’s 1930 Salt March against unfair taxes imposed by the British eventually led to India’s independence from British colonialism. For many, the Justice March represents new and exciting shift in tactics by the CHP, who have previously been cautious about overt displays of direct action to challenge the government.

Among 1000s at Turkey opposition's #JusticeMarch is a visually-impaired man: Walked 400 km so far!
Via @tugbatekerekpic.twitter.com/kvZEf9PhBn

But as the political situation in Turkey has worsened, few other groups besides the CHP are in any position to resist. In recent months, MPs from the pro-Kurdish HDP party have been imprisoned, along with hunger-striking teachers, journalists and hundreds of others accused of participation in banned organisations, sometimes for offences as minor as opening an account at a bank affiliated with Gülen’s Cemaat movement. Even members of Turkey’s local Amnesty International branch were arrested in the middle of a human rights training session they were holding. This is especially ironic, as Erdogan had once been adopted by Amnesty as a Prisoner of Conscience in 1998, when he was briefly arrested by the Turkish government on accusations of stoking religious violence by reading a poem at a rally.

In 1998, @amnesty adopted @RT_Erdogan as a prisoner of conscience and campaigned for his release. Now he jails its director and chair pic.twitter.com/1D6bL4CHor

The CHP’s previous inaction had led to criticism that Kılıçdaroğlu was weak and ineffective, a charge that seems less credible the more AKP criticises the Justice March, which will end in Istanbul on Sunday with a large rally.

So far, a number of people have had heart attacks while participating in the 432-kilometre journey from Ankara to Istanbul, and AKP supporters have tried to disrupt the protest, one going as far as to dump a truckload of manure in front of the march.

However, as the number of participants has increased to the tens of thousands, the March seems to have taken on greater momentum. Among the protesters is a man who looks surprisingly like a shorter double of Kılıçdaroğlu, who one Twitter user jokingly referred to as his ‘powerbank’.

‘Kılıçdaroğlu carrying his powerbank with him’

The marchers were even joined by members of the pro-Kurdish HDP party, with whom the CHP has historically had a less than friendly relationship. In May 2016, CHP representatives voted with the government to support a bill that would allow MPs to be stripped of immunity and allow the government to prosecute them. As a result, 13 HDP MPs and countless other officials have been jailed.

The CHP is a nationalist party that would not easily speak out against the jailing of Kurdish politicians; but now that the prosecutions have reached its own MPs, it has found that many other groups are willing to follow its critical lead. The challenge now is to keep that opposition unified.

On the 19th day of the “Justice March” Turkey's 2nd main opposition party, the HDP, has joined the march & called on justice for all people. pic.twitter.com/KQPxbkj2RT

The march reached Istanbul on Friday, 7 July and will culminate in a big protest rally over the weekend. At the moment, there do not appear to be any specific proposals from the CHP about what its next steps will be. CHP MP Selin Sayek-Böke has said that “We need to achieve what we couldn't do following Gezi and 16 April [the date of the constitutional referendum], we need to show the decisiveness that would bring the energy of the social opposition to politics.”

In an interview with CNN Turk, Kılıçdaroğlu said that the result of the march is that people have overcome their fear of speaking out against the government. What remains uncertain is how the AKP government responds to the voices raised against it. But if the CHP can galvanise the anger of many groups who feel marginalised and fearful of the state, it could lead to greater success for the party in the Parliamentary and Presidential elections which are both due to be held in 2019.