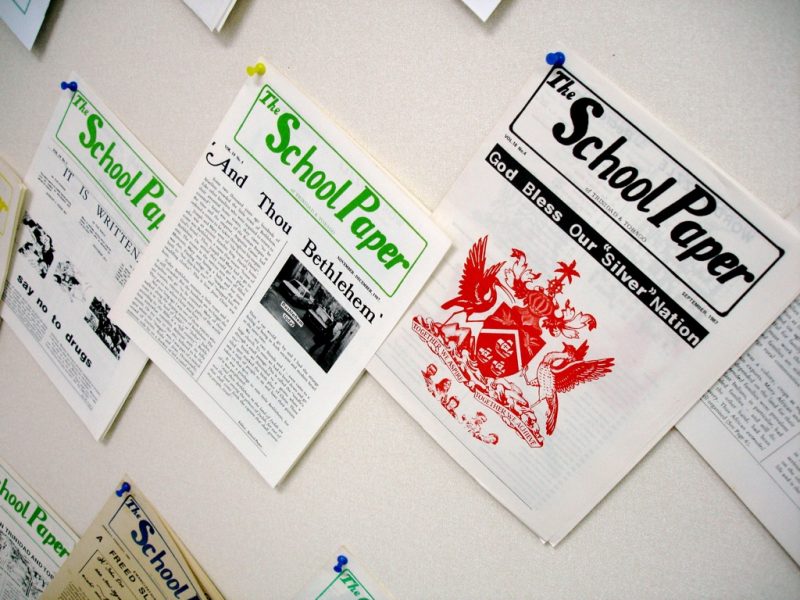 Material for an expo by Trinidad and Tobago's Ministry of Education. Photo by Colin Campbell, CC BY-NC-ND 2.0.

On July 4, 2017, parents across Trinidad and Tobago were anxiously awaiting the results of an examination that would determine which secondary school their pre-teens would attend for the next five years. The Secondary Entrance Assessment (SEA) exam, which was introduced by the education ministry in 2001 as a replacement for the Common Entrance exam, is essentially the same as its predecessor: a placement test.

Trinidad and Tobago touts itself as providing free universal education for all, but in reality not all schools across the country are equipped with the same level of facilities or trained staff. Schools are also not zoned, so there is great pressure for children to gain entrance to “prestige” schools, not necessarily close to their places of residence, in order to secure a solid secondary education. From the ministry's point of view, this may be a practical consideration—there are supposedly more children leaving primary school than there are secondary school places, hence the need to stream children academically. But the fact that all youngsters who sit the exam are placed in a school blows a hole in that argument.

The examination ends up being a mechanism through which students who test well end up at better schools. Social class and connections are also a factor. Parents have been known to pull strings in order to get their children into schools of their choice.

Every year, parents complain about the test and call for the ministry of education to do away with the exam, but nothing changes. A former employee of the ministry explained it this way: “If they decided on zoning, it would mean that a whole lot of schools would need work to get them up to standard across the board. Which parent would be prepared to sacrifice their child by having him or her attend those schools while the upgrades are being made? I can't name one. And that's exactly why the SEA exam will continue to exist.” This despite the fact that the Inter-American Development Bank (IDB) has expressed concern that “the Caribbean and Latin America was the region with the largest learning gaps, while pointing out that children from wealthy families were learning a lot more than those from lower socio-economic families.”

Educator Patrice Cox-Neaves told Global Voices that in the mid-1990s, the then Chief Education Officer, Dr. Claudia Harvey, created an education plan that involved assessment of children's portfolios by a panel of independent subject experts at different stages of their school careers. If, at the Standard 2 stage (8 years old), there were learning gaps, children would be kept back and given access to remedial courses. Their coursework in Standards 3 and 4, the years when academic pressure for the upcoming exam usually starts to build, would account for 40%, while their Standard 5 portfolio—the year they sit the exam—would account for 20% of their final assessment. The three secondary school choices each child is currently allowed would remain, except that two of the three schools would be in the area of residence. Dr. Harvey's plan was designed to render the exam obsolete within five years, but it was never implemented.

More than 20 years later, the debate continues. After the 2016 exam, writer Nazma Muller mused on Facebook that:

An education system that rewards a few at the expense of the rest—at the age of 11—is not about education at all; it's about divide and conquer. Until the day ALL our children – even the disabled – have access to a relevant, empowering education that will liberate their minds and prepare them for real life, we must fight to dismantle this oppression and divisiveness.

The 2017 exam attracted further ire from social media users because of an error on the test that caused students great mental anguish. By the time the results were about to be released, both family-oriented websites and well-intentioned Facebook users were posting advice to parents about how to deal with the results. It was later revealed that more than 2,000 students scored less than 30% on the exam, calling into question the efficacy of the education system's ability to create critical thinkers.

i hope these poor children are able to survive this irrelevant 19th century education system. i almost didn't. they have my utmost sympathy. i am lucky to be still alive. come to think of it, maybe i did not survive.

Fire bun SEA. Elitist, divisive child abuse. Fifty how much years after independence and we still on this shit?

There was a lot of talk online about the SEA's elitist tone. Artist Dave Williams said:

A SUPERIORITY COMPLEX IS AS AWFUL AS SHAME. SEA season has provoked a lot of talk about the shame of the kids who didn't do all that well […] The shitty thing about the system is that we don't seem to see the equally destructive superiority that we inculcate in the ‘successful’ children. […] Our Exhibition (pre-CE), Common Entrance, and now SEA have been successful at ensuring that we're all deeply damaged one way or the other and that our society will never escape classism, inequality, and credentialism or a status quo from which none of us are escaping unscathed. Nevertheless, people have been acknowledging that the system causes shame – powerful shit causing kids to feel that they are inside themselves wrong, inadequate, and not good enough – scars-for-life shit – but we keep it in place because we either are or wish to end up on the ‘good’ side of it. This country has had too much money for us to be putting ourselves through this over and over again.

Every year, at this time, I post words of grief regarding the SEA and the damage it does to our society. But I think it's important for me to face some realities. The SEA is there to line us up in order in the class and status system. It's just part of a system that does this. Even if we got rid of it tomorrow, saving children from the deep damage which it causes in probably 75 percent of the national population, it will change nothing unless we change the idea that ‘some people are worth more than others.’ Most of us in TT believe this. Some people are worth more than others. The worthy get the resources and the unworthy don't. Most of your order in the line is predicated on where, in the line order, you were born. It includes skin color, hair texture, family financial resources, neighborhood, education level of parents, etc. You know the drill. And a few people, very few, who have a specific skill set or combination of circumstances, are allowed to shift their place.

While some social media users were grappling with the big picture and its daunting effects, others took a more practical approach.

Fulbright scholar Lesley-Ann Noel thought it was time for action:

Parents it's time for us to develop strategies to boycott and get rid of this classist exam! #civildisobediencetime

Criminologist Renee Cummings was concerned about the tradition of publishing the results in the newspapers, in light of the problem of escalating crime:

Publishing SEA results in the newspaper is a major safety/security risk. The entire country has access to such private information. That concept has outlived its usefulness, if it ever was useful. Does the Ministry of Education secure a release from parents giving permission for the name of the child and the school to be published? I find it most irresponsible and it needs to stop. Back in 50s, 60s, 70s, it was probably a big thing or a proud moment for the entire village or community to see a child's name and ‘achievement’ in the newspaper. For the child who didn't live up to expectations, it was certainly a public shaming. But in these high crime times, it is not safe.

It is at this stage especially that the gap begins to widen between kids who have access to prestige education, and those who now gamble with the chance of going to a school that is not considered prestige, but may have dedicated teachers, or worst-case scenario… not-so-dedicated teachers. And I don't say this to be a killjoy, but to make us all aware of the societal gap that widens between the child who made 91 and 95 and the child who made 83 and 60. We all have made those types of grades – or worse – at some point in our lives, but at junctures like these kids feel it in different ways.

Depending on where they go, expectations may decrease thereby decreasing children's output. It is even moreso now that our kids need our support, dedication, and encouragement. We must sit and read with them, supervise their schoolwork, and investigate the quality of education at school and at lessons. Let teachers know that we don't play with our kids’ education. Fire lessons teachers who are doing minimum for maximum pay.

Our Government and our Ministry of Education are not doing anything to ensure that our kids are inspired and empowered in schools. So we must do it. […] I hope our future generation will be bolder than us, and create the change that we have failed to create. But they need us to place that seed in them first.