The "Ghetto President" now has a chance to shape policy. 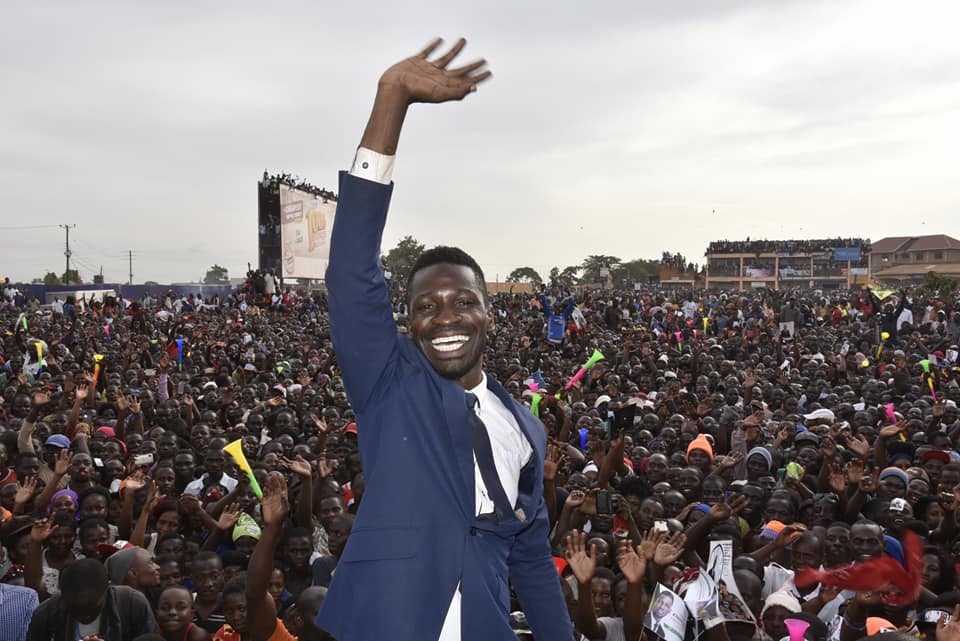 Bobi Wine at one of his rallies. Photo courtesy of Bobi Wine's official Facebook page. Used with permission.

Following a high-profile election campaign that culminated in his arrest at his final rally, Ugandan pop star Robert Kyagulanyi Ssentamu, famously known as Bobi Wine, is now officially a politician.

Wine is not new to activism. His music has for a while been focused on social justice issues. But singing about policy issues is not enough. On 29 June, he finally crossed the line to become a policy maker after securing a parliamentary seat in Kyadondo, winning 75% of the votes in a by-election.

One of his more popular songs, “Ghetto”, talks about police brutality against people residing in the slums of Kampala and the inadequate services that delivered to them.

Wine refers to himself as “The Ghetto President” and “Omubanda Wakabaka,” loosely translated as “The King’s Gang Star”. He is the fifth person from the country's art fraternity to go into politics, following in the footsteps of Ali Ndawula Wowoto, Sulaiman Madada, Judith Babirye and Kato Lubwama, who now serve as members of parliament.

His campaign was characterized by music, with large numbers of musicians, radio personalities and TV presenters turning up and using their social media accounts to push his message to the electorate, employing the hashtag #BikwaseKyagulanyi, which means “hand over everything to Kyagulanyi”.

At his final rally, he was arrested by the police, who alleged that Wine was holding the gathering in a wrong venue close to where President Museveni was campaigning for his candidate. The video below by NTV Uganda, a local broadcaster, shows him being detained. He pleads with the police, saying he is fighting for people's rights.

Nevertheless, he won the by-election handily. He secured 25,659 votes, defeating Sitenda Sebalu, the ruling NRM party candidate, who only received 4,556 votes. Wine's platform focusing on unemployment and other issues that affect youth, who he believes are misrepresented, captured huge amounts of support.

After he was announced as the winner of the election, he tweeted to his 28,000 followers that something profound has happened in Uganda's electoral politics.

THE PEOPLE HAVE SPOKEN
This 29th day of June marks a turning point in the politics of our country! History has… https://t.co/4cIbj3mHXu

Ugandans took to social media to congratulate the 35 year-old celebrated artist on his election into Parliament. The list of supporters included politicians, musicians and ordinary people on the media platforms.

A few hours before the electoral commission announced the results, NRM Secretary General Justine Lumumba tweeted his message of congratulations:

And Kizza Besigye, the first runner up in the 2016 presidential campaign, also came out to applauded Bobi Wine's victory; Besigye never campaigned for him as his party had fronted another candidate in the election:

When we believe, We Achieve.
Congrats to Hon. Robert Kyagulanyi,Family,Friends and Kyadondo East for the remarkable victory .
Leaders are chosen by God.So, May he guide you as you deliver Kyadondo East to the promised Land.

Fellow musicians Radio and Weasel also thanked Bobi Wine for his efforts towards giving the poor a voice through his music and now in politics as well:

You Have Brought The Ghetto UpTown. Congrats Broda Bobi Wine

In the past, Bobi Wine was known for the use of marijuana and beefing with fellow musician Bebe Cool. Yet the people of Kyadondo East were willing to overlook those things and elected him to parliament. The challenge for him going forward is to ensure that he works hard to catch up to his fellow parliamentarians that have been in the legislature for more than a year and deliver on the expectations of the people he represents and the country at large.