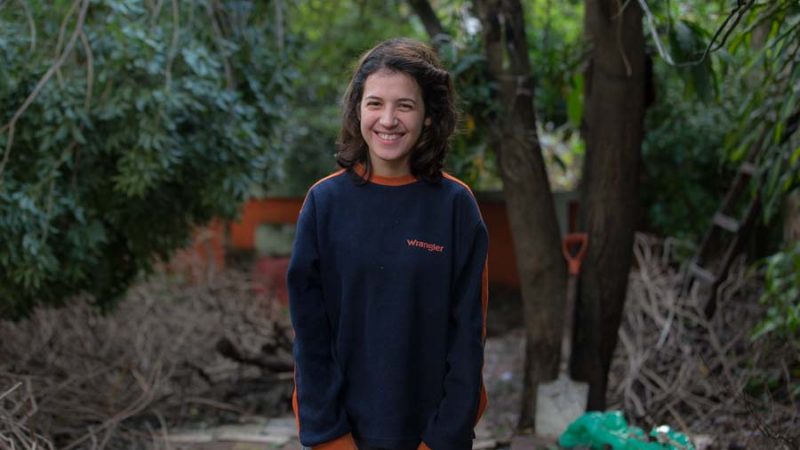 While attempting to obtain a psychology degree, Cristina Moreno Re (25) works in a store, which requires her to be away from home also during the weekends. Photography by Juan Carlos Meza, used with permission.

The following is a republication of a portion of the series #PaísDeLasMujeres, part of a Global Voices partnership with Kurtural.

Clara Guillén was refused the opportunity to take a test at a law school because she took her young daughter to the campus with her. “Come to study when you have finished raising your children,” Concepcion Sanchez, a professor at the National University of Asunción (UNA) told her that day.

In May 2016 Bethania Ruiz Díaz, a student at the same school, endured a similar fate when she went to class with her baby who was only a few months old.

María de el Mar Pereira, the teacher who sent her away, told her:  “[This] is not a nursery, but a university.” She added that she should find someone to leave her son with.

“I could not answer because it left me stunned, I felt powerless and denigrated,” says Ruiz Diaz.

Nowhere to turn but home

Although the professors changed their positions when the cases were made public, Guillén and Ruiz Diaz, like many other college-student mothers, still face a system that discriminates against mothers who want to study on a daily basis.

The fate of the two mother-students caused the faculty’s students center (CE) to push for the creation of a day care facility, but the proposal was not accepted. According to Alejandro Koopmann, a member of the CE, the project sputtered when President Horacio Cartes vetoed the necessary budgetary expansion, along with the rest of the general budget, in 2017.

Despite the growing participation of women in the labor market in Latin America, their historically assigned roles as carers of children and household labourers has remained unchanged. If not mothers, then it is grandmothers, aunts or sisters who do the region's “unpaid work”.

According to a survey carried out by the General Office of Statistics, Surveys and Censuses (DGEEC), Paraguayan women dedicate more than half of their time to family care and household work, even more than in countries such as Argentina and Uruguay.

“The idea that paid work might release a woman [from caring responsibilities] has not yet occurred,” said Silvia Federici, a writer and feminist activist, in a recent interview with El Diario.

“Women now have two jobs and much less time for things like taking part in social and political movements,” she says.

Or studying, for that matter.

Cristina Moreno Re, age 25, is a fourth year psychology student at UNA who also works as a salesperson in a store and is the mother of five-year-old Gaspar.

“Taking care of children is a tiring and energy-consuming work,” she says. But in the eyes of their coworkers, “women cannot get tired of taking care of our children.”

She works a 42-hour week on average, while care for Gaspar is mostly divided between her mother, and the mother of Gaspar's father, from whom she is separated.

She thinks herself lucky. Since Gaspar began kindergarten she has found a schedule that works for the entire family, and can still take him to school every day. This is a privilege in Paraguay, where only three out of ten children have access to pre-school education.

Perhaps most importantly, the fact that Gaspar is going to kindergarten also allows her time to finish her degree. But at the National University of Asunción School of Philosophy there are no alternatives  for mothers of young children.

“Faculty usually allows for children to stay in the classroom. Every year demand for daycare [grows], but the [administration] always argues there is no budget for it,” says Jazmin Colonel, the Vice President of the Student Union for that University.

Although there is no data on the number of students who drop out of school to fulfil their childcare responsibilities, Colonel says that many do so.

The situation of student-mothers at private universities is actually no different. Cristina’s 24-year-old sister, Romina Moreno Re, attends a veterinary school at Columbia University in the capital city of Asunción.

She went into labour right after a school test. Giving birth to her daughter Alicia prevented her from finishing her tests.

“According to them [the provost at her University], it was too late when I applied for a delay [to have an extension],” she said.

Like Cristina, Romina Moreno also depends on her mother to look after her daughter, who is now 20-months-old.

“My mother works in a store […] If her or my sister cannot babysit my daughter, then my husband does. He watches her, but not as much as I do, which is 20 hours per day”, Romina explains.

Romina used to work organizing social events, but is only attending school currently. Motherhood has changed many aspects of her life.

If the access to pre-school education is limited, coverage of child care services, whether public or private are almost non-existent. The Secretary of the Children’s Office in the country says that it does not even have data on childcare services in the country.

The resonance of the events that occurred at the law school in UNA inspired a congressional bill that Representative Hugo Rubin initiated. The bill would force both public and private universities to allocate money for day care facilities, but it is still awaiting approval.

Since “the provision of child care has not yet reached the category of a societal right”, says sociologist Karina Batthyány, the greatest challenge is faced by women in the lower and middle classes, who often have to decide between work and attending school.

For mothers such as Bethania Ruiz, and Cristina and Romina Moreno, the traditional ‘chain of care’ — mothers, sisters and mothers-in-law — is the only form of support there is.