Marvel’s Queer Latina Superhero Prompts Praise, Criticism and Everything in Between 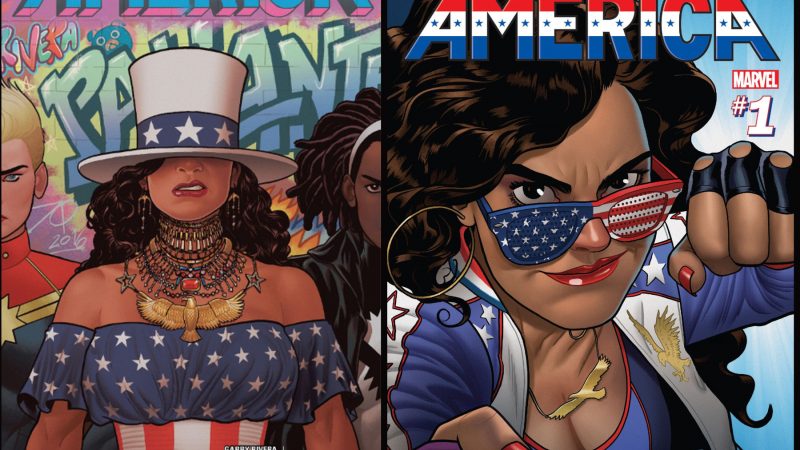 Many readers celebrated the news, saying the series will open up space for conversations about immigration, identity and sexuality, precisely at a time of high political and social tension in the United States.

Others, however, argued that the focus on identity came at the expense of the story.

The America Chavez series isn't just centered on identity, but also in the idea of self-discovery. According to the presentation on the Marvel website, America is not only a superhero who takes down bad guys, but also one that believes in education and one's own exploration: “What's a super-powered teenager do when she's looking for a little fulfillment? She goes to college!”

Ms. America Chavez. She is Marvel's only running female-led queer solo title and one of the only queer WoC to have had a solo title. (1) pic.twitter.com/FUIjHG3JI8

The series is written by novelist Gabby Rivera and illustrated by Joe Quinones, and it has called the attention of a wide array of online media devoted to both gay and Latino issues. As quoted in The Huffington Post, America Chavez’s authors wanted the book covers to be a mix of different cultural references with iconic “images from the Beatles to Celia Cruz […] We discussed folks who have tremendous impact on American culture while also existing at the intersection of many identities”:

America Chavez will not be the only character in the book with an intersecting identity,” Rivera said. “She will not be the sole representation of queer people and women and Latinas. There will be communities of folks all around her testing their super powers and finding strength within themselves. We’ve been very intentional with reflecting different body types and gender presentations. Our characters are black, Afro-Latinx, Asian, mixed and everything in between — like literally running the gamut of melanin, you know?

The author underlined how constructing the character also fulfilled the dream of seeing women “like her” in comic books: curvy and complex women of color.

‘Tell me a GOOD STORY with GOOD CHARACTERS!’

The story and the character, however, have not been free of criticism and controversy. The first issues have received some harsh reviews online, saying the series puts “gender first, story second.” Comments under some of the video reviews and articles about the series were critical of the writing and opined that elevating America Chavez’s sexual and cultural identity to such a degree is actually a disservice to the cause she’s trying to defend:

The dialogue was terrible, the Spanglish was racist (at best), the plot jumped around between various irrelevant points with little connection, the political commentary was a subtle as a sledgehammer, and there wasn't a single character with any sort of development (other than “random girlfriend whom the reader never gave a reason to care about broke up with the protagonist, in what might be one of the least realistic exchanges of dialogue ever written”).

The author is apparently hoping that “MINORITY LESBIAN YASSSS!!” will be enough to cover up for her complete inability to write either characters or plot lines, but this comic is so completely terrible in every aspect that I doubt she'll get away with calling everyone who points out its plethora of flaws “racist/homophobic”.

The complexities of representation were also widely discussed by some of the YouTube users, who claimed that putting certain elements of identity before anything else is not enough to make a reader identify with a character:

As a Latina myself, I am disgusted and insulted by America Chavez. I'm supposed to love and identify with this character? On what grounds? […] Why should I care about her or her story? Because she's a Latina queer? So what? That doesn't make her interesting. There are Latina queers all over the place here. That's not unique at all. […] I DON'T CARE if the main character of a comic is the same race or gender as me! Tell me a GOOD STORY with GOOD CHARACTERS! If the story and characters are solid and well written, then it won't MATTER what race, gender, sexuality, or creed that character is! Labels don't make a character. CHARACTER makes a character! And America Chavez has ZERO CHARACTER.

The YouTube Latino channel Pero Like (associated with BuzzFeed) also featured the character in their video “LatiNoticias” with its own biting analysis:

It's pretty fun that a character with the potential to excite so much hate from right-wing conservatives is literally named America. That's like if I named a new contraceptive Freedom Pills, or if her sidekick was a gender-nonconforming bald eagle. America Chavez was the third choice for the superhero's name after Marvel passed on “Uracis Ifudonlykme” [You’re racist if you don’t like me] and “Sue-Kit White Concervadores” [Suck it, white conservatives].