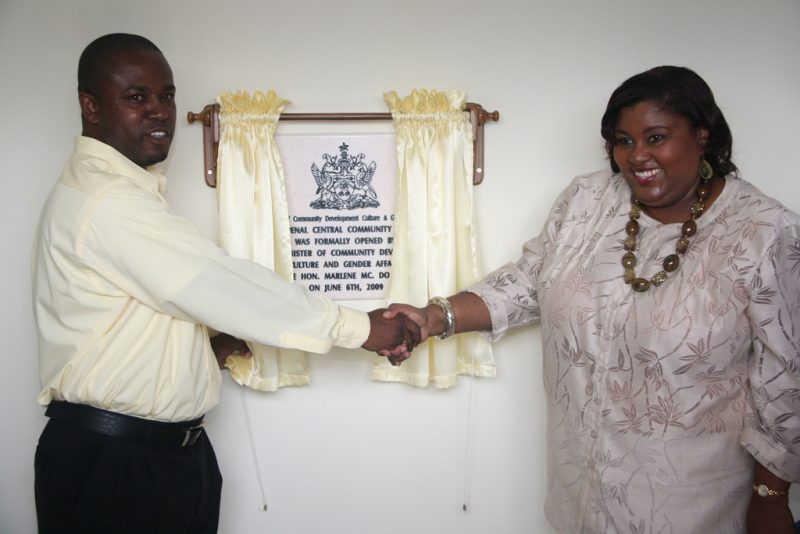 The hiring and subsequent firing days later of a politician as minister of public utilities has some people in Trinidad and Tobago cracking jokes and others grumbling about the questions of corruption and poor governance that her brief stint in the position raises.

Marlene McDonald is not a newbie to politics, but she became a household name in Trinidad and Tobago when, at the beginning of 2016, she was accused of nepotism at her constituency office, using her influence to secure state housing for her common-law husband and starting a fake non-governmental organisation (NGO) in order to access public funds.

Her actions were called into question under the tenets of the Integrity in Public Life Act — in fact, McDonald was still under probe by the country's Integrity Commission when she was sworn in as the new minister of public utilities on June 29, 2017, after a Cabinet reshuffle.

That alone left a bitter taste in the mouths of many netizens, but the cherry on the cake came when photographs of McDonald's swearing-in ceremony became public. One photo from the Trinidad Express newspaper soon began to be shared on social media sites, showing McDonald flanked by her partner and a “community leader” from her constituency. (In Trinidad and Tobago, the term is often used as a euphemism to describe gang leaders.)

McDonald's guest, Cedric Burke, had been arrested a few years ago under a state of emergency called by the previous administration, so Facebook users soon began to post updates that questioned “how an alleged criminal was allowed to enter President's House”. Burke has never been convicted of a crime.

The Office of the President subsequently said that it had asked Minister McDonald to submit a guest list for the swearing ceremony, at which point she asked for two extra invitations, but never provided the names of the additional guests. Upon their arrival, the guests were told that their names were not on the list, and that they were not properly attired. They were made to wait downstairs, but when McDonald arrived, she accompanied them upstairs and introduced Burke as her guest and constituent.

Following the faux pas, there was much discussion on Facebook and Twitter, with many calling for McDonald to be fired.

Ish Galbaransingh and Steve Ferguson are known financiers of the UNC [the United National Congress party, currently in opposition] and are currently facing the courts. Whether their shirts are tucked into their trousers or not, if they were to have attended the swearing in ceremonies of a UNC Minister people would automatically understand the picture it painted for a UNC Government, the Cabinet, Treasury, white collar crime and violent crime.

This is the central problem with Marlene MacDonald, Cedric Burke and President Carmona being in a photograph together: the lines between the powerful 1% and the criminal class are so blurred that we can no longer guarantee the integrity of our government and the safety of our Treasury.

Unless I am mistaken all three persons, two of whom are government officials, are currently ‘known to the police’, and have access to our Treasury whether through State contracts or their jobs.
We need campaign finance reform. Badly.

Apart from Burke having been arrested and McDonald being under probe by the Integrity Commission, the president is currently under investigation for receipt of a housing allowance while living in state housing.

While some netizens thought that the security detail at President's House should be under scrutiny, others felt that the fact that McDonald was being reappointed at all spoke volumes about the prime minister's judgement. There was no doubt that Prime Minister Rowley got the message, though — by July 2, it was announced that McDonald had been fired.

Marlene McDonald has been fired from the cabinet again according to a release from the Office of the Prime Minister pic.twitter.com/yedO86fxH5

[Prime Minister] Rowley is believed to have asked McDonald to resign on Saturday, less than 24 hours after she was sworn in by Carmona. The Port of Spain South MP [minister of parliament] apparently resisted.

The Office of the Prime Minister gave no reason for McDonald’s sacking but, almost certainly, it was related to her choice of guest at the swearing in ceremony as she turned up with Cedric ‘Godfather Burkie’ Burke amongst her entourage.

The post went on to say that despite his registered businesses, Burke “is also touted as the president of the Rasta City gang and was arrested under the Anti-Gang legislation during the 2011 State of Emergency. He was also arrested, two years later, during a raid in Sea Lots when police described him as ‘a major player’ in the area.” Wired continued:

When Burke was arrested during the State of Emergency, police apprehended him at the Hyatt hotel where he had been paying in excess of TT$900 a night in cash during his stay.

McDonald insisted Burke was a good fellah—in the nicest sense of the word. […]

Once news of McDonald's sacking broke, Twitter lit up with the hashtag #ThingsLongerThanMarleneWuk, through which netizens shared examples of things that lasted longer than McDonald's ministerial appointment:

#ThingsLongerThanMarleneWuk her community leader's tie in the picture

The conversation between Rowley and Marlene this morning #ThingsLongerThanMarleneWuk

Jack Warner is the former embattled vice president of FIFA, who has a speech impediment.

Some Twitter users, however, took the opportunity to focus on the underlying issue that allowed something like this to happen in the first place:

#ThingsLongerThanMarleneWuk the continued acceptance of sub-par governance from both parties ?